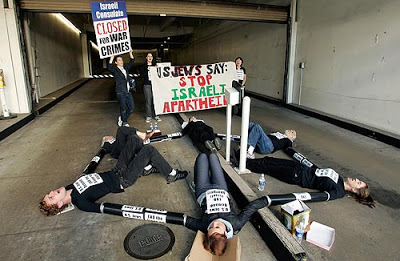 Photo by Mel Melcon / Los Angeles Times.
‘Jews will not allow the violence that is being done in our name to continue,’ Hannay Howard said. ‘Not all Jews are united in support of Israel.’
By Ruben Vives / January 14, 2009

Demanding an end to military action in Gaza, eight to 10 Jewish activists chained themselves Wednesday morning to the Israeli Consulate building on Wilshire Boulevard.

Other activists who were not chained to the building walked in a circle outside the consulate, chanting: “Let Gaza live! End the siege now.” One of the signs they carried read: “The Israeli consulate has been closed for war crimes.”

Hannah Howard, a spokeswoman for the International Jewish Anti-Zionist Network, which is conducting the protest, said demonstrators chained themselves to the front steps of the building at 8:30 a.m. and that two others blocked the walkway. Several more stood in front of the driveway on Wilshire Boulevard to prevent cars from entering and exiting. About 50 protesters participated in the demonstration, she said.

“Jews will not allow the violence that is being done in our name to continue,” Howard said. “Not all Jews are united in support of Israel. We [also] recognized the humanitarian crisis in Palestine.”

The consulate is on the 17th floor of the building at 6380 Wilshire Boulevard, and many other businesses have offices inside.

No arrest were made at the demonstration.