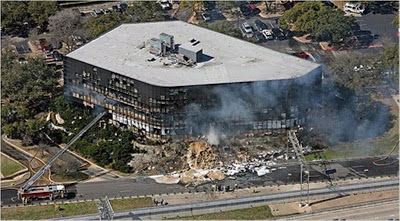 Writing fiction is a curious business. Given that most fiction is generated from one’s past experience, one finds oneself stroking a lamp whose vapors snake around through lost time, evoke its smell, and sometimes even genie up the future.

Joseph Stack’s alleged kamikaze attack on an IRS building in Austin was creepily like the events described in my novel, Skulk, written three years earlier:

Frustrated, well-educated, white Americans with trenchant analyses of what’s going on decide to provide America with a teaching moment to kick some ass in a stuck system. They both use or steal single engine planes, and crash them into a local building creating scenes reminiscent of 9/11. They both publish manifestos of dissection and complaint.

Initially, all of this provoked merely a slight smile and a squinty-eyed shaking of my head until the final similarities began to fall into place: embryonic net-rumors of a plot behind the plot, the possible involvement of false flags and patsies and government manipulation.

(Google “stack irs oddities” for a start, or link here or here for good introductions to this material.)

It’s too early, and the evidence too skimpy and tenuous to come to any conclusions about the Stack affair. But what has resonance for me is this: in Skulk, although the protagonists were involved in a pedagogic plot of their own, and stalking a possible accomplice, they were simultaneously being stalked by their stalking beast, a secretive department store Santa with an odd knowledge of martial arts, explosives, and access to tools.

Skulk might have been about a simple, if extreme, act of pedagogy. It was planned that way. But while writing, smoke from the past and a whiff of the future curled back into the text, and Santa began to infiltrate the plot, bringing gifts as usual.  ”Gift” means “poison” in German.

So I was struck by this new development in the Stack story, and wonder about how right-on predictive Skulk actually was. Is the MSM reporting as mendacious as that in my novel? Who has been black-hooded? Who benefits by the obscurity?

One thing can be said: Skulk is a lot richer and funnier than the current initial and investigative reporting. Check it out. 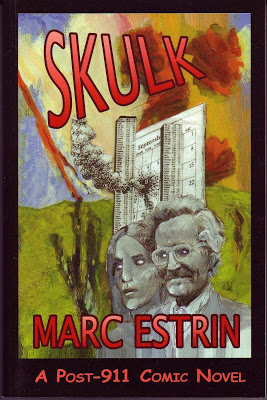