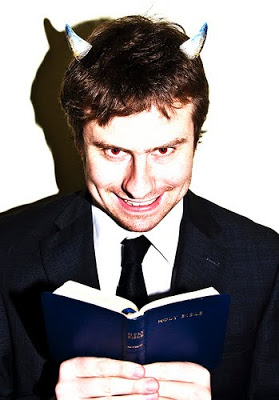 Image from ChernobylBob / Flickr.
THE DEVIL CAN QUOTE SCRIPTURE

I am involved in Vermonters for a Just Peace in Palestine/Israel, a group made up of Jews, Palestinians, members of various Christian faiths, and peace groups.

Our work is to “to support the survival of the Palestinian people and to end the illegal, immoral, and brutal Israeli occupation through education, advocacy, and action. We are committed to the principles of self-determination for the Palestinian people, the right of return for Palestinian refugees, and full civil and political rights for all Palestinians in order to promote the equality and safety of both Palestinians and Israelis.” (mission statement)

We host Salaam/Shalom, a weekly hour-long program on community television, and an exemplary, deep website for all levels of interest which gets upward of 30,000 hits a week. I recommend you take a look.

At the moment, we are having a discussion among us which is so interesting I thought I would share it in my weekly blogging:

At our last meeting, one of the Palestinians among us, passionately proposed that we jump on Gen. Petraeus’s recent statements to the effect that America’s unquestioning embrace of Israeli policy is putting our military at greater risk. In a subsequent email to the group he argued that

We should quote the general’s statements because the public trusts our military leaders more than our political leaders who are responsible for putting our troops and officers in harm’s way.

Several members chimed in supporting him. My response to them was:

I do not trust our military leaders, and I don’t think VTJP should fly under their banner just because some may — in this particular case — help our cause for their own, quite different reasons.

VTJP’s endorsing and trumpeting military opinion would be a very cynical, manipulative approach. Petraeus, especially, is a dubious character, toadying when it advances his career, opposing when tactical, and currently angling for a shot at the presidency. He has been a central advocate for escalating in Iraq and Afghanistan, and prepping the country for a decades-long war.

I would not support VTJP marching under his flag, and would myself not do so.

To this, others argued that we would not be flying under a military banner, only buttressing our arguments with their own. To which I responded:

What are Petraeus’s and any other similar statements saying?

That our embrace of Israel threatens the success of our “getting the job done” in Afghanistan and Iraq, and perhaps the actual lives of our “brave men and women” in “harm’s way.”

Yes, we can extract the one part of his (correct) observations for our own uses, but that is just another — and more ethically bankrupt — use of quoting out of context. The critic writes “this play was the most tremendous waste of two hours I’ve ever spent,” and the production lists “tremendous” in it’s ads.

It’s not as if we don’t have plenty of other facts and arguments, and plenty of other group support (like the entire world except us, Israel, and the Marshall Islands) to use. Quoting the devil to make the case for scripture seems equally pernicious to me as its converse. We cannot use U.S. generals for our needs without implicitly supporting the context of their statements and their goals.

Red is a beautiful color, but not when it’s streaming from the face of a wounded child.

Another person chimed in with a thoughtful compromise, suggesting that we could include provisos such as “While we strongly oppose the current U.S. wars in Iraq and Aghanistan, we recognize the value of Gen. Petraeus’s opinion about the regional effects of Israel’s constant occupation and aggression, and its potential danger to our soldiers.”

To which I responded with a mailing headed “Take back the Swastika”:

Some of us have been standing five days a week for eight and half years from 5 to 5:30 at the top of Church Street holding various signs against various wars, foreign and domestic.

Occasionally a camo-ed counter protester stands on the other side of the street, with a “Support the Troops” type of sign, and an American flag — which I really like, as it sets up a kind of dialectical arch of discussion over Pearl Street, and raises the visibility of the issues.

Even more occasionally, we are approached by “one of us,” a liberal, progressive, peace and justice oriented passer-by who passionately suggests that we, too, hold an American flag. “Why do you guys want to cede the flag over to the warmongers? It’s our flag, too. We need to take it back. Peace is patriotic.” Stuff like that.

Hearing such suggestions always brings to my thought-experiment mind a parallel demand: Take back the swastika! After all, the Hakenkreuz is an ancient, multi-cultural symbol of beneficent cosmic energy and movement. Why should we cede it to the Nazis?

OK, so then let’s have a peace vigil with someone holding a swastika sign, and explain its true origins and uses to those — if any — who question us about it. It would deepen the discussion, set the peace movement in a wider, timeless, universal context. Why not?

Why not is because certain dissociations can no longer be made. We can add all the “provisos” and footnotes we want to no avail.

In quoting the military with approval, we cannot help but appropriate its goals. And the American public, “cynical” as it may be, is aware of, and attaches those goals to the very statements we propose to tout. As the pop song says, “You can’t have one without the other.” With the horse comes the horse shit.

And I’m not just talking effective, pro-Palestinian tactics. I’m talking self-pollution for VTJP. As I said before, it’s not as if we have such poor soil to work with that we have to dig into the military dung heap.

Another person suggested that we could use the Petraeus material to simply “focus on security,” an issue that “has some emotional and psychological legitimacy.” To which I responded:

I would be equally opposed to arguing “national security” as a reason for BDS or cutting support for Israel. And for the same reasons: “National security” and fear are the trump cards of lying and manipulation. We should not be playing the same hand as Cheney, Obama, and Netanyatu. In using it, we legitimize and support such arguments.

To avoid cynical tactics, our cards must be primarily ethical, appealing to Kant’s difficult “moral law within.” It’s there in everyone, and if it isn’t, we can’t persuade them to become another kind of beast. It’s there in most Americans and Israelis, though it’s buried beneath years of brainwashing, junkshot detritus and ignorance of facts. Our job is to drill deep to get to it. Not every excavation means BP and Halliburton.

I wouldn’t even be opposed to secondarily arguing on a financial level. While it is hardly “the moral law within” to want to keep what’s in your pocket, one can certainly argue for more productive uses of our tax dollars than for slaughter and oppression.

I would ask the few who actually read my blogging to let me know what — beyond the particulars of the Israel/Palestine conflict — you think about this. Can one, should one, use an opponent’s language and the arguments implicit within it, to promote an opposite cause? Do let me know what you think.

In The Lamentations of Julius Marantz, I wrote what I think of as an exquisitely nasty, satirical chapter illustrating warmongers using exact peaceworker language to the T. I won’t take up the space in an already too-long blog entry, too much quoting myself, to include it here. But here‘s a link if you’re interested:

To me, using language or tactics in this way is an example of Orwell’s prophetic elucidations of Newspeak. War is Peace.

2 Responses to Marc Estrin : The Devil Can Quote Scripture