Mariann Wizard : ‘I Have No Nostalgia for the 60s’ 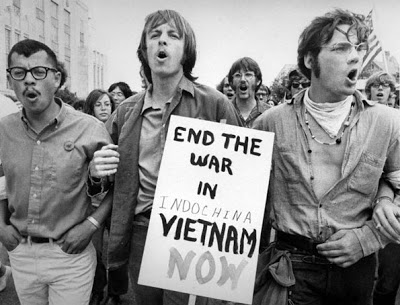 Sixties anti-war demonstration in Austin.
‘We glimpsed, briefly, the power people can wield when mutual interests are clarified by adversity’
By Mariann Wizard / The Rag Blog / July 29, 2008

“When we attacked the Moncada, none of us dreamed of being here today; we didn’t have such dreams even when following the Commander in Chief’s orders. We entered this fortress victoriously on January 1st, 1959, exactly five year, five months and five days later. Most of us were twenty or thirty some years old, some were even younger, and half a century seemed to us an eternity. But if there is something we have learned well it is that time flies, therefore, to waste it away out of inertia or hesitation is an unforgivable negligence. We must take advantage of every minute and learn fast from every experience, even from our mistakes, since they always teach a lesson if they are seriously analyzed.”

From Cuban President Raul Castro’s speech on the 55th anniversary of the attack on the Moncada and Carlos Manuel de Cespedes Barracks, July 26, 2008.

I have no nostalgia for the 60s. They weren’t generally happy times, although as young people we made our own happiness. Objectively, they were years of war, injustice, death, fear, persecution, and frustration. Those of us who fought together for peace, justice, self-confidence, and freedom, and who survived, formed bonds that go beyond friendship, and in fact often have little to do with close personal association. We glimpsed, briefly, the power people can wield when mutual interests are clarified by adversity. Many of us believe we are approaching a similar time.

Those who were “revolutionaries” then, and who are honest now, know that we all made mistakes. We didn’t have a clue what we were doing most of the time. We were cut off from earlier rebel generations by brutal repression, intensive propaganda, and our own arrogance. We had only books to learn from, and our own scrapes and bruises. We know we have unfinished business: we still have no peace; we still have no justice; we still have no freedom; and we still too often mistake arrogance for leadership. This is why, I think, so many of us return to the unresolved discussions and debates of our shared, misspent youth; not because we miss it — goddess save us from a re-run! — but because we want to at last get it right.

Have we learned from our experiences, not only of the 60s, but of all the intervening years, how to work effectively for social change? Or are we still clueless? How much longer do we have for the serious analysis that is needed?

This is a reply to the response posted on the Rag to Mariann’s piece on nostalgia [see below].

I would want to say that I didn’t think there was anything bitter about the article at all.

And I did want to say that I continued my activities in community organizing after finding myself caught up in our own version of a disapora. I feel I learned a lot, and much of it built on the work I did with y’all.

One thing that was so dramatically presented to me that I will never forget, was a scene from the video documenting “The Dinner Party” featuring the artists and the process Judy Chicago and her co-creators used to develop the project. (If you don’t know who she is, I think it well worth your time to look her up.) She was sitting in a dinner party with the group and a feminist neophyte asked why women had to look up their herstory almost every generation, or some such. I thought Judy was going to come unglued as she pulled herself up to the whole of her height at about 5′, and launched into a lecture in which she practically shrieked something along the lines of, “Because they are too fucking lazy to read and research their own history. Do you think the Chinese peasants just one day picked up their pitchforks and seized state power? No, they read, they formed study groups, they learned their history and they studied economics.’

So one of the things I feel really great about was our work in study groups with the New Left Education Project, with the Rag, with the class i presented on women’s history in Labor before there was a Women’s Studies Department, and I feel especially wonderful when I reflect on the Women’s Liberation Front “consciousness raising” sessions and the many classes we gave in university classrooms on sexism, and the actions we took on sexist assaults in the community. (Who will ever forget the spray painting we did on the “Bust ’em Bevo” “spirit sign” that would certainly have led to a bloody riot if Judy Smith hadn’t coolly stepped up to the plate, and if we hadn’t had the loving support of Paul, Henry, David R and Wayne, who, bless them always, spent the rest of their day on the West Mall talking with men about sexism.

I love that I saw the paradigm shift from sitting in a meeting in a theater style to sitting in a circle. That single action continued since in all places and times probably did more to undermine the hierarchy construct that is so fundamental to the maintenance of patriarchy in this culture as anything else we’ve done.

So, I’ve got it. I make an effort to know my herstory, I currently participate in a reading/discussion group focused on what I’m interested in now, feminist spirituality, and I promote educational seminars in local, state and national groups of women, and generate intense experiences I refer to now as “consciousness deepening weekends for women,” and upset everyone by raising issues around class and race.

My movement associates were unable to get me to separate myself from what Jeff and David used to snortingly refer to as “petit-bourgeosie mysticism” and my current spiritual feminist sisters just wish I would shut up about the issues of class and race, if I would just drop any kind of analysis and grok out, their lives would be more pleasant, they think. But I have come to find that my truth is that I do have Tarot cards in one hand and an analysis of patriarchal oppression in the other in which Marx is not forgotten, Lenin is understood, and the multinationals are not invisible, and I, like the Hindu goddess Durga, have more than two hands, thus more than the binary reality we think of as true, and this is increasing in the culture of the computer. While I am mindful of Mao’s commentary, “True power comes out of the barrel of a gun,” I have also moved through so many corridors of power within and without that I feel I can stand in and on my own power at any moment — and that was surely one of the great of the journeys of my lifetime. Empowerment has been a central challenge of our generation, particularly for my generation of women.

Another little piece of my pie is my understanding that consciousness is changed pretty much one person at a time, although there may be moments in which the common experience is so intense that a paradigm shifts for the whole collective mass gathered there. We certainly saw that in our marches, demonstrations, music and theater. If we had had more time, there is no telling how many lives we would have affected — we affected enough to put 100,000 people in DC intent on shutting it down, and that’s when they stopped lest they have to shot their children.

I am pretty clear by now that my work will remain with women, and so I continue to seek ways and spaces in which to generate a collective consciousness shift while continually trying to introduce a consciousness of the continuing oppressions of classism, racism, and sexism. In this, theater is important, as is the work in general of the poets, writers and artists, visual and performance, who are the heart and soul of any revolution. In the bigger picture of politics I am not seeing the kind of contribution we supported from the likes of Bob Dylan today. I am willing to be corrected.

Anyway, I think Mariann’s observation was valuable. I have and continue to reflect on constructs of strategy and tactics we learned together in my various activities, and I think we would be well-served not to just warmly reflect, but to also name what we did well and give it some thought about what we maybe ought to be doing again.

3 Responses to Mariann Wizard : ‘I Have No Nostalgia for the 60s’