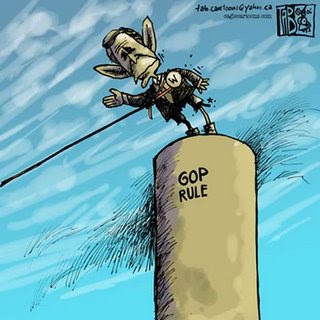 I had a long conversation recently with a close friend who is usually a few steps ahead of me in political facts and analysis, and thought I would share a few thoughts with the Raglist that I took away from this discussion:

1. Be serious for a minute: Barack Obama is a progressive and even left candidate whose election should, at a bare minimum, open new opportunities for progressive ideas to prosper, but he is not a revolutionary or a radical politician. We here in the US are not in a revolutionary time quite yet, and nobody becomes President (or US Senator!!) without significant, substantial establishment support and ties. By “establishment”, and looking closely at the US economy, that is going to include some elements of the defense industry and of the oil industry. In order for progressives to work successfully during an Obama administration, it should be our prime order of business to determine exactly what elements of the establishment back him, and on what hopes and expectations that support is based. (We used to call it “power structure research”).

2. Karl Marx theorized, and history amply demonstrates, that advanced capitalist societies produce a surplus labor force (too many unemployed young people) which must be siphoned off periodically in order to avert revolution, and that war is the most efficient way to do so, since it simultaneously creates markets for products that must be replaced quite frequently, e.g., bombs, mortars, helmets, posthumous medals. I see nothing to indicate that we are anywhere close to overthrowing capitalism, and therefore will expect not only an end to the Iraq debacle in an Obama administration, but an expanded US presence in other parts of the world, say, in East Africa, where US advisors are already on the ground*. Had Hillary won the Democratic nomination, as she made abundantly clear in speeches beginning (to public knowledge) last January, a resumption of the Cold War would be in order; she doesn’t trust the Russians to “safeguard the resources of Siberia”. The real opponent in both scenarios is China, with skirmishes (hopefully) fought mostly by surrogates, without disrupting the flow of trade.

3. I firmly believe there is more opportunity to achieve important goals in any Democratic administration than in any Republican one. I’ve said since Dubya’s election in 2000 that I would vote for the Democratic donkey over him; that is, I would vote for whoever the Dems nominated. The last 8 years have been an unmitigated disaster for US citizens and for many other human beings, as well as other species. John McCain’s election would give us more of the same, and I will work to prevent it. However, I’m not a Democratic Party activist. I’m a peace and justice activist. Let us please not be surprised if an Obama administration, hopefully bringing about a welcome and speedy end to the Iraq conflict, finds its own bones to pick abroad, and is willing to leave the bones of US servicemen and women there, sacrifices to economic advantage for corporations whose interests trump yours and mine.

* From the standpoint of US propaganda, having a Black, half-African President while adventuring in Africa could be really great! “Racism? What racism?”

“It’s not just about Vietnam — we’ve got to set in motion a process that will also stop the seventh war from now.” — Robert M. Pardun, Oleo Strut Coffeehouse, Killeen, TX, 1969