Amsterdam : To Have Such Problems! 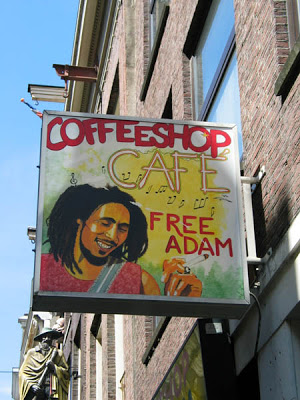 You can’t get busted for smoking weed, but tobacco is another matter.

Marijuana Is In, Tobacco Is Out
Under Netherlands’ Smoking Ban
By Martijn van der Starre / June 20, 2008

AMSTERDAM — Starting July 1, marijuana will be the only leaf that can be smoked in public places in the Netherlands. Cannabis devotees aren’t celebrating.

Local pot smokers, who usually cut joints with tobacco, and owners of the “coffee shops” where they are allowed to light up will have to change their habits when the nation implements the indoor tobacco ban. Puffing a pure marijuana cigarette in public will still be permitted; smoking one with tobacco will merit coffee shop owners a 300-euro ($466) fine for the first offense and 2,400 euros for a fourth.

“Every customer will have to learn how to smoke pure,” said Robert Kempen, co-owner of The NooN and Mellow Yellow in Amsterdam, which sell marijuana and hashish. The rule makes him “sick to death,” he said, rolling himself a joint.

Coffee-shop proprietors say the ban will put some of them out of business as smokers stay away. The nation’s 720 outlets that serve marijuana smokers generate a large portion of their revenue from selling drinks, food and rolling papers to their patrons. Dutch sales of cannabis alone totaled 1.2 billion euros ($1.86 billion) in 2001, according to the most recent figures available from the nation’s statistics bureau.

To permit tobacco smoking, shops will have to build separate, unstaffed rooms, and many say they don’t have the space or money to do so. Others are investing in water pipes and $400 vaporizers, initially intended to aid people with lung problems inhale medicine, to help smokers light up without tobacco.

“It’s a bad year for marijuana smokers,” said Gwydion Hydref while smoking in Coffee Shop Johnny. The Welshman works for Wickedtrips, a company that offers vacation packages, including a “no holds barred’ weekender” to Amsterdam ahead of the smoking ban. “Times have changed.”

The Netherlands follows other European countries in banning tobacco. Ireland was the first country in the region to forbid smoking in public places in 2004. Sweden, Italy, Malta, France, Belgium, Finland, Lithuania, Portugal and England and others have followed, with full or partial restrictions.

The Dutch ban, which prohibits tobacco smoking in all public places of employment to protect workers’ health, is only for tobacco and makes no change to marijuana policy, said Saskia Hommes, a spokeswoman for Dutch Health MinisterAb Klink. The government will have to see if the law is enforceable, she said.

The Netherlands decriminalized the use of marijuana in 1976, though it stopped short of fully legalizing the drug because international treaties prohibited it from doing so. The country’s first coffee shop, named after Donovan’s song “Mellow Yellow,” had opened its doors four years earlier.

Government policy toward the shops has become less lenient in recent years, with the number dropping by 39 percent in a decade as authorities cracked down on sale to young people and revoked the licenses of owners who commit crimes.

Still, the shops have devoted patrons who are upset about the latest development.

The ban is “bloody awful,” said Nima Gani, a musician smoking at The NooN. Gani plans to stop visiting The NooN and smoke his “Blueberry” marijuana and tobacco joints on the street. “I feel like my freedom is getting smaller and smaller,” he said.

To enforce the new policy, the government has more than doubled its number of food and consumer product inspectors to 200, said Bob Kiel, a spokesman for the Food and Consumer Product Safety Authority. The agents will make unannounced visits to bars, restaurants and cafes, as well as coffee shops. There are no guidelines to help inspectors distinguish between a mixed joint and a pure one, he said.

Coffee shops sell everything from pre-rolled joints for 3.50 euros each to hashish for as much as 18 euros a gram, said Mark Jacobsen, chairman of the Amsterdam Association of Cannabis Retailers. The ban will make it even harder for the shops to stay in business as visitors and revenue will drop, said Jacobsen, who is building a wall to divide The Rookies, a shop he co-owns.

“Sales will definitely fall,” said Rida Oulad, who works behind the counter at Ibiza in Amsterdam. “Why would you go to a coffee shop where you can’t smoke and the only remaining activities are sitting and watching television?”

Gani, for one, isn’t happy about the changes. He says he can’t smoke at his real home because his mother would hit him “over the head with a pan.”

Still, he has no plans to stop rolling joints mixed with tobacco: “Smoking pure grates my throat.”

This entry was posted in RagBlog and tagged Amsterdam, Drugs, Marijuana, Prohibition. Bookmark the permalink.