McCain on Iraq : Ignorant and Contradictory 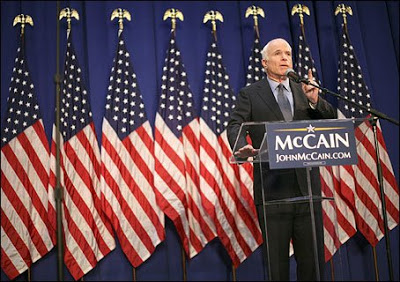 Republican presidential candidate Sen. John McCain, tells a crowd in Columbus, Ohio on May 15, 2008, that the Iraq War can still be “won.” Photo by AP.
A Confused McCain Lunges About on Iraq and the Occupation
By Sherman De Brosse / The Rag Blog / October 21, 2008

This is the third in a series by Rag Blog contributor Sherman De Brosse, a retired history professor, on John McCain, his shady involvements, past and present, and his wrong-headed and ill-informed political positions.

John McCain was in Iraq, seemed confused, and Joseph Lieberman had to lean over and prompt him. Iraq is a complicated situation, so it was easy to misspeak, and we overlooked the matter. Now he is confused about what job General Petraeus has and is talking about the Iraq/Pakistan border. He has repeatedly said that Al Qaeda operatives in Iraq were trained in Iran; although, there is no evidence to prove this. Indeed, Al Qaeda people are Sunni and would be uncomfortable in Shiite Iran. Moreover, McCain must not have known that Iran is still holding one of Osama’s eleven sons under house arrest.

The problem has become that Senator McCain misspeaks so often on this subject and contradicts himself (flip-flops?) so frequently that it has become a troubling pattern. His pronouncements on the Iraq war are so frequently simplistic and uninformed that they call into serious questions his claims about foreign policy expertise.

Just before the invasion, he put on his military expert hat, and said, “I have no qualms about our strategic plans.” It would be a quick victory and another glorious chapter in United States military history.

The ”expert” Mc Cain now brags about criticizing and rejecting Secretary of Defense Donald Rumsfeld. The fact is that it took McCain 18 months to reach that conclusion. All that time and beyond, he said George W. Bush was doing just fine. True, he did call for an increase in troop level all along.

He thought then and still believes that the Iraq War could be won if more troops on the ground increased the level of physical security. That seems to be his definition of “victory.” Even many with stars on their shoulders claim victory must be defined as a political settlement that brings peace and reconciliation between the different factions in Iraq. That has not come about, and McCain has never explained how he would accomplish this. Barack Obama has always defined victory in these terms; and he has set the standard for the defense of the surge in the same way. McCain does not seem to see any relationship between a good political settlement and victory. So maybe his criticisms of Barack Obama on the success of the surge are honest and not some cheap political slight of hand.

Maybe McSame reaches the conclusion that the Iraq insurgence and war will be imposed on the ground by military force because he sees this through the prism of a foreign policy fundamentalist—good v. evil. Simple as that.

For quite a while, he was warning that the Shiites could take over Iraq. He sang this odd song long after the Bush Administration had decided to ally with the pro-Iran Shiites. One wonders if he knew that Shiites and the Sunni Al Queda do not get along over a significant period of time.

Of late, he sounds the alarm that Al Qaeda could take over. Al Qaeda was never more than a tiny presence there. We and some of the Sunni states in the region touted Abu Musab al-Zarqawi as a powerful Al Qaeda leader, even though he did not get along with Osama bin Laden. Since the Jordanian intelligence killed Zarqawi, his small organization in Ramadi has collapsed and other wannabe Al Qaeda leaders cannot even be found there.

Still McCain droned on about Al Qaeda in Iraq and how Iraq is the center of the War on Terrorism. In an interview with Bill Bennett, he said of Al Qaeda, “These guys want to follow us home… It is not Iraq they are after, my friend. It is us.” His insistence on that central role of Al Qaeda in Iraq suggests that he might still think that Iraq was somehow behind 9/11.

In February he again warned that the Al Qaeda could take over Iraq. Al Qaeda had only appealed to a tiny segment in the radical religious element among the Sunnis.

And now almost no one identifies himself as Al Qaeda. An aid, who must have understood a little more, tried to explain the claim by saying the Senator meant that Sunni extremists might create a small state there. Of course, the Shiite majority would destroy it and would even have the help of Jordan and the Kurds, neither of whom can brook Sunni religious extremists.

Lately, McCain has been claiming that the surge made possible the “Anbar awakening” — the decision of some sheiks to come over as US allies. The problem was that the “Anbar awakening” occurred four months before the Surge began. McCain insisted to Katie Couric that his position was an historical fact and CBS cut that segment rather than air footage that would embarrass McCain. That occurred the same day that his campaign distributed information that the media was overwhelmingly in support of Obama.

He has also bragged how the Surge has protected those sheiks even though their leader, Abddul Sattar Abu Riisha was murdered in September, 2007, during the surge.

Months ago, 141 members of the Iraqi parliament voted that the US should establish a timeline for withdrawal. Now Prime Minister al-Maliki has all but endorsed Obama’s 16 month time frame, and the Bush administration might be moving closer to that position.

One wonders if Mc Cain can find a way to get in line with these new developments. Perhaps, since he has been able to take positions that are completely inconsistent with the facts in Iraq. He may well get away with flip flopping, clinging to historical inaccuracies, and a policy that does not really define victory. Most people do not know much about Iraq and there is no evidence that the corporate media will call him on flip flopping or misinformation, There is widespread opposition to the war, but it is pretty thin. Current polling information suggests that McCain may not have to pay for Republican mistakes in Iraq so long as casualties there remain relatively low.

McCain put the Iraq question on ice by repeating his angry assertion that Obama will not recognize the Surge was a success. He probably is not confused — simply dishonest — when he overlooks the fact that the Sunni chieftains allied with the United States — the so-called “awakening” — before the Surge began. This is also true of our decision to pay fighters $300 a month to refrain from violence. So, he still has some truth on his side as American casualties are down. But the main criteria for success was buying times for the Kurds, Sunnis, and Shia to resolve their differences. There has been no progress here.

The surge has had some success because it has placed large parts Iraq on lockdown. Our policy there permitted ethnic cleansings in neighborhoods to be completed long before the surge started. With neighborhoods cleansed, all that was left was for the US to come in and wall it off or lock it down, like a cell block. That will reduce the level of violence for a time, but it is not a long term solution. Now people trying to return to their homes are being killed or subjected to violence. The flow of Christians out of the country or into monasteries and protected enclaves has now reached a floodtide. In this matter McCain’s lack of accuracy probably represents a combination of confusion, opportunism, and disinterest in specifics.

Barack Obama must show that the Surge has only worked in a limited way and demonstrate that McCain’s many misstatements on Iraq are not mere gaffes. They show genuine confusion and — yes — almost profound ignorance. After all McCain’s trips to Iraq and attendance at Senate hearings, it seems to be a sad fact that he is either a prisoner of an outworn ideology, or worse, he has a very poor learning curve. This is no time to put foreign affairs in the hands of an impulsive man who cannot master specific information. We honor this hero for his service to this great republic, but it is too dangerous to reward him with the presidency.