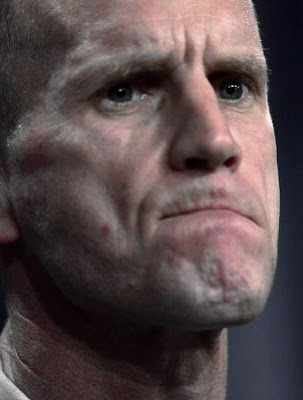 Gen. Stanley McChrystal: Repeating the cliches.
Do the numbers:
500,000 troops for Pashtunistan?

Gen. Stanley McChrystal, the U.S. commander in Afghanistan, talks of winning the hearts and minds of the Afghan people. He sees the need to get beyond standard military thinking and understand the political, religious, social and economic context. He also knows that kicking down doors, destroying homes and killing civilians turns the Afghans against us and creates more insurgents than we could ever kill.

In his report to President Obama and in endless interviews, the four-star general talks about persuading the Afghans, protecting them and making them secure from the Taliban. “Our every action must help secure, mobilize and support the Afghan people and their government to defeat the insurgency and establish effective governance.”

How to “establish effective government” in a country that has never known one, McChrystal does not say. Nor does he tell us how he would do it with an Afghan leadership made up of war lords, drug barons and a president — Hamid Karzai — who won re-election by creating hundreds of phony polling stations and stuffing ballot boxes in wholesale fashion.

Undaunted, McChrystal repeats the clichés of classic counterinsurgency, or COIN, as refurbished by his boss, Gen. David Petraeus, head of Central Command. American generals used the same vintage phrases in Vietnam, where efforts to “protect the population” led to forcing rural peasants into fortified “strategic hamlets.”

With only slight variations of emphasis, French generals spoke the same lingo earlier in Vietnam and Algeria, while British generals became the gurus of counterinsurgency from Malaya to Kenya to Cypress. In these conflicts, one problem stands out: The counterinsurgents most often lost, as did earlier invaders in Afghanistan, from Alexander the Great to the British Raj to the former Soviet Union.

But why let all this history get in the way? “Each historical moment is different,” the learned Obama warned us with a flourish from the Greek philosopher Heraclitus. “You never step into the same river twice.”

Forget history, then, and stick with military thinking. The new counterinsurgency manual that General Petraeus produced calls for “a range of 20 to 25 counterinsurgents for every 1000 residents” in the area of operations. Afghanistan has a population of some 30 million, which would require 600,000 to 750,000 counterinsurgents, including American, allied and Afghan troops.

Frederick Kagan, the neo-conservative military strategist who advises both Petraeus and McChrystal, talks of limiting our counterinsurgency to the Pashtun areas of Afghanistan, leaving the Tajiks, Hazaras, Uzbeks, and other of the country’s ethnic minorities to fend for themselves. Kagan estimates a Pashtun population of some 16 million, which would bring the counterinsurgent troops needed down to somewhere between 320,000 and 400,000.

Either way, having enough troops in no way guarantees victory. But, according to Pentagon doctrine, having too few would make it almost impossible to subdue a determined insurgency, especially in Afghanistan’s mountainous terrain.

America now has some 68,000 troops in Afghanistan. Obama has already authorized another 21,000, and General McChrystal is asking for 40,000 more. This would bring the American commitment to 129,000. Allied troops number 35,000, and the Afghans currently have 88,000 soldiers and 82,000 police. This would bring the total to 334,000, if McChrystal counts on the Afghan forces, which most experts do not. Washington is asking for more troops from our reluctant allies, while McChrystal plans to increase the Afghan total to 400,000 by 2014.

Would this be enough to win? Secretary of Defense Robert Gates is reportedly having second thoughts. “Even 40,000 more [American] troops don’t give you enough boots on the ground to protect the Afghans if the north and west continue to deteriorate,” one official told The Wall Street Journal. “That may argue for a different approach.”

Gates has previous voiced the fear that too many foreign boots on the ground will only encourage more Afghans to join the insurgents, as the Soviet learned.

Others, like Sen. Russell Feingold, fear that foreign boots in the Pashtun area of Afghanistan will force more of the insurgents into the tribal areas of Pakistan, where they would meld into a population of over 25 million Pashtuns. How many more troops would General McChrystal need then?

[A veteran of the Berkeley Free Speech Movement and the New Left monthly Ramparts,Steve Weissman lived for many years in London, working as a magazine writer and television producer. A former senior editor at Truthout, he now lives and works in France. For previous articles by Steve Weissman on The Rag Blog, go here.]

This entry was posted in RagBlog and tagged Afghanistan, Gen. Stanley McChrystal, Vietnam. Bookmark the permalink.

1 Response to McChrystal Clear : More Boots on the Ground