Measuring Up On the Evil Meter

I mean, read the first sentence of what Junior says. Read it!!!

Be Afraid, Bush. Be Very Afraid.
By Jerome Doolittle

Still mongering fear after all these years of plummeting polls, America’s protector spake thus this week to his troops at the Department of Homeland Security:

We’re in a battle with evil men — I call them evil because if you murder the innocent to achieve a political objective, you’re evil.

The events of September the 11th, 2001 demonstrated the threats of a new era. I say “new” because we found that oceans which separate us from separate — different continents no longer separate us from danger. We saw the cruelty of the terrorists and extremists, and we glimpsed the future they intend for us. In other words, there’s some serious lessons on September the 11th that it’s important for all Americans to remember.

Two years ago, Osama bin Laden warned the American people: “Operations are under preparation, and you will see them on your own ground once they are finished.” All of us, particularly those charged with protecting the American people, need to take the words of this enemy very seriously. And I know you do.

At this moment, somewhere in the world, a terrorist is planning an attack on us. I know that’s an inconvenient thought for some, but it is the truth. And the people in this hall understand that truth. We have no greater responsibility, no greater charge, than to stop our enemies and to protect our fellow citizens. 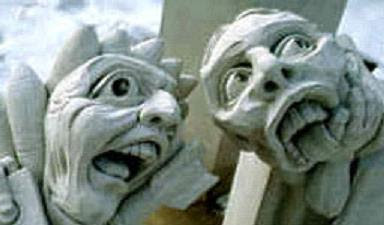 The wonder of it all is that the nation doesn’t collapse in laughter or shame or both when Bush trots out this evildoer stuff. Let us start by understanding that most fights are not between a good guy and a bad guy. Most fights are between two bad guys. The good guys aren’t hanging around bars looking for trouble; they’re home playing with the kids or watching other people fight on TV.

So, in the interest of reason and common sense, let’s drop all this crap about what a rotten swine Saddam was. Of course he was. He deserved to die a thousand times over.

Let’s put him at ten on the evil meter, okay? And let’s assume that leaving this butcher in power over the last five years would have resulted in the murders of 100,000 innocent Iraqis.

Now let’s do the math, our unit of measurement being Iraqi corpses. According to every calculation of Iraqi casualties, even the Pentagon’s, George W. Bush outscores Saddam on the evil meter by at least five to one and probably closer to ten to one.

Set against that pile of corpses Bush’s good intentions will count for nothing when his personal End Time comes. St. Peter knows what the road to hell is paved with; if Bush actually believes in a Judgment Day, he’d better hope he’s wrong.