“The Great White Fleet” Comes to the rescue in Italy, 1909.
American ships, sailors and soldiers:
A history of sea power and disaster relief

But there is always one critical jackass who gets it all wrong and tries to take the good guys to task.

The jackass in this case is a well known Italian politician, Guido Bertolaso. He is Italy’s national civil defense director and their special envoy to Haiti. A few days after the Haiti quake Mr. Bertolaso made a quick visit and immediately issued scathing criticism of the effectiveness of the entire relief effort to the international press before his superiors could call him quickly back home.

He particularly singled out the U.S.-led efforts calling them a “pathetic” failure. His blistering remarks included an observation that America, “… when confronted by a situation of chaos, tends to confuse military intervention with what should be an emergency operation, which cannot be entrusted to the armed forces.”

You bet Guido. You seem to know even less about your own country’s history than many politicians your age here in America know about ours. The irony is that you must have missed reading about the big historic commemoration in Italy in 2009 recognizing relief efforts for a terrible Italian earthquake in 1909.

The huge celebration singled out America and its military for our help and generosity in Messina 100 years ago. You know, Messina, Guido, down in Southern Italy? Coverage of the celebration was in all the Italian newspapers.

So, here’s a quick history lesson for everyone about the effectiveness of the American military in earthquakes. I found a scholarly article by Prof. Jeff Matthews, an expat scholar, historian and teacher who has lived with his wife in Naples, Italy for decades. His English language, web based, “Around Naples Encyclopedia,” has a worldwide following.

His latest article, reprinted below, spurred me to report on this historic connection between today’s American military help in Haiti and our much earlier help in Italy.

Mr. Bertolaso’s own government has loudly denounced his wrong-headed criticisms of the USA. Perhaps they can get him to bone up on things like the history below. . . before he heads out again as their international envoy, civil defense expert and spokesperson. 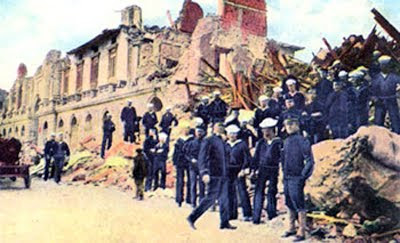 The Great White Fleet and the Messina earthquake

On July 27, 1909, the New York Times reported that “The first baby born in a new house in Messina was named Theodore Roosevelt Lloyd Belknap Palmieri!” This was Mr. & Mrs. Palmieri’s tribute to those American politicians and diplomats who had organized the relief effort in aid of the city of Messina, Italy, devastated by a powerful earthquake on the morning of December 28, 1908.

The quake killed about 60,000 people and destroyed much of the city. (Some estimates of the number of dead are as high as 200,000.) In the months following the quake, U.S. aid was considerable and — to explain the “new house” in the above quote — included the building of 1,500 frame houses. The rest of the name: Teddy Roosevelt was U.S. president at the time of the quake; Lloyd C. Griscom was the U.S. ambassador to Italy; and Reginald Rowan Belknap was the US Naval Attaché in Italy. [See American House Building In Messina And Reggio: An Account Of The American Naval And Red Cross Combined Expedition (1910) by Reginald Rowen Belknap, pub. G. P. Putnam’s Sons, New York and London.] 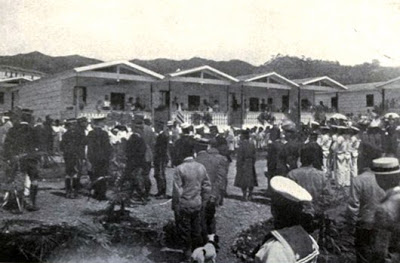 One of 1,500 sturdy wooden frame homes built in Messina with U.S. aid.
The early aid was immediate and direct. It came in the form of ships from the U.S. Great White Fleet, which was circumnavigating the globe and, at the time of the quake, found itself in the “home stretch,” as it were, of a cruise of 43,000 miles — 16 modern warships, employing 15,000 men — in a brash display of young U.S. sea power.

The cruise lasted from December 1907 through February 1909 and was under the command of Admiral Charles S. Sperry. The Great White Fleet went from Hampton Roads, Virgina, around South America and up to San Francisco; then, across the Pacific to Australia, the Philippines and Japan, and then across the Indian Ocean, through the Suez Canal, west across the Mediterranean, through the Straits of Gibraltar and back home across the Atlantic.

The fleet was in Egypt when it received news of the Messina earthquake. The flagship, Connecticut, with support vessels, arrived in Messina on January 9, 1909, with thousands of pounds of food, medicine and temporary shelters for survivors. About 17,000 persons were pulled from the rubble, their lives saved by the heroic efforts of the combined search and rescue crews of the U.S. ships and of vessels of other nations that were near Messina at the time of the quake.

The U.S. ships docked at the port of Naples during operations, and their presence is noted in the January issues of il Mattino, the Naples daily newspaper. The fleet stayed until late January and then left for home. In January, 2009, 100 years after the fact, ceremonies were held in Messina to commemorate the international effort that helped the city through the tragedy. I really do wonder what happened to Theodore Roosevelt Lloyd Belknap Palmieri. I hope he had a fine life.

2 Responses to Messina Earthquake of 1909 : The U.S. and the ‘Great White Fleet’