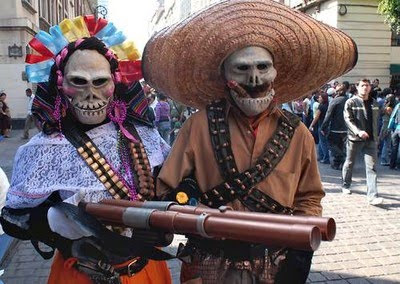 MEXICO CITY — Every hundred years on the tenth year of the century, Mexico seems to explode in social upheaval. In 1810, the war of liberation from the Spanish Crown unleashed a genocidal decade-long conflict. In 1910, the overthrow of dictator Porfirio Diaz triggered a fratricidal bloodbath. In recent months, dire expectations that 2010 would signal similar violence have been running high in this distant neighbor country, mired as it is in a grinding depression where 80% of Mexico’s 107,000,000 citizens subsist in and around the poverty line.

It is now the tenth of January 2010 and no new revolution has broken out — yet.

Nonetheless, the New Year was welcomed in here with a blast of revolutionary fireworks: bank bombings in Mexico City, surrounding Mexico state, and San Luis Potosi in the distant north, blew out a dozen ATM machines. Walls were scorched and windows shattered by firebombs at three auto showrooms in the greater metropolitan area and the government palace in the Mexico City delegation (borough) of Milpa Alta (an explosive device failed to ignite in Ixtapalapa, the capital’s most conflictive demarcation).

Incendiary attacks also struck a Telmex branch office, the Mexican phone monopoly owned by Carlos Slim, the richest tycoon in Latin America. A slaughterhouse and a police car were also firebombed. In Tijuana on the northern border, an anarchist group claimed to have machine-gunned three municipal police vehicles and a private security patrol car to welcome in 2010 in addition to “expropriations” at seven OXXO convenience stores during one of which a police officer (“placa”) was killed.

“It was either him or us,” lamented a communiqué from the purported perpetrators who signed off as “another anonymous anarchist action” in a document posted January 2 on “Conspiracy of Fire,” a direct action electronic clearing house.

The spate of bombings by anarchist cells was similar to a string of 15 such incidents in Mexico City and Guadalajara timed to coincide with Mexican Independence Day last September. A student activist at the National Autonomous University was jailed briefly by federal police for several of the fiery assaults in September and released.

Among the groupings that claimed responsibility for the actions that took place between December 31 and January 2 were the Propaganda Of The Deed Brigade which posted a declaration of war on the Conspiracy of Fire page that read in part,

With this document, we declare a war that will not end until all business people, the Bourgeois, militaries, governments, and all kinds of totalitarian power are exterminated.

What has happened today is just a small demonstration that we have lost our fear and our hatred of the system has grown. They can no longer kill or jail us with impunity. We are not afraid. Un Ojo por Un Ojo! (‘An Eye for an Eye’).”

The document and two other communiqués taking responsibility for the bombings made explicit reference to the exorbitant cost of government celebrations of both the centennial of the revolution and the bi-centennial of independence and noted that “although we do not believe in absolute dates, 2010 will be a year of struggle and a platform of preparation for what is to come…” — the 1910 uprising led by Francisco Madero was only the opening gong of a series of revolutions that finally fizzled out in 1919 with the assassination of the revolutionary martyr Emiliano Zapata.

Among the heroes lauded in the communiqués were historical anarchist leaders Praxides G. Guerrero and Ricardo Flores Magon, the Great Zapata, the Centaur of the North Francisco Villa, and Lucio Cabanas, the 1970s guerrillero leader of the Party of the Poor. Conspicuously absent from the list was Subcomandante Marcos who 16 years ago this January 1st gave voice to the Zapatista rebellion in Chiapas in the very first hour of the North American Free Trade Agreement.

Other participants in the New Year’s Eve Molotov cocktail party were the Simon Radowisky Brigade, named for a little-known Ukrainian-Argentinean anarchist who died in Mexico in 1956 while at work in a toy factory he was trying to organize, and the “May 25th 1910 Committee of Adjudication” which takes its name from the date that Praxides G. Guerrero fell in Janos, Chihuahua, the first anarchist to give up his life in the Mexican Revolution — the anarchist-led insurrection in Chihuahua preceded Madero’s revolution by six months.

Meanwhile, in Chiapas where mass psychosis that the Zapatistas would rise again January 1 has reigned for months, the Mayan rebels’ caracoles, or public centers, were shut down tight for the first time in 15 anniversary markings of that historic rebellion.

But the Zapatista Army of Liberation is hardly the only armed indigenous force for which rebellion in 2010 is an option. The Conspiracy of Fire page features an analysis of revolutionary prospects attributed to the TAGIN or National Indigenous Guerilla Triple Alliance that predicts “the calendar of conflict will spread throughout the country in the next 12 months,” claiming that 70 armed organizations have joined forces for concerted action in 2010. The article is illustrated by photos of armed guerilleros taken at a press conference held in Guerrero last summer by “Comandante Ramiro” (Omar Solis) of the ERPI (“Revolutionary Army of The Insurgent People”) — several months later, Ramiro’s body was recovered from a clandestine grave in the high sierra of that conflictive state.

While boasts of renewed revolution fly, President Felipe Calderon, now halfway through his calamitous six years in office, sought to put a happy face on the disasters his administration of Mexico has inflicted upon the country. Speaking from sunny Acapulco where the beaches were buckling under the weight of buxom bikini-clad tourists while the rest of the country shivered in the glacial cold, Calderon urged his compatriots to celebrate “this Year of the Patria (Fatherland) with happiness, working together in each home. This year we will write pages of glory and live the flame of our values that make us proud to be Mexicans (sic).”

In what could only have been an effusion of irony, the beaming president wished his bankrupt constituents a “Prosperous New Year.” Many observers (this writer was not alone) wondered what country Calderon thought he was addressing.

The COPAMEX, Mexico’s most influential business federation, was significantly more guarded in greeting the New Year, warning Mexicans to avoid violence in celebrating the duel centennials.

Despite veiled threats from the business sector, Mexico’s working class is in an uproar. A New Year’s Day zafarancho (riot) outside a power generating substation in Mexico state between displaced members of the Mexican Electricity Workers Union (SME) trying to prevent scabs from taking their jobs, and heavily armed federal police, left a dozen injured and the nearby pyramids of Teotihuacan, the City of the Gods, wreathed in tear gas fumes.

The confrontation marked the first violence in what has been largely a peaceful resistance movement ever since Calderon shut down the Luz y Fuerza power company last October putting 42,000 workers on the street, and suggests that an increasingly frustrated rank and file is prepared to raise the ante. On January 5 and again on the 6th, bands of SME workers stormed through the old quarter of Mexico City after the explosions of electrical transformers in the neighborhood brought out detachments of federal police.

It is not mere coincidence that both the confrontation at Teotihuacan and many of the anarchist bombazos took place in Mexico state, which is governed by Enrique Pena Nieto, the presidential front-runner in 2012. Pena Nieto is a luminary of the resurgent Party of the Institutionalized Revolution (PRI) that ruled Mexico for seven decades until it was displaced from power in 2000 by Calderon’s rightist PAN party. The PRI won a landslide majority in the lower house of congress in 2009 mid-term elections and is expected to sweep all 12 governors’ races up for grabs in 2010.

In a remarkable reprise of the social unrest that detonated after runaway inflation excited hungry masses to rise up against the Diaz dictatorship 100 years ago, an abrupt jump in gasoline and diesel prices that kicked in on the final day of 2009 has set off a chain reaction of protests in Mexico City and the provinces.

On the first workday of 2010, 2000 truck drivers shut down key national highways for seven hours to protest the hikes — in Puebla, the drivers were joined by 500 electricistas from nearby Necaxa, the so-called “cradle” of Luz y Fuerza and the SME. The success of the blockade in Puebla, Hidalgo, and Veracruz states has inspired truckers’ association director Edmundo Morales to call for a national strike. Participation of the SME at the barricades may well be a precursor of increased worker solidarity in the coming year.

In Tepic, Nayarit, bus drivers protested the increase in fuel prices by parking their vehicles, paralyzing that provincial capital. Massive protests in Mexico City by independent unions and farmers’ organizations are expected later in the month.

The price surge viscerally wounds a popular economy that was grievously lacerated in 2009. The Calderon government’s annual daily minimum salary increase is less than 5% for 2010 and fails to match 6% inflation. The 2.60 peso a day “raise” does not even buy a ride on the Mexico City Metro that ferries millions of workers to their jobs each day.

On New Year’s morning, the leftist Mexico City government of Mayor Marcelo Ebrard raised the heavily subsidized Metro ticket price from two to three pesos a ride. The back of the ticket now reminds riders that the real cost is nine pesos.

A survey of public markets reported by the left daily La Jornada calculates a 30% rise in the basic food basket in the first week of 2010, largely due to fuel and electricity rate increases — tortillas, the essential nourishment for 26,000,000 Mexicans living in extreme poverty, leaped 10% a kilo throughout central Mexico.

Much like Obamaland, where the President crows about recovery in a jobless economy, Calderon pledged in a nationally-televised New Year’s message that 2010 will be a “year of recuperation” for Mexico although his predictions of 3% growth seems delusionally rosy — in 2009, the Gross National Product contracted 7% and growth was negative.

Unemployment, as measured by the government’s obfuscated system, is at a 15 year high of 6.8% — in the real world 6.8% translates to 40% of the work force not working, according to social economist Julio Boltvinik. 100,000 jobs are reportedly being lost each month (nearly 50,000 went down the tubes in October when Calderon fired the Luz y Fuerza workers.) But there is light at the end of the tunnel: according to the Wall Street Journal, a half million Mexican workers have found employment in the illicit drug industry.

The much-respected Economist Intelligence Unit’s yearly ratings of political instability take into account the socio-political dynamic in 165 countries. In 2010, Mexico places in the upper third of nations at risk of violent political upheaval. Whether this is an indicator of resurgent revolution here in 2010 is a story…

[During the next three months, John Ross will travel the U.S. from sea to stinking sea with his new cult classic El Monstruo: Dread and Redemption in Mexico City which the New York Post (!) recently recommended as a “gritty, pulsating” read. For suggested venues (particularly in the Chicago and St. Louis areas) write johnross@igc.org.]