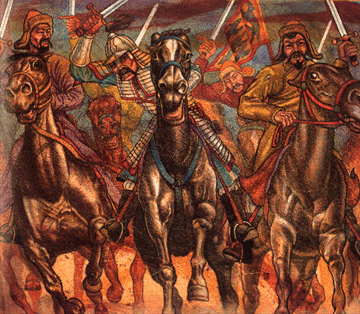 Republican assault on the truth:
A winning strategy for an off-year election

The Democrats appear to be clueless in the face of a relentless propaganda campaign that relies upon what were once psychological tools to be used against enemy populations.

Last weekend, the GOP attacked President Barack Obama as a poor leader in the war on terror. They have no information to support their claims, but the attack is well-planned, magnified by the media, and was almost unchallenged by the Democrats. So successful were the Republicans at ginning up outrage against President Obama that he had to go on television to bear full responsibility for the failure.

Initially, the Obama administration handled the Christmas bombing attempt above Detroit in a clueless manner, and this invited the concerted Republican attack.

This situation bears all the earmarks of the spin wars the Democrats lost hands down over health care and the economy.

Avuncular Former New Jersey Governor Thomas Kean led off saying Obama’s plate was too full and that he was distracted with things like health care when he should have been “focused” upon improving the operations of the Transportation Safety Administration. Kean is the same fellow who deftly presided over the 911 Commission coverup.

Kean’s comment on Obama being distracted from his anti-terrorism duties became the leading sound bite for the rest of the news cycle. But what proof is there that Obama has not been “focused” and spending time on terrorism? Absolutely none! If fact, Obama was attacking Al Qaeda bases in Kuwait a month before the Christmas plane bombing attempt occurred.

Then Senator Jim DeMint attacked the president for not doing enough about terrorism. This is the same man who voted against increasing funding for TSA and Homeland Security. He also put a hold on the nomination of Erroll Southers’s nomination to head TSA. Hence, De Mint is responsible for making TSA leaderless at this critical time. He blocked Southers because he wants a pledge that the TSA workers will not be allowed to join a union. One interviewer gently reminded the South Carolina extremist about his funding vote.

Democrats have said little about the “hold” and have not mentioned all the other holds on Obama’s judicial nominees. No one mentioned that the Republicans had seven years to fine tune the air safety mechanism, and Republican writer Katherine Parker moved to head off that line of reasoning by writing that it is all Obama’s problem and fault now.

A third line of attack was led by Dick Cheney, who is actually growing in popularity. Somehow he thinks that rhetoric wins battles with terrorism. Because Obama will not use the term “war on terrorism,” Cheney says Obama was soft on terrorism. The implication was that if Cheney were still VP he would have sniffed out the Detroit jockey shorts bomb plot just as he pulled together the dots on 9/11.

A few commentators actually showed clips in which Obama used the term ”war.” The issue, of course, is that the Islamic world equates “war on terrorism” with “war on Islam.” Every time the term was used, the terrorists got more recruits. Cheney and his ilk do not care about this; they have an arguing point and they are determined to defend the Bush legacy and defame Obama even if it is by helping Al Qaeda recruit more killers and suicide bombers.

Then, a few days later, Senator Jon Kyl said he feared for the nation’s safety while Janet Napolitano was Secretary of Homeland Security. John McCain stood at his side to add gravity to this pronuncimento. Somehow her misstatement after the event proved she was an inept administrator. Say it enough times and it makes perfect sense to the average bloke.

That evening CNN’s resident grouch Jack Cafferty invited viewers to answer whether she should be fired, and he received a flood of emotional rants, most of them were ad hominem in nature.

The Republicans are absolutely shameless, but also very effective. From January 20, 2009, on they focused on the 2010 off-year elections — an occasion when few vote. Their endless charges have heated up their base and converted many independents. In a few weeks, they convinced many that the Obama Administration was responsible for the near success of the Christmas underwear bombing at Newark. Obama had to shoulder all the blame himself.

There was a great deal of evidence that George W. Bush had plenty of warning about 9/11, but he was never required to bear any blame. There is a lesson here.

Most of us would agree that Republican policies under George W. Bush were neither successful nor good for ordinary folks. Yet, over the last12 months, the Gallup organization has found that the nation has moved to the right with a consistent 40% conservative, 36% moderate, and 21% liberal. Somehow, realities have not sunk in. Perception management has triumphed. Is it any wonder that, despite having a fairly good policy year, Obama’s “strongly approve” rating dropped from 43% to 26%

In 1981, Ronald Wilson Reagan began the practice of using psychological warfare techniques on or against the American people. At the time, this was called “public diplomacy.” Make no mistake about it, this amounts to pouring poison into the stream of democratic discourse.

He spent over $100 million doing this. Psychological warfare techniques were manipulations of information that targeted the populations of other countries. Typically, they were distortions of information to play upon people’s superstitions, ignorance, and fears. But Reagan directed these powerful tools against the American people to sell his illegal secret war in Central America. George W. Bush used the same tools and spent even more public money doing this.

Dr. Joseph Goebbels mastered the art of the Big Lie. Repeat it often enough and people will believe it. Since those dark days, cognitive science has made massive strides. The tools the Republicans now deploy make Goebbel’s artifices look like playthings; and today’s strategists match or exceed in skills those of the Nazi propagandist.

A key understanding is that most brain functions are dominated by emotions, not by logical reasoning. The trick is to reprogram people’s memories with what you want them to recall, doing it in a way that will engage their emotions. Once this is accomplished, they will believe what you want them to believe.

The GOP has learned this lesson as well as much about shaping collective mindsets. From the advertising world, they have come to excel at message control, with most of their people reading off the same page at the same time. They have so outdistanced the Democrats that cognitive scientists sometimes refer to their “cognitive Madisonianism.” The reference here is not to the great James Madison, who would deplore what they are doing to disrupt the marketplace of ideas and democracy itself. The reference is to the purveyors of illusions on Madison Avenue.

George Lakoff has written about how the Democrats must learn some of their lessons for the good of the Republic. Some think adopting these techniques damages our political process. But we are getting down to a choice between two evils. The lesser evil is a situation in which both parties use these unfair and dastardly tools. The greater evil is that one party ignores them while the party most attached to privilege, the corporate world, militarism, and right-wing populism excels in their use.

In addition to mastering cognitive science, the GOP strategists seem to understand more about political science than the Democrats. Many of us mistakenly think that independents are folks in the middle who carefully study and weigh issues. There are a few independents who are like that. But the vast majority of them are all over the spectrum, frequently changing postures.

They do not like politics, refuse to study issues, and are very impatient. These folks usually see things in simple terms and adhere to the conventional wisdom. Some studies show that they are a little more inclined to stereotypical thinking about Blacks than most Americans. It is likely that some of them sense at some level that the middle class is not likely to recover lost ground and need a target at which to vent their anger.

Realizing that, the GOP was easily able to quickly convince a majority of independents that Obama was responsible for our economic woes and that his health care plans were socialistic. Remember, thsee “independents” have short memories and are not at all analytical. Moreover, the independents will not blame the Republicans for obstructionism. They do not follow politics enough to recognize this.

It even appears that they have rewired their own memories and reversed long held convictions. Most in 2003 would never believe that the GOP would become the party that favors torture and denying enemies essential due process. When the first reports of torture broke in 2004, conservatives insisted that those who brought the news were lying liberals who hated America. In time, the vast majority of Republicans came to embrace torture. They are now enraged that KSM and the Christmas bomber will be sent to federal courts.

Their propaganda machine has been so effective that it has essentially wiped out decades of Republican commitment to civil liberties and human rights. Yes, a few like John McCain, have managed to straddle these questions, but the party has essentially abandoned a noble heritage.

The Democrats appear to be clueless in the face of a relentless propaganda campaign that relies upon what were once psychological tools to be used against enemy populations. If the Democrats think that, without a lot of help, the voters will see through the artful GOP propaganda campaigns, they are in for a rude awakening. Byron Dorgan of North Dakota and Chris Dodd have already headed toward the exit, and one southern Blue Dog has rushed to complete his transformation into a Republican.

Some very good scholars — two at Yale — have been worrying about what would happen if the present slow recovery evaporates, with unemployment getting worse and the prospects for the middle class looking even worse. Their fear is that there could be a lurch to the far left and even incidents of violence.

From what we know about the capabilities of Republican strategists; the opposite would occur. Indeed the masses could stampede into some kind of Tea Baggers’ Valhala, with a mild exclusionist movement that would result in the removal of many liberals from teaching, journalistic, and ecclesiastical positions and a rush toward prudent silence among Hollywood types and other entertainers. Look for more creationist literature in the book stalls at National Parks.