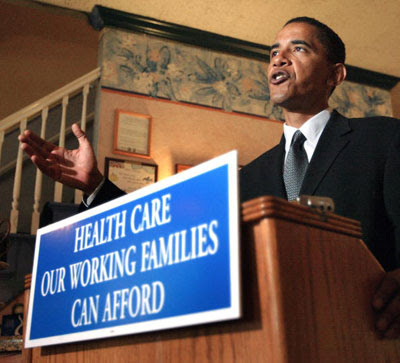 Perhaps too many liberals are exhausted by watching the Kabuki Theatre of the Republican congressional leadership and their total disregard for the welfare of the nation in this time of deep crisis.

On Tuesday March 3, the attendee list for the Health Care Summit at The White House was announced and I, like many, many other advocates of universal, single payer health care felt that President Obama had entered a Faustian agreement with AHIP. I, again, like many others spent hours on the internet attempting to rally support for our cause. Seemingly the effort bore results as Rep. Conyers and Dr. Fein, President of Physicians for a National Health Policy (PNHP) were included in the gathering. Dr. Fein’s speech is reproduced in my last Rag Blog submission.

It was the next morning that I found the extensive pamphlet issued during the Obama campaign wherein he described his plan for universal health care on page 34. Indeed, he did not include HR 676 in his thinking but a viable, and possibly enactable plan was described which we will touch on in more detail later.

Perhaps too many liberals are exhausted by watching the Kabuki Theatre of the Republican congressional leadership and their total disregard for the welfare of the nation in this time of deep crisis. Perhaps we are becoming a bit touchy as a result of their nay saying, and their opposition to increasing taxes for the wealthy, their placing blame for our economic woes on the working man, and their absurd argument that if the super-wealthy have to pay more taxes it will reduce their giving to charity, as if tax-deductions were the sole reason for charitable giving. However, back to the subject of health care in the after glow of the White House conference . . .

In our discussion of health care let us apply the dictum of Ockham’s razor to the discussion. First, the cost of universal health care has been bandied about with little thought to realities. If one goes to the PNHP website one can click on “Single Payer National Health Insurance” for a well presented summary. For extensive details go to the left column and click on “Frequently Asked Questions.” Second, the need for national health care becomes apparent when one reviews the “Human Development Index.” This was a totally new concept to me but one that is explained in Wikipedia. The Human Development Index (HDI) is a comparative measure of life expectancy, literacy, education and standards of living in countries worldwide. It is a standard means of measuring well-being, especially child welfare. The standing of the United States? Look it up!

Subsequent to the White House Conference Rep. John Conyers, speaking at Thomas Jefferson University, said that President Obama would not support single-payer universal health insurance now because he had too much on his plate — two wars and an economic crises — and would have to settle for the health reform he could get. The Michigan Democrat said the President would push through a public-private system of health reform, keeping private insurance through employers, and expanding a Medicare-like system for the uninsured, “if he is lucky.” This, of course, is compatible with the Obama campaign promise.

Even this concession has caused the AHIP (America’s Health Insurance Plans) to launch a vitriolic campaign, well detailed in an article in Campaign for America’s Future, by Monica Sanchez. These are the folks who feigned support for and then helped torpedo health care reform in the early 90s with the now infamous “Harry and Louise” ads. They have good reason to mount an opposition since the top seven “for profit” health insurers made a combined $12.6 billion in 2007 — an increase of 170.2% from 2003. Further, the CEO compensation packages for the top seven for profit health insurance companies ranged from $3.7 million to $25.8 million.

Business Week in the March 5, 2009, issue has a lengthy article entitled “A Backlash against Obama’s Budget.” It is noted that lobbyists are already planning public protests, ad campaigns and more targeted appeals to key members of Congress. On March 3, former Columbia/Hospital Corporation of America CEO Richard L. Scott, contributed $5 million from his own pocket, launched a $20 million advertising and public relations effort emphasizing free market alternatives to Obama’s health-care plans. Scott plans three weeks of ads on CNN and NBC, then video documentaries hosted by former CNN anchor Gene Randall in which doctors and patients in Britain and Canada bemoan their health systems.

If I were Mr. Scott I would go at this in two ways: (1) In every community, in every social group, there are, as we all know, folks who are chronically complaining, the tiring bitchers, that we all encounter. Surely, with the added incentive of several thousand dollars, they would be only too eager to vent their hostility in public; (2) And then there are unemployed professional actors, looking for work, who will be glad to oblige. One thing that I cannot comprehend is why Mr. Scott omitted Fox News from his selections. I vaguely remember legal fraud representations against Columbia Hospital Corporation some years ago.

Obama and his team will also be hearing from health insurers like United Health Group, Humana, Well-point and Kaiser. They are balking at the plan to cut $176 billion in costs out of Medicare Advantage which combines private insurance with Medicare coverage. The lobbyists aim to send a message to Max Baucus of Montana, the Democratic chairman of the Senate Finance Committee, and Charles Grassley of Iowa, the committee’s top Republican. The plan is to show how much rural areas would suffer under the proposal. “By rural areas,” we basically mean Iowa and Montana”, says one industry lobbyist. “Baucus and Grassley will understand that.”

Again, in our last Rag Blog article we dealt with the United Health Care Group, and have addressed Humana on repeated occasions. We also reported on Sen. Baucus’ repeated receipt of donations from the health insurance and pharmaceutical industries in prior presentations. Remember that President Bush established Medicare Advantage with several thoughts in mind: (1) to enrich the insurance industry; (2) to privatize Medicare as he failed to privatize Social Security and thus deplete the Medicare reserve funds per neoliberal economic theory; (3) and to reward his contributors in the insurance industry.

In The Guardian of March 7, 2009, there is a telling quotation from Senator Grassley; “Should the reform plan include a public-sector insurance programme (some call it ‘Medicare for All’) as an alternative to private insurance?” A lot of us feel that the public-sector option would create unfair competition “for the private insurers.”

David Sirota on March 6, in “Blog For Our Future” asks the question, “If government is so awful, so inefficient and so supposedly hated by the country as the Right so often insists, how are those same Republicans insisting that Americans would overwhelmingly opt to be covered by a government-run health plan, if given the choice.” Further, “Mitch McConnell suggested that there were areas in which Republicans won’t compromise, particularly the creation of a new public insurance program to compete with private insurers. ‘Forcing free market plans to compete with those government-run programs would create an unleveled playing field and inevitably doom the competition.’

Of course the playing field would not be level. At the present time the administrative cost consumes approximately 6% of the budget, while over 30% of the private plans go into administrative costs, which include CEO salaries, stock holder dividends and advertising. And remember as well, the private companies have a big expense in paying lobbyists and bribing our elected representatives.

The Republican thinking is well represented in The Raw Story on March 5, 2009. Republican Representative Zach Wamp of Tennessee told MSNBC that Obama’s proposed healthcare plans would be a “fast march to socialism” and that he believes that healthcare is not a right because many choose not to have insurance. Listen, healthcare is a privilege.” (Does he not know that a decent private plan for a family of four can cost $12,000?)

Obviously Rep. Wamp has not the vaguest ideas of what is inherent in “socialism” and is totally unfamiliar with the excellent privileged health care in the vast majority of Western European nations. One wonders if, as a child, the “gentleman” enjoyed teasing animals!

The March 16 issue of Time Magazine, hardly a liberal publication, presents, on page 26, an excellent article entitled “The Health Care Crisis Hits Home.” Near the end of the article the author points out that 25 million are UNDERINSURED. They pay for health care coverage but have inadequate coverage. There is no magic formula for figuring out how much coverage is enough, but here are a few pitfalls to avoid: (1) High Deductibles Commonwealth Fund found that 25% pay annual deductibles of $1,000 or more, a red flag for scant coverage. (2) Caps or omission of services. Read your plan to check on drug coverage or per day hospital fees, which may leave you with bulging health care bills. (3) Temporary or short-term policies. Buying into these plans may disqualify you from comprehensive, long term coverage later, especially if you have a pre-existing condition.

At the near age of 88, I would love to see single payer, universal health care enacted, and have worked for it as a member of PNHP; however, I am a realist and for the present will support the Obama plan, knowing that it is not perfect but feeling that it is a step in the right direction with better things to come. I must admit hesitancy in accepting the Obama Treasury team, and his apparent lack of historical perspective re: Afghanistan; however, he is taking many steps that rile the far right establishment and which I in turn find comforting. I remember quite well when President Kennedy was advocating withdrawal of troops from Viet Nam, a more tolerant attitude toward Cuba and an accelerated civil rights policy. Perhaps President Obama should stay within his armored limousine! One assumes that in our nation there are greater, and more malicious, forces than the Presidency.

2 Responses to Misplaced Anger : Coming to Terms with the Obama Health Care Plan