Monsters Up in Arms 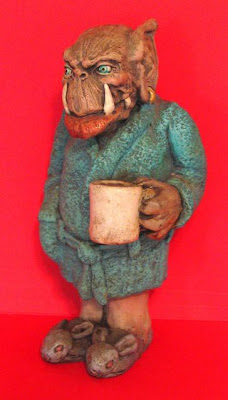 The gentleman pictured above has taken offense to characterization of Hillary as a monster.

An Obama campaign aide’s remarks in which she called Sen. Hillary Clinton (D-NY) a “monster” have ignited a firestorm of controversy among monsters across the U.S., prominent monsters confirmed today.

Calling Hillary Clinton a monster is “odious and offensive to monsters everywhere,” said Tracy Klujian, the executive director of the Monster Anti-Defamation League, a group that monitors unflattering portrayals of monsters and miscreants in the media.

“As monsters, we are subject to defamation and stereotyping on a daily basis,” Mr. Klujian said. “But being lumped together with Hillary Clinton is really a low blow.”

Mr. Klujian said that he was pleased that the Obama aide had resigned over the “monster” remark, but said that “more work will need to be done” if the Illinois senator is to mend fences with the monster community.

“We monsters count for as much as five percent of the vote in Pennsylvania,” Mr. Klujian said. “And that number is even higher in Pittsburgh.”

Perhaps in an effort to steer clear of the controversy, Sen. Clinton herself dodged the issue of whether or not Sen. Obama is a monster in an upcoming interview on 60 Minutes.

“He’s not a monster as far as I know,” she told Steve Kroft in an interview to air this Sunday. “I mean, I take him on the basis of what he says, and, you know, if he says he’s not a monster, there isn’t any reason to doubt that.”

Elsewhere, Rep. Ron Paul said that he is dropping out of the G.O.P. race, but would continue to run for president of Earth II.

[Andy Borowitz is a comedian and writer whose work appears in The New Yorker and The New York Times, and at his award-winning humor site, BorowitzReport.com.]

From Redthink / The Rag Blog