More on the Carnage in Iraq 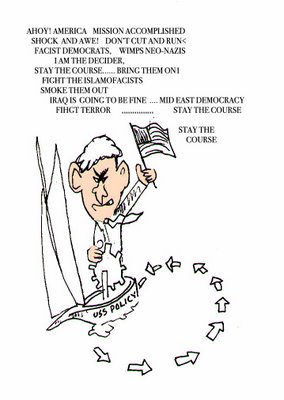 A Last Wild Ride on the Titanic: Bush Leading the Ship to Destruction
By Mike Whitney
Al-Jazeerah, October 13, 2006

Yesterday’s report in the Washington Post that over 650,000 Iraqis have died as a result of the US-led invasion is just the latest bit of bad news to hit the Bush administration. In fact, the buzzards have been circling the White House for some time now and they won’t be leaving anytime soon.

The “peer-reviewed” report from the John Hopkins School of Public Health followed all the standard procedures for producing a thoroughly credible survey. After interviewing nearly 2,000 Iraqi residents, checking death certificates and records at the morgue, they compiled their data and made their calculations. “The same survey methods were used to measure mortality during conflicts in the Congo, Kosovo, Sudan and other regions.”

The Bush administration has never challenged the organization’s findings before. In fact, they used the group’s reckoning on Sudan to accuse the Sudanese government of “genocide”. If that’s true, then Iraq must be “triple-genocide”; an entirely new nomenclature for the premeditated obliteration of the world’s oldest civilization.

Still, in the face of mounting pressure and widespread public unease, Bush has ordered a carrier group to the Gulf; steaming ahead for an apocalyptic confrontation with Iran. When the time is right, he’ll blow the whistle and the bombs will start pelting down like a Texas hailstorm.

Bush is chugging inexorably towards Tehran and we’re all being swept along in his wake. It’s like one last wild ride on the Titanic before we hit the ice in the open seas and slip slowly beneath the waves.