Hey, world, step right up: American weapons are available for (nearly) everyone. 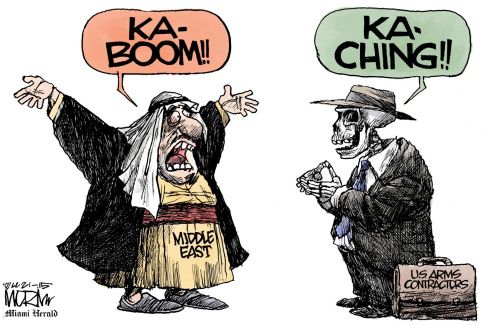 So who won the “war” about the Iran Agreement?

Millions were spent for a stream of ads on TV and radio and in major newspapers in the “war” over Obama’s nuclear deal with Iran. But one day while clicking through TV’s vacuous channels I picked up a local reporter visiting a Midwest diner asking diners what they thought of the Iran deal and was told they had never heard of it.

Back in the world, though, a bruising battle was on. Opponents were indifferent to the possibility of more war, which Obama said would result if the deal was rejected, meaning, I thought, so long as their kids didn’t have to fight. Supporters were branded Israel-haters and worse and several pro-deal Jewish Democrats were told they belonged in the ovens, the familiar consignment of adversaries to Auschwitz.

In my hometown of Great Neck, New York, with at least 26 synagogues and lots of Iranian and 0rthodox Jews, panicky local Democratic politicians, Jewish and non-Jewish, none of whom I presume ever read the huge, highly technical text of the agreement or had ever taken a public stand on foreign policy, quickly moved to oppose the deal as did many liberal Jewish politicians in areas inhabited with lots of Jews, most prominently Charles Schumer (when did he become Chuck?) even though several polls indicated America’s Jews were pro-deal.

When it seemed that the antis were going to lose, The New York Times claimed the Israel Lobby “Suffered a Stinging Defeat” and Newsweek added that the Iran nuclear pact “weakened AIPAC, Washington’s most powerful interest group,” two conclusions based on nothing more than wishful thinking. I say that because those two august publications have published little about how effectively AIPAC has mastered how to work Congress.

The battle over the Iran deal emphasized the growing gap between older and younger American Jews.

Closer to what happened was the realization that the unelected leaders of the Israel Lobby spoke only for themselves and that Bibi, as he claimed after the Paris killings, did not speak for world Jewry. What the Iran agreement battle did was emphasize the growing gap between older and younger American Jews, between those who believe Israel is Judaism — while overlooking its humane social ethic and prophetic vision of the just community — and that Israeli and America’s national interests are the same, dismissing those who favor negotiation and diplomacy rather than aligning themselves with confrontational conservatives and neocons willing to risk another Middle Eastern war.

For a clue I turned to a long-forgotten and treasured 1934 book, Merchants of Death, by H.C. Engelbrecht and F.C. Hanighen, the contents of which led me to crown the winner: The Merchants of Death who “sell the instruments with which humans are killed, gassed and maimed” and from which “they reap a tremendous profit … [in] a world which recognizes and expects war cannot get along without an enterprising, progressive. and up-to-date arms industry.”

The book portrayed the intimate relationship between the weapons business, banks, government, media, and the citizenry, an observation even more apt today, especially if we throw in our bought politicians. This existing connection helps nurture our endless conflicts and while occasionally revealed, especially by online crusaders, is barely noticed in the larger political world, let alone acted upon.

The Forward, one of the few independent American Jewish newspapers, was among the first to sense what was happening, asking, “Will American Weapons Flood Middle East after Iran Deal?”

Of course they will, even after 14 years of American wars in Iraq, Afghanistan, Yemen, Syria, and Libya, and with zillions spent to continue on forever, the blind leading the blind with failed quick fixes. But business is business and there’s tons of money to be made in the munitions game.

Meanwhile, in addition to the billion dollar deals that have already been consummated, as Nathan Guttman, The Forward’s Washington bureau chief and former Haaretz and Jerusalem Post correspondent, found. Now that the Iran Agreement is about to be history, he wrote, the next stage is “a new arms race fueled by U.S. efforts to reassure Israel and various Sunni countries that feel threatened by the Shi’ite Islamist government in Tehran.”

It’s a bit puzzling to Iranians, he added, one of whom asked at a New York briefing, “If the United States wants tranquility to prevail why is it adding to the arsenal there?”

New weapons are now being offered to all the regional actors, especially Israel.

New weapons are now being offered to all the regional actors, especially Israel, which is scheduled to receive more additions to its missile intercept system, more F35 fighter jets, bunker-busting bombs, and much much more.

If they get all that they want, U.S. aid to Israel, much of which is required by law since 2012, will only keep growing, the total approaching $6 billion for further missile defense and research and development, according to former New York Times Israel bureau chief David Shipler. Yet even with all these freebies, the U.S. has made no effort to use its influence and money to work out an arrangement restricting the spread of settlements or even seriously raising the issue of the plight of occupied Palestinians.

Drowning in money, the autocratic Gulf Sunni states will also receive more than they need, and one day ISIS and other assorted murderers and criminal gangs still unknown will have bought, stolen, or been gifted with some of these weapons, which led a former State Department official to tell Guttman: “What the Israelis are concerned about is regime change in Saudi Arabia” — or even the Gulf states fortified with advanced military systems — asking, “what would happen with all these weapons under a different regime?”

The super-rich Saudis are also in line to get anything they want, including an enormous $1 billion weapons contract to restock Saudi arsenals, whose weapons have shattered whatever is left of civic life in impoverished Yemen’s vicious, and to the American people, mass media and Washington’s think tank “experts,” incomprehensible civil war.

I know it’s a dumb question, but are there enough VIPs in the Imperial City and elsewhere who really care enough about unrestricted arms races and the wars they instigate?