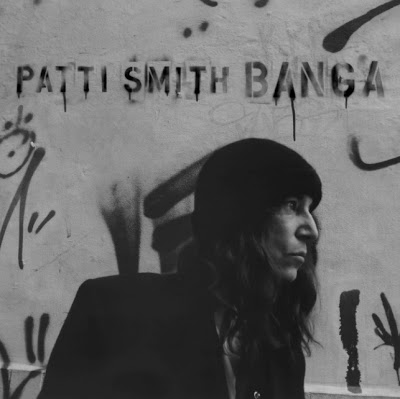 The wait is over:
Patti Smith’s ‘Banga‘

The title cut is a meditation on Pontius Pilate’s dog Banga in Mikhail Bulgakov’s satirical novel, The Master and Margarita.

Patti Smith fans’ eight-year wait is over — Banga is a bold return to the musical style and lyricism that made earlier Smith efforts praiseworthy.

Banga opens with the cinematic voyage of “Amerigo” (Vespucci, from whom America gets its name) to an Edenic new world. On this cut, the richness and delivery of Smith’s incantatory voice shines brightly. The pop charm of “April Fools” will have you humming to Patti’s vocals and tapping to Tom Verlaine’s guitar work. “Come, be my April fool, we’ll break all the rules.” Eat your heart out, Jimmy Iovine.

The title cut is a meditation on Pontius Pilate’s dog Banga in Mikhail Bulgakov’s satirical novel, The Master and Margarita. It speaks of canine loyalty. “Night is a mongrel — believe or explode,” Smith howls, as son Jackson provides the barking. However, “This is the Girl,” written for Amy Winehouse, scores with its girl group doo-wop a la the Shangri-Las. Perfect.

The 10-minute epic “Constantine’s Dream,” perhaps the best art-rock composition by an American artist this year, evokes the narratives of Horses and Easter. In its dream within a dream, Smith, like a howling St. Joan of Arc on a steed, calls out, “All is art — all is future!”

The world doesn’t end with a bang on Banga but with a haunting and unfettered version of Neil Young’s elegiac “After the Gold Rush.” A perfect touch to the most satisfying comeback album of the year.

[Gregg Barrios is a journalist, playwright, and poet living in San Antonio. Gregg, who wrote for The Rag in Sixties Austin, is on the board of directors of the National Book Critics Circle. His play I-DJ premieres in July at Overtime’s Gregg Barrios Theater in San Antonio. This review was first published at the San Antonio Current. Contact Gregg at gregg.barrios@gmail.com. Read more articles by Gregg Barrios on The Rag Blog.]