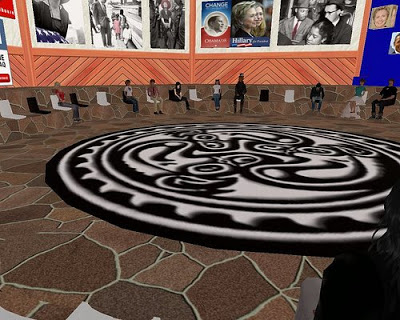 We expect to post live material from the conference in the coming days. The intrepid Thorne Dreyer is attending NetRoots Nation in Austin and will one day soon resurface to tell us what happened there. Please stay tuned …

Netroots Nation at the Crossroads: Move Over MoveOn
by Ronnie Cummins / July 18, 2008

“MoveOn is not a movement although it wants to be perceived as one. It is a brilliant and effective fundraising and marketing machine, but 95% or more of their so-called members ignore any particular email appeal. These 3.2 million people on the MoveOn email list are the object of marketing and fundraising campaigns, but they have absolutely no meaningful or democratic control over the decisions of organization, there is no accountability from the leadership to the MoveOn list members, and those of us on the list are unable to organize and communicate amongst ourselves within the list because it can’t be accessed by the grassroots at the local or state level. MoveOn, the Democracy Alliance, and the various liberal think tanks that have arisen to fight the Right are clearly a force able to raise millions of dollars for Democratic candidates and launch PR and messaging campaigns, but none of them are about empowering a populist grassroots uprising.”

The energy crisis and Peak Oil. Bank failures and economic recession. Climate chaos, crop failure, and unpredictable weather. The health crisis. The food and farming crisis. An endless, murderous, multi-trillion dollar war in Iraq and Afghanistan. The Patriot Act, Homeland Security, an evermore-powerful Shadow Government. An ongoing, pre-meditated assault on Constitutional liberties. An epidemic of social and psychological malaise, hopelessness, and ethical disorientation. Bought and stolen elections and an indentured mass media. Out-of-control politicians, corporations, and technology. Self-destructive hyper-consumerism and the Wal-Martization of the economy. Institutionalized robbery by a billionaire class oblivious to growing poverty and misery… Will we look back on 2008, as the year we tried to change drivers, but still couldn’t stop the car from going over the cliff?

Millions of Americans, especially the “netroots,” those drawing their information and inspiration from the open sources of the internet, are finally connecting the dots between the burning issues, moving beyond limited concerns to radical awareness. A politicized new majority is waking up to the fact that the proverbial “end” is near. We must move beyond “business as usual” and tepid reform. We must link together our burning issues, unite our heretofore-fragmented forces and communities into a qualitatively more powerful current, and press and confront the Fortune 500 and the nation’s thousands of elected public officials — before it’s too late. In these dangerous, careening times we have no choice but to grab the wheel from Democratic Party hacks and fake netroots and grassroots leaders, make a sharp radical turn, and accelerate along the path of grassroots and netroots resistance, from Main Street to Manhattan, from City Hall to the Capitol.

The crazed neo-con project for world domination, aided and abetted by profit-obsessed multinational corporations; countered feebly by the “loyal opposition” of centrist Democrats, single-issue public interest groups, and top-down “progressive” organizations like MoveOn, have brought us to the precipice. Radical crises demand radical remedies. The “road to the right” that the Democrats and Obama are taking is suicidal. Either we mobilize a revitalized Movement to take to the streets and the suites of the corporations and the politicians or we’re going over the cliff. Move over MoveOn. We will not sit by and watch our Netroots Nation devolve into a nation of sheep and lemmings.

A potentially world-changing segment of the body politic is finally waking up to the fact that single-issue politics and limited-focus organizing cannot address the current Crisis. Facing a generalized breakdown of the political and economic System and a rapid degradation of global life-support systems, it is obviously insane to keep repeating, “My issue and my organization or my blog is more important than yours,” or to wait for the Democratic Party and its latest middle of the road messiah, Barack Obama, to save us. Watering down our life-or-death concerns and urgency in the mistaken belief that we will attract the “silent majority,” is a dangerous illusion. The doomsday clock is ticking. The climate, food, health, political, economic, and energy crisis already impacting our lives, and the lives of everyone on the planet, will soon become catastrophic.

The multi-trillion dollar war for oil in the Middle East can no longer be separated from the energy crisis nor the climate crisis, nor the growing global food crisis, nor the erosion of Constitutional liberties, nor the lack of funding for health care, housing, jobs, education, clean energy, infrastructure repair, and public services. In order to avoid economic and climate meltdown, and to secure the funds to make our emerging green economy the economy, we must force the Democratic majority in Congress to use their Constitutional power of the purse to cut off all funds for the war, with or without the support of Nancy Pelosi and Barack Obama. “Live Wire” grassroots leaders in our movements for peace, justice, sustainability, health, and democracy must subordinate our tactical or secondary differences, reach out to the disenfranchised majority, connect the dots between the burning issues, and create a massive new netroots and grassroots synergy.

And lest we forget. We haven’t seen the last of the Bush Cheney gang. Before leaving office, evidence is mounting the maniacs in the White House are preparing to carry out two final maneuvers to derail democracy and advance their insane project for world domination: stealing the 2008 elections with voter suppression and electronic vote theft, and precipitating or fabricating a terror attack or other incident, and then attacking Iran.

What is to be done? Again my friend and fellow activist, John Stauber, hits the nail right on the head:

“If and when populist forces build an email list as big as MoveOn’s — and most of that list was built by MoveOn’s posturing as an ardent anti-war organization, which it is not — and harness it for real grassroots empowerment, that is when we might see some exciting political developments that combine the Netroots and grassroots for fundamental change. I’d love to see a MoveOn-type organization that would actually trust and empower the millions of people on its email list so that the decision making, organizing and money benefit the grassroots and grow power from there upward, one in which the structure at the top is accountable to and elected by the members. It’s hard to have a political democracy when we don’t even have democratic organizations or movements. I’ve talked with some of the leadership of MoveOn about this, but they have no intention to democratize and will remain a top-down marketing and fundraising organization.”

Here are five, immediate steps to head off catastrophe and to begin to build a radical populist alternative to MoveOn:

1. Move beyond single-issue politics and embrace a multi-issue, radical but practical, platform. You can read and comment on the 40-point Grassroots Netroots Alliance (GNA) platform and Candidate Survey at www.GrassrootsNetroots.org.

2. Join up and help GNA build up a multi-million email list, a netroots army of multi-issue progressives and radicals, who understand the need to transform the System and literally overthrow the dictatorship of corporations and indentured politicians. The Grassroots Netroots Alliance (with 200,000 people currently on our email list) is currently approaching a dozen or so large, like-minded networks with comparable lists to jump-start this process.

3. Press the politicians to take a clear stand on all the burning issues. You can send the GNA Candidate Survey to all of your elected officials and candidates for office — local, state, and federal — at www.GrassrootsNetroots.org.

4. As we “press the politicians,” we need to consciously and deliberately integrate electoral insurgency and netroots lobbying with non-electoral resistance — including boycotts, strikes, civil disobedience, and other pressure tactics. In the face of an unprecedented Crisis, we must move beyond polite protest to resistance.

5. Sign the Pledge of Resistance. We must prepare now to roll back the next aggressive moves by the Bush/Cheney gang: stealing the elections and attacking Iran. If you are willing to sign up to take collective action in your community in the weeks following another Republican theft of the elections on November 6, or in the event of an attack upon Iran, send an email to pledgeofresistance@grassrootsnetroots.org.

Ronnie Cummins is National Director of the Grassroots Netroots Alliance.

This entry was posted in RagBlog and tagged Democracy, Netroots Nation. Bookmark the permalink.