Next Nuke Nightmare? Paid for with Your Taxes 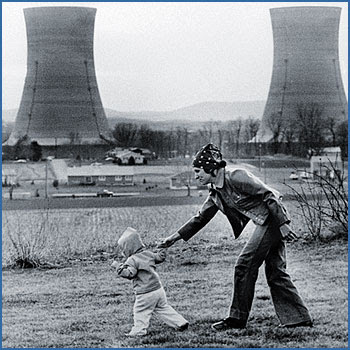 In 1979, roughly 25,000 people lived within five miles of the giant cooling towers at Three Mile Island that became symbols of the nation’s worst commercial nuclear accident. Photo by Martha Cooper / AP.
We are now paying
For the next Three Mile Island

Today this same class of executives demands untold taxpayer billions to build still more TMIs. No matter how many meltdowns they cause, and how much havoc they visit down on the public, they still believe they’re above the law.

Fueled with more than $600 million public relations slush money, they demand a risk-free “renaissance” financed by you and yours.

In 1980 I reported from central Pennsylvania on the dead and dying one year after. Dozens of interviews documented a horrifying range of radiation-related diseases including cancer, leukemia, birth defects, still births, malformations, sterility, heart attacks, strokes, emphysema, skin lesions, hair loss, a metallic taste and much more. As reported by the Baltimore News-American among others, such ailments also ripped through the animal population..

To this day no one knows how much radiation was released at the 1979 TMI accident, where it went, or whom it harmed. The official line that “no one was killed” is arguably the biggest lie ever told in U.S. industrial history. It is to public health what the promise of power “too cheap to meter” was to public finance.

It parallels Soviet lies about the 1986 catastrophe at Chernobyl, whose health effects continue to skyrocket. A devastating summary report issued by the New York Academy of Sciences (Yablokov, Nesterenko & Nesterenko: Chernobyl: Consequences of the Catastrophe for People & the Environment) says at least 980,000 people are likely to die from the fallout.

That would be a small fraction of the casualties had 9/11 terrorists dived into the two reactors at New York’s Indian Point instead of hitting the World Trade Center.

In a time of deep financial stress, it also counts that the TMI accident turned a $900 million asset into a $2 billion liability in a matter of minutes. Chernobyl has cost Belarus and Ukraine at least $500 billion and counting. And the price tag on a major meltdown anywhere in the U.S. is virtually beyond calculation.

Thus those who think a flood of new nukes will flow unimpeded into the American pocketbook haven’t been paying attention:

To this day the families of those harmed by radiation at Three Mile Island have been denied the right to make their case in federal court.

But now the shoe is on the other foot.

Desperate for cash, the nuclear industry wants us all to pay hundreds of billions for the joy of living downwind from still more Three Mile Islands for which they intend to assume NO liability.

They want our money AND our lives.

From central Pennsylvania after 31 years, the message is clear: Just Say NO!

[Harvey Wasserman’s Solartopia! is at www.harveywasserman.com, as is The Last Energy War. He is senior advisor to Greenpeace USA and the Nuclear Information and Resource Service.]

4 Responses to Next Nuke Nightmare? Paid for with Your Taxes