Nice is Not Enough : Obama and the Israeli Political Mess 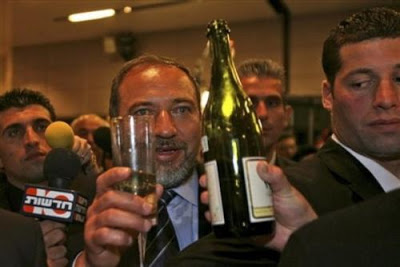 Obama, as shrewd a gentleman as he is supposed to be, is in no way prepared to handle the weird mix of arrogance and insult originating from Netanyahu and Lieberman and flooding the Israeli media.

Universally respected, even loved in many quarters, and still the embodiment of hope for many of the simple folk and the downtrodden, Barack Obama is not doing very well with the new government of Israel. Obama sounds well intentioned when he talks of peace in the area. But Obama, as shrewd a gentleman as he is supposed to be, is in no way prepared to handle the weird mix of arrogance and insult originating from Netanyahu and Lieberman and flooding the Israeli media.

The Minister of Foreign Affairs, Avigdor Lieberman, ignores the hints by many of the pundits that he may be embarrassing his boss, Bibi Netanyahu. Thriving on media attention, Lieberman keeps up a barrage of inanities like his statement in an interview to a Russian publication to the effect that “the US will do what we tell it to do.” Despite his appearance as a thug and a buffoon, Lieberman has a broad geo-political agenda and even presumes to explain to Obama that Pakistan and Afghanistan and not Iran are the chief problem.

Lieberman is working on his very own contribution to world security by pushing the idea of a USA-Russia alliance against the Islamic world (civilization) to be brokered by…you guessed it…Israel and its foreign minister. There are people out there who take the clash of civilizations seriously. Just what we need – a Judeo-Christian alliance for the preservation of Western values.

Lieberman is no genius but he can pick up on a racist strain in US-European thinking. Bibi is a bit more elegant, but he is following the very same scenario as his buddy. This policy must be characterized as the right wing-extremist line of the more aggressive and adventurous elements in the US administration. These forces dislike Obama’s “moderate” style even when it is seen purely as a matter of form. They know the hard facts of imperial power and will exploit every element to wear down Obama, who has hitherto been simply unable to elaborate a coherent alternative to traditional hegemonic thinking.

Israel sees itself a pioneer in the war of civilizations. From its forward position it looks back at Obama and reminds him that, in the light of the conceptual continuity of US foreign policy, respect and consideration are due to the pioneers watching the fort.

Obama and the U.S. are in a particularly sensitive situation in the ME. Netanyahu has effectively scuttled the peace process, as faint and unconvincing as it was. Iran is exerting greater influence in the ME where the moderate Arab regimes are reduced to depending on Israel muscle to protect themselves from the fall out resulting from their collaborationist betrayal of the Palestinians.

Odds and increasing signs on the ground indicate that the departure and the redeployment of US troops will have a destabilizing effect in Iraq. There are increasing signs that the present leadership in Baghdad might take a hike to Teheran. The US leadership has figured out it needs some secular horses in the Iraqi race and is busy trying to resurrect Sadaam Hussein’s old party. You see, this is the Middle East.

Meanwhile, for the last few weeks, Bibi Netanyahu has been working overtime to kill off any chance whatsoever for any solution to the Israeli-Palestinian and the Israeli-Arab conflict. He has already demonstrated clearly and unequivocally that, when and if he deigns to be so kind to his US buddy as to agree to go back to the negotiating table, he will talk only exclusively to a waterboarded Palestinian delegation that will kiss the whip after being thoroughly inundated by a flood of new unconditional demands.

The plain fact of the matter is that while Obama’s advisers’ limit him to bland generalities such as “Let’s have two states,” and “Everybody should behave well,” Lieberman and Netanyahu are hard at work. They are ostensibly reviewing their policy options, but really making sure that by issuing a slew of new demands, one more outrageous than the other, there will not be a Palestinian in sight who will dare to sit down to discuss “Two-states.”

Some wise guy pundit here called this new list of demands, Netanyahu’s shopping list for Obama. Obama has scheduled a full and frank discussion with Netanyahu for the 18th this month. Hillary Clinton is looking forward to hear about new developments in Israeli policy and hopes to explain to Netanyahu the danger of alienating the moderate Arab regimes. But Netanyahu is smart enough to exploit any opening given him in D.C. to present a new agenda of unlimited complications. Obama and Clinton may want to play dumb but if they allow Netanyahu to participate in shaping the agenda, they are selling the Palestinian down the river…again.

Netanyahu is not without friends and connections in D.C. within the present administration which is still in the grips of the political ideas and anti-Iran hysteria of its predecessor.

Making War for Peace or Making Peace for War

Everybody watching Bibi here knows how he is preparing himself for the coming meeting with Obama. The war on terror he says trumps peacemaking in the region. With Ahmadinajad on the loose, how could you conceivably talk to us about concessions affecting our vital rights. First lets take out Iran and then I will have time and patience to talk with you about Palestine. The hawkish, militarist, chauvinist boss here is telling Obama, no peace with Palestine without war on Iran.

Hillary Clinton was unable to understand that she was trailing far behind the discussion when she suggested that Netanyahu should desist from alienating the moderate Arab by making peace with the Palestinians. Despite the rumors that Lieberman is spitting in the soup, the Israeli-Egyptian love fest is on again. The Israeli government and the head of Egyptian intelligence, meet personally on a regular basis to work out the details of the siege and isolation of Gaza.

When he has a chance, Bibi will explain to Hillary Clinton that he has the moderate Arab regimes in the palms of his hands. The moderates fear, more than anything else, political confrontation with Arabs and Muslims who have their very own ideas as to the disposition of their own oil. They, the “moderates”, are simply too busy defending their own privileges to be bothered by the fate of Palestine.

Even so, Obama and Hillary will tell Netanyahu that progress in the Palestinian talks is absolutely necessary to isolate Iran either for heavy sanctions or eventually a full sale attack. We must have peace they will explain before we can make war. Netanyahu, if it appears that he cannot really get his war (with Iran) for promising peace (with the Palestinians) will make the “ultimate concession” and agree to renew talks with the Palestinians.

Obama will fake a victory, the “moderate” Arab countries will marvel at US diplomatic and the US will proceed on its mission to Teheran. The US will ostensibly have moved in the direction of dialogue but will brandish the Israeli sword in the face of the recalcitrant Iranians to keep them up to speed. With all this jockeying hither and thither very few bright people will be fooled into forgetting the name of the game.

This region is oil country and it is the United States and it alone which wants it hands on the spigot. Iran with its reactionary regime and crude and clumsy leadership has the weird idea that it should decide how to dispose of its own oil, a crime punishable by death and invasion in the US playbook.

I wish to avoid the full scale debate on the significance of the Obama presidency. Suffice it to say that even the most enthusiastic of Obama’s admirers on the left understand that he is the man responsible for tending store for the US empire and its interests. He himself has chosen to surround himself especially in foreign affairs by circles that represent continuity while he must rely on a state apparatus which honors the “virtues” of continuity above all else.

Meanwhile, the US is in full retreat in the Middle East, where Iran and its allies enjoy a spurt of prestige for their support for the forsaken Palestinians. And now South Asia is falling apart. It is worth believing that the nuclear warehouse in Pakistan is in safe hands, but nothing else is safe and no where else is the area secure. Iraq is evermore inherently unstable, and the latest news is that the US is trying to resurrect Saadam Hussein’s party in order to balance the Shi’ite predilection for friendship in Teheran.

Unless it is ready to radically increase its military activity, directly or by proxy, in these regions, the US must come up with a serious shift in policy and the cosmetic stuff is just not enough. In short, the US must demonstrate a serious willingness to recognize Iran’s legitimate interests and get rid of the “axis of evil” baggage.

And now back to Bibi and his plans for war. As long as the hard line Israeli policy and the softer line US policy are supposed to advance the same goal of thwarting and obstructing Iranian influence, as long as Washington buys the Israeli propaganda that Israel is in danger of a new Auschwitz and Ahmadinajad is a new Hitler (like Nasser and Arafat figured in previous Israeli narratives), there is a danger that Israel will attack. Equivocation in DC can easily translate to Israeli provocation in Boshir.

Our condemnation of the US-Israeli alliance in the ME does not mean that we have any sympathy whatsoever for the reactionary Islamic Republic and its leadership. Ahmadinajad seems totally unable to understand that his sloppy loose and crude formulations regarding Jewry and Israel are just what Bibi and Lieberman ordered. However, recent experience has shown that US intervention, direct or sponsored, will only strengthen a vicious regime, while spreading untold death and destruction among the people of Iran.

[Reuven Kaminer, was born in Detroit, Michigan in 1929, and he emigrated to Israel in 1951. He is a writer, political analyst, and veteran activist of the Left in Israel. His blog can be found here.]