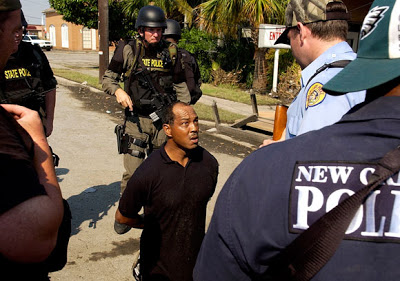 Lance Madison is surrounded by State Police and NOPD SWAT members on Sept. 4, 2005, after violence erupted on the Danziger Bridge in New Orleans. Madison was accused of shooting at police and was arrested, but he was later released. Madison’s brother, Ronald, was fatally shot on the bridge. Photo by Alex Brandon / Times-Picayune.
Activists say problem goes deeper:
Cops charged in post-Katrina killings

NEW ORLEANS — This week, federal officials charged six current and former New Orleans police officers in connection with the killing of civilians in the days after Hurricane Katrina. The six are not only accused of murder but also of conspiring to hide their crime through secret meetings, planting evidence, inventing witnesses, false arrests, and perjury. Four of the officers may face the death penalty.

While the details of their charges are shocking, much of the media has missed the real story: corruption and violence are endemic to the NOPD, and wider systemic change is needed not just in police personnel, but in the city’s overall criminal justice system.

In the days after the flooding of New Orleans, police officers were told they were defending a city under siege and were given tacit permission to use deadly force at their own discretion. At the time, no one in power seemed to be interested in looking into the details of who was killed and why.

For more than three years, these post-Katrina murders were ignored by the city’s District Attorney, the Republican U.S. Attorney, and even the local media. But in late 2008 ProPublica and The Nation published the results of an 18-month investigation by journalist A.C. Thompson. Under new leadership, the Department of Justice began its own inquiries soon after Thompson’s report.

FBI agents reconstructed crime scenes, interviewed witnesses and seized officers’ computers. Disturbing revelations have continued to unfold since then, as the mounting evidence against them has forced a growing number of cops to confess.

Among the most shocking cases:

On September 2, four days after Katrina made landfall, Henry Glover was shot by one officer, then apparently taken hostage by other officers who either killed him directly or burned him alive. His charred remains were found weeks later.

Also on September 2, Danny Brumfield Sr., a 45 year old man stranded with his family at the New Orleans Convention Center, was deliberately hit by a patrol car, then shot in the back by police in front of scores of witnesses as he tried to wave down the officers to ask for help.

On September 4, 2005, on New Orleans’ Danziger Bridge, a group of police officers drove up to several unarmed civilians who were fleeing their flooded homes and opened fire. Two people were killed, including a mentally challenged man named Ronald Madison, and four were seriously injured. Madison was shot in the back by officer Robert Faulcon, and officer Kenneth Bowen then rushed up and kicked and stomped on him, apparently until he was dead.

Faulcon and Bowen were among those charged this week in a 27-count indictment that lays out the disturbing chain of events on the bridge.

The post-Katrina killings have also led investigators into further inquiries. The feds have already announced that they are looking into at least eight cases, including incidents that occurred in the summer before Katrina and in the years after. And as high-ranking officers confess to manufacturing evidence, their confessions bring doubt to scores of other cases they have worked on.

A coalition of criminal justice activists called Community United for Change (CUC) has asked for federal investigations of dozens of other police murders committed over the past three decades, which advocates say have never been properly examined. Activists named a wide range of cases, from the death of 25-year-old Jenard Thomas, who was shot by police in front of his father on March 24, 2005; to Sherry Singleton, shot by police in 1980 while she was naked in a bathtub, in front of her four year old child.

Several parents and other family members of victims of police violence have joined in protests and community forums sponsored by CUC. The parents of Adolph Grimes III, who was shot 14 times by cops on New Year’s day in 2009, are among those who have spoken out. “We want those officers incarcerated, so they can live with it like we live with it,” said Grimes’ father.

“This represents a real opportunity to raise some fundamental questions about the nature of police and what they do,” said Malcolm Suber, project director with the New Orleans chapter of the American Friends Service Committee and one of the organizers who formed Community United for Change.

Civil rights attorney Tracie Washington has been among those leading the call for federal intervention in the department. “It is time for the U.S. government, through the Justice Department’s Office of Civil Rights, to step in and step up,” she said. “We need a solution that addresses the systemic nature of the problem.”

Justice Department officials have indicated that they agree on the need for federal assistance. “Criminal prosecutions alone, I have learned, are not enough to change the culture of a police department,” said Assistant Attorney General Thomas Perez.

Mayor Mitch Landrieu has also said he agrees on the need for federal supervision. In a letter to Attorney General Holder, Landrieu wrote, “It is clear that nothing short of a complete transformation is necessary and essential to ensure safety for the citizens of New Orleans.”

However, many activists fear that Mayor Landrieu is speaking out in support of reform so he can maintain a level of control over the changes dictated by the feds. They are critical of Landrieu’s choices so far, such as his selection of NOPD veteran Ronal Serpas for the job of police chief, and have expressed concern that he will not break with the department’s troubled history.

“This is lukewarm reform,” says Rosana Cruz, the associate director of V.O.T.E., an organization that seeks to build power and civic engagement for formerly incarcerated people. “This is reaching the lowest possible bar that we could possibly set.”

While some form of federal supervision of the department seems likely, Malcolm Suber doesn’t think federal oversight is enough.

“I don’t think that we can call on a government that murders people all over the world every day to come and supervise a local police department,” He says. For Suber, federal control will not offer the wider, more systemic changes needed in other aspects of the system. While Suber wants more federal investigations of police murders, he wants these investigations to go hand in hand with community oversight and control of the department.

While activists may disagree on the role they see for the federal government, one thing Washington, Suber, and Cruz agree on is that the problem runs deeper than police department corruption. They say any solution needs to reach beyond the department to other facets of the system like the city’s elected coroner, the District Attorney’s office, the U.S. Attorney and the city’s Independent Police Monitor, who many see as limited by not having the ability to perform its own investigations.

“We have a coroner who always finds police were justified,” said Suber, referring to Frank Minyard, an 80-year-old jazz trumpeter who is trained as a gynecologist. Minyard has been city coroner since 1974, and has been the frequent subject of complaints from activists, who contend that he has mislabeled police killings. “We’ve had independent coroners, forensic doctors come after him,” said Suber, “And we found that basically all of his finding were bogus. Just made up.”

Henry Glover, last seen in the custody of police then found burned to death in a car, was not flagged by the coroner’s office as a potential homicide. In another case now under federal investigation, witnesses say police beat Raymond Robair to death. The coroner ruled that he “fell down or was pushed.” This “fall” broke four ribs and caused massive internal injury, including a ruptured spleen.

“If you ask any attorneys who have handled cases of police killings,” continued Suber, “When they have hired independent doctors to go after our coroner, nine times out of ten he’s wrong.”

Activists also complain that the city’s District Attorney Leon Cannizzaro has been slow to pursue cases of police violence. “The district attorney just does not file charges,” Suber said. “When it’s involving police, he finds no crimes committed.” Republican U.S. Attorney Jim Letten has also failed, Suber added. “A number of community groups have gone and met with him, asked him to investigate and he didn’t do anything.”

Organizers have put forward a range of proposals for the reforms they would like to see, including institutional support for community-led programs like CopWatch, the incorporation of a system for language interpretation, and a more powerful Independent Police Monitor. But they all agree that not just the department, but the entire system needs fundamental change, and that change needs to come from outside of city government. “How you gonna get the wolf to watch over the chicken coop?” asks Adolph Grimes, Jr. “It’s the system itself that is corrupted.”

[Jordan Flaherty is a journalist, an editor of Left Turn Magazine, and a staffer with the Louisiana Justice Institute. He was the first writer to bring the story of the Jena Six to a national audience, and his award-winning reporting from the Gulf Coast has been featured in a range of outlets including the New York Times, Mother Jones, and Argentina’s Clarin newspaper. He has produced news segments for Al-Jazeera, TeleSur, and Democracy Now!. Haymarket Books has just released his new book, FLOODLINES: Community and Resistance from Katrina to the Jena Six. He can be reached at neworleans@leftturn.org. An earlier version of this article appeared on colorlines.com.]