Not Polite Lobbying But a Return to the Streets 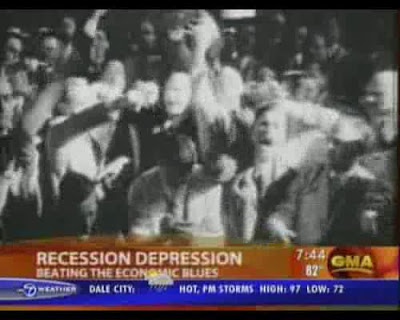 But with Wall Street rescued by government intervention, there’s never been a better time to argue for collectivist solutions

Whatever the events of this week mean, nobody should believe the overblown claims that the market crisis signals the death of “free market” ideology. Free market ideology has always been a servant to the interests of capital, and its presence ebbs and flows depending on its usefulness to those interests.

During boom times, it’s profitable to preach laissez faire, because an absentee government allows speculative bubbles to inflate. When those bubbles burst, the ideology becomes a hindrance, and it goes dormant while big government rides to the rescue. But rest assured: the ideology will come roaring back when the bailouts are done. The massive debts the public is accumulating to bail out the speculators will then become part of a global budget crisis that will be the rationalisation for deep cuts to social programmes, and for a renewed push to privatise what is left of the public sector. We will also be told that our hopes for a green future are, sadly, too costly.

What we don’t know is how the public will respond. Consider that in North America, everybody under the age of 40 grew up being told that the government can’t intervene to improve our lives, that government is the problem not the solution, that laissez faire was the only option. Now, we are suddenly seeing an extremely activist, intensely interventionist government, seemingly willing to do whatever it takes to save investors from themselves.

This spectacle necessarily raises the question: if the state can intervene to save corporations that took reckless risks in the housing markets, why can’t it intervene to prevent millions of Americans from imminent foreclosure? By the same token, if $85bn can be made instantly available to buy the insurance giant AIG, why is single-payer health care – which would protect Americans from the predatory practices of health-care insurance companies – seemingly such an unattainable dream? And if ever more corporations need taxpayer funds to stay afloat, why can’t taxpayers make demands in return – like caps on executive pay, and a guarantee against more job losses?

Now that it’s clear that governments can indeed act in times of crises, it will become much harder for them to plead powerlessness in the future. Another potential shift has to do with market hopes for future privatisations. For years, the global investment banks have been lobbying politicians for two new markets: one that would come from privatising public pensions and the other that would come from a new wave of privatised or partially privatised roads, bridges and water systems. Both of these dreams have just become much harder to sell: Americans are in no mood to trust more of their individual and collective assets to the reckless gamblers on Wall Street, especially because it seems more than likely that taxpayers will have to pay to buy back their own assets when the next bubble bursts.

With the World Trade Organisation talks off the rails, this crisis could also be a catalyst for a radically alternative approach to regulating world markets and financial systems. Already, we are seeing a move towards “food sovereignty” in the developing world, rather than leaving access to food to the whims of commodity traders. The time may finally have come for ideas like taxing trading, which would slow speculative investment, as well as other global capital controls.

And now that nationalisation is not a dirty word, the oil and gas companies should watch out: someone needs to pay for the shift to a greener future, and it makes most sense for the bulk of the funds to come from the highly profitable sector that is most responsible for our climate crisis. It certainly makes more sense than creating another dangerous bubble in carbon trading.

But the crisis we are seeing calls for even deeper changes than that. The reason these junk loans were allowed to proliferate was not just because the regulators didn’t understand the risk. It is because we have an economic system that measures our collective health based exclusively on GDP growth. So long as the junk loans were fuelling economic growth, our governments actively supported them. So what is really being called into question by the crisis is the unquestioned commitment to growth at all costs. Where this crisis should lead us is to a radically different way for our societies to measure health and progress.

None of this, however, will happen without huge public pressure placed on politicians in this key period. And not polite lobbying but a return to the streets and the kind of direct action that ushered in the New Deal in the 1930s. Without it, there will be superficial changes and a return, as quickly as possible, to business as usual.

This entry was posted in RagBlog and tagged Economic Collapse, Global Economy. Bookmark the permalink.