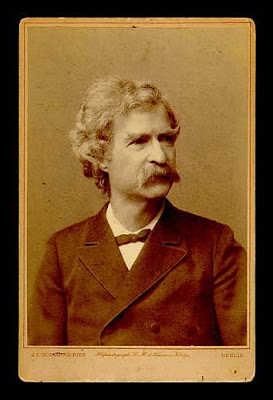 During my days in college at Virginia Beach I learned quite early that one should beware of certain American writers such as Twain, Upton Sinclair, and John dos Pasos, who were in favor of anarchists and did not have the interests of America at heart.

My name is Joseph Clemens and I am not kin to Samuel, who was otherwise known as Mark Twain. My mother assured me that we were not related, since Sam, as he got older, developed queer ideas, some even saying that he was an atheist. During my days in college at Virginia Beach I learned quite early that one should beware of certain American writers such as Twain, Upton Sinclair, and John dos Pasos, who were in favor of anarchists and did not have the interests of America at heart.

In any event, as I look into the mirror shaving for my breakfast appointment with the gentleman from the U.S. Chamber of Commerce, I cannot get the wonderful gathering of last evening out of my mind. I should realize, as a senior adviser to a Democratic United States Senator, that one is blessed with certain privileges; however, last evening and this morning are indeed mind boggling. It was a humdinger of a party and I am eternally grateful to my boss, who is a committee chair whose responsibilities include health care, for including me in the function.

The entire ball room of the Mayflower was taken up by the several hundred folks feted by the AARP. The same AARP that was instrumental in providing our seniors with that excellent legislation incorporated in Medicare Part D prescription plans. Though few of the Democrats from the House or Senate were included, we by and large felt at home with our numerous Republican colleagues. The cocktail hour was excellent, although I limit myself to two mint-juleps. The problem was that darned journalist I encountered at the bar. I cannot recall whether he was from Madison or Austin, but he was surely out of place dressed in a turtleneck and corduroys. Even worse, he kept talking of unacceptable writers such as Will Rogers, H.L.Mencken, and I.F.Stone, all communist toadies at one time or other as I recall.

In any event, I was able to shake the chap and spent the remainder of the evening enjoying the main speaker, Richard Scott, who founded the American Hospital Corporation. He, and his adjunct speakers, made a point of indicating that we in the United States have the best medical care in the world, unlike those socialist countries in Europe that provide free medical care for all. Huh! Somehow, the stupid Europeans just do not get it. Medicine, like banking and the stock market, should be controlled by the free market. Ronald Reagan made a point of that. One just does not appreciate medical care unless one pays for it oneself. So, what if a few folks die from lack of care. They, in all probability, are poor or are illegal immigrants and will not be missed by proper folks in any event. The evening ended with all of us standing at attention singing God Bless America.

But time to move on and get dressed. Breakfast at the Hay Adams demands that I wear my pin stripe Brooks Brothers suit, with, of course, the American flag pin in my lapel. My boss asked me to carry along my brown briefcase and enclose in it yesterday’s Washington Post. He also had pre-ordered me a limousine to pick me up at my Connecticut Avenue apartment building. That gentleman thinks of everything especially when the Senate is working on health care, a subject dear to his heart. He was even considerate enough yesterday to organize a breakfast for Americas’s Health Insurance Plans, The Business Round Table, Blue Cross and Blue Shield and the Heritage Foundation. It is because of his thoughtfulness that he is helped out in his campaigns by many of these fine civic organizations. A true American, as are another half dozen Senators and quite a few Democrats in The House, unkindly called “blue dogs.”

I am always happy to dine at the Hay Adams and have the opportunity to look over Lafayette Park at The White House. At the moment I have mixed feelings looking at the White House. Odd, to have a dark complected foreigner living there. He has such peculiar ideas: equal pay for women, the discontinuation of enhanced interrogation which the liberals call “torture,” the closure of our fine detention facility at Guantanamo Bay, educational opportunities for pre-school children, treating foreign governments with respect. Frightening, for as Rush points out, “it is not the American Way.” Perhaps with the excellent efforts of The NRA and thinking folks at Colorado Springs we can inculcate our legislators with some decency.

Yet, there are certain factors I find frightening, such as a group of 15,000 nutty doctors, called Physicians For A National Health Program, obviously duped by the commies, who feel that health care is a right and a privilege for all Americans. I am glad to hear that they get little attention on Capital Hill. Added to this there is a Catholic Hospital in Erie, Pennsylvania, which is broadening its base for health care for the indigent and dispossessed. We all know that most of these folks are drug addicts or those too lazy to look for a job. I cannot imagine what motivates folks like this.

Here we are at The Hay Adams and my limousine driver tells me that he will wait. Strange, but there seems to be a bulge under his left arm. Probably his shirt does not fit or his coat is badly tailored. Had to await the head waiter and noted a lone man sitting at a table inside the door reading the Wilson Quarterly — probably one of those liberal professors from Georgetown or American University. Another group that needs the attention of patriotic thinking Americans.

At last seated with the gentleman from the Chamber of Commerce who sits his black brief case next to mine under the table. He had pre-ordered breakfast, which was first rate. We had an engaging conversation about the wonderful days under President Bush, who he tells me is to make his first speech in the United States since leaving office on June 17, in Erie, Pennsylvania. The Manufacturers Association there is raising $150,000 to be able to enjoy Mr. Bash’s company for the evening and to listen to his engaging words of wisdom. The Chamber anticipates flag waving, cheering crowds along the route from the airport to the convention center. It is great to be an American!

We also had a chance to discuss the fact that the present administration has crazy ideas about energy production, plans that will reduce income to the oil companies and antagonize our Saudi friends. He, like I, is concerned that we won’t thoroughly whip the Islamic fascists in Iraq and Afghanistan and establish a true Pax Americana. Much to be done; however, we agree that the initial problem is keeping health care in the devoted hands of the insurance industry it belongs.

I thanked my friend for the excellent breakfast and found my driver waiting. I instructed him to take me back to the Senate Office Building and it was only on the drive back that I noted I now had a black briefcase — considerably heavier than my brown one that my companion had accidentally picked up from under the table. I tried to open this one; however, it is locked. Best ask my boss, the Senator, what to do about it.

This entry was posted in Rag Bloggers and tagged Conservatives, Political Satire. Bookmark the permalink.