MEDIA / Where Were the Watchdogs on Iraq and the Economy? 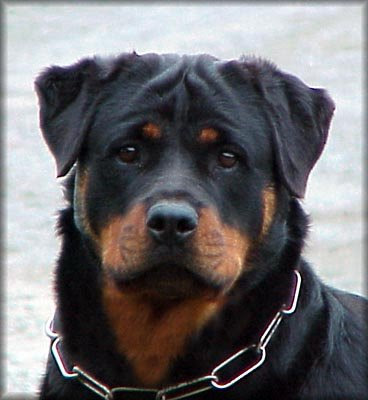 Were the watchdogs asleep on the job? Photo of Rottie ( “Who me?”) from Dog Infopedia.
When the Watchdogs Are Asleep, We All Get Robbed

In the wake of the financial collapse, I wonder if the remaining (if relatively low) public respect for the press is gone for good. Yes, the delivery platform of the future will change, but the content still has to be credible. And now it must be said: The media blew both of the major catastrophes of our time.

NEW YORK — Sometimes, pieces that may not really fit come together in revealing ways, especially nowadays, thanks to immediate distribution and then saturation via the Web. It happened again recently.

Unlike previous polls, this one showed that it wasn’t just Democrats and the under-30 crowd who feel this way (actually, more Republicans endorsed this view). After recent press performance, who could blame them? Especially since Stewart seemed to reveal more guts and passion — and even skill — than nearly anyone else in the “real” media in destroying Jim Cramer and some of his blowhard CNBC brethren for their cheerleading role in the financial collapse.

A few days after that, Ben Stein, a friend of Cramer’s, in his regular Sunday column for The New York Times, hailed Stewart for “calling us all to account.” Why wasn’t he praising the Times itself or any other member of the mainstream news media?

But it goes way beyond that.

No one is a bigger booster of newspapers than I, going back to my first job in journalism as a summer reporter four decades ago. I have long defended newspapers from charges of political “bias” and championed their coverage, and credibility, over that found in any other media.

But in the wake of the financial collapse, I wonder if the remaining (if relatively low) public respect for the press is gone for good. Yes, the delivery platform of the future will change — the Kindle, iPhone apps or rubbery plastic may replace paper everywhere — but the content still has to be credible. And now it must be said: The media blew both of the major catastrophes of our time.

I speak, of course, of the Iraq war and the financial meltdown. I wrote a book about the first, calling it “So Wrong for So Long.” I could write a sequel on the second disaster, and maybe title it “So Wrong Again.”

True, there’s more of a consensus around the Iraq failure. The press has circled the wagons on the latest flop, and I agree that individual reporters at certain papers did some fine watchdog work, to no avail. But the defenders of the press in this matter are cherry-picking the good stuff, much like Bush with his intelligence on Iraqi WMDs.

Others admit the press failed but could not have possibly understood how bad things were at the banks and on Wall Street. “No one knew” and “we’re only as good as our sources” or “they lied to us” are the common excuses. That sounds exactly like the media defending its Iraq miscues.

Many point to the terrific press coverage of the financial meltdown since September. Agreed, but again, the media also played great catch-up on Iraq — when it was too late.

And to say that some did probe deeply — well, I concur, just as some did on Saddam and WMDs. And, as in that case, the reports were often buried in the paper or the broadcast, or just sat there quietly waiting for follow-up or editorial comment. The watchdogs barked, but often off in the distance, and then went on their way. Why else was the Jon Stewart rant taken as such a breath of fresh air?

History will be the judge, although I suspect the first books that prove my case will appear any month now. But it doesn’t matter what I or other commentators charge. It’s what the news consumer thinks. And there’s no way that most of them, fairly or unfairly, have not already thought: Damn media. Why didn’t they warn us of these financial shenanigans in time?

The media miss stories all the time, always have, always will, and there’s nothing to be ashamed about in that — you can only do so much, especially in a time of slashed newsroom staffs. But to miss a story of this enormity, with consequences that will echo (like Iraq) for decades, only adds weight to the warnings of doom for the “old” media.

[Greg Mitchell is editor of Editor & Publisher. His latest book is Why Obama Won.]

This entry was posted in RagBlog and tagged Financial Crisis, Iraq War, Media Review, The Press. Bookmark the permalink.

1 Response to MEDIA / Where Were the Watchdogs on Iraq and the Economy?