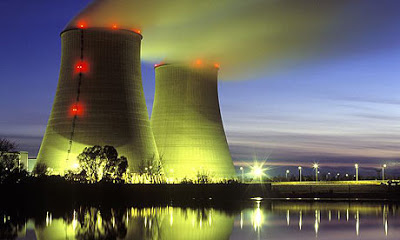 Image from Follow the Money.
Trials of the nuclear ‘renaissance’:
Will Obama guarantee a new reactor war?

Amidst utter chaos in the atomic reactor industry, Team Obama is poised to vastly expand a bitterly contested loan guarantee program that may cost far more than expected, both financially and politically.

The long-stalled, much-hyped “Renaissance” in atomic power has failed to find private financing. New construction projects are opposed for financial reasons by fiscal conservatives such as the Heritage Foundation and National Taxpayers Union, and by a national grassroots safe energy campaign that has already beaten such loan guarantees three times.

New reactor designs are being challenged by regulators in both the U.S. and Europe. Key projects, new and old, are engulfed in political/financial uproar in Florida, Texas, Maryland, Vermont, New Jersey and elsewhere.

And 53 years after the opening of the first commercial reactor at Shippingport, Pennsylvania, Department of Energy Secretary Steven Chu is now convening a “Blue Ribbon” commission on managing radioactive waste, for which the industry still has no solution. Though stacked with reactor advocates, the commission may certify the death certificate for Nevada’s failed Yucca Mountain dump.

In 2005 George W. Bush’s energy bill embraced appropriations for an $18.5 billion loan guarantee program, which the Obama administration now may want to triple. But the DOE has been unable to minister to a chaotic industry in no shape to proceed with new reactor construction. As many as five government agencies are negotiating over interest rates, accountability, capital sourcing, scoring, potential default and accident liability, design flaws, and other fiscal, procedural and regulatory issues, any or all of which could wind up in the courts.

In 2007, a national grassroots uprising helped kill a proposed addition of $50 billion in guarantees, then beat them twice again.

When Obama endorsed “safe, clean nuclear power plants” and “clean coal” in this year’s State of the Union, more than 10,000 MoveOn.org members slammed that as the worst moment of the speech.

The first designated recipient of the residual Bush guarantees may be at the Vogtle site in Waynesboro, Georgia, where two reactors now operate. Georgia regulators have ruled that consumers must pay for two proposed new reactors even as they are being built.

But initial estimates of $2-3 billion per unit have soared to $8 billion and more, even long before construction begins. Standardized designs have not been certified. On-going technical challenges remind potential investors that the first generation of reactors cost an average of more than double their original estimates.

The Westinghouse AP-1000 model, currently slated for Vogtle — and for another site in South Carolina — has become an unwanted front runner.

Owned by Japan’s Toshiba, Westinghouse has been warned by the Nuclear Regulatory Commission of serious design problems relating to hurricanes, tornadoes, and earthquakes.

The issues are not abstract. Florida’s Turkey Point plant took a direct hit from Hurricane Andrew in 1991, sustaining more than $100 million in damage while dangerously losing off-site communication and power, desperately relying on what Mary Olson of NIRS terms “shaky back-up power.” Ohio’s Perry reactor was damaged by a 1986 earthquake that knocked out surrounding roads and bridges. A state commission later warned that evacuation under such conditions could be impossible.

Long considered a loyal industry lapdog, the NRC’s willingness to send Westinghouse back to the drawing board indicates the AP-1000’s problems are serious. That they could be expensive and time-consuming to correct means the Vogtle project may prove a losing choice for the first loan guarantees.

South Texas is also high among candidates for loan money. But San Antonio, a primary partner in a two-reactor project there, has been rocked by political fallout from soaring cost estimates. As the San Antonio city council recently prepared to approve financing, it learned the price had jumped by $4 billion, to a staggering $17-18 billion. Angry debate over who-knew-what-when has led to the possibility that the city could pull out altogether.

In Florida, four reactors have been put on hold by a plummeting economy and the shifting political aims of Governor Charlie Crist. Crist originally supported two reactors proposed by Florida Power & Light to be built at Turkey Point, south of Miami, and two more proposed near Tampa by Progress Energy. State regulators voted to allow the utilities to charge ratepayers before construction began, or even a license was approved.

But Crist is now running for the U.S. Senate, and has distanced himself from the increasingly unpopular utilities. With votes from two new appointees, the Public Service Commission has nixed more than $1 billion in rate hikes. The utilities have in turn suspended preliminary reactor construction (though they say they will continue to pursue licenses).

At Calvert Cliffs, Maryland, financially tortured Constellation Energy has committed to the French AREVA’s European Power Reactor, now under serious challenge by regulators in France, Finland, and Great Britain. An EPR under construction in Finland is now at least three years behind schedule, and more than $3 billion over budget.

Meanwhile, at Entergy’s 30-year-old Yankee reactor in Vermont, a series of radiation and information leaks has severely damaged prospects for re-licensing. The decision will soon be made by a deeply divided state legislature. “It would be better for the industry to let Vermont Yankee die a quiet death in the Green Mountain state,” says Deb Katz of the grassroots Citizens Awareness Network. “With radioactive leaks, lies and systemic mismanagement, Entergy is no poster child for a new generation of nukes.”

Meanwhile, New Jersey may require operators of the aging Oyster Creek reactor to install sizable towers to protect what’s left of the severely damaged Barnegat Bay, which the plant uses for cooling. Though the requirement may not be enforced for as much as seven years, the towers’ high cost could prompt a shut-down of the relatively small plant.

This unending stream of technical, financial and political downfalls could doom the “reactor renaissance” to history’s radioactive dump heap. “President Obama needs to remember what Candidate Obama promised: no more taxpayer subsidies for nuclear power,” said Michael Mariotte, executive director of the Nuclear Information and Resource Service. “Renewables and energy efficiency provide both greater carbon emissions reductions and more jobs per dollar spent than nuclear. Unlike nuclear power, they are relatively quick to install, and are actually safe and clean.”

Indeed, despite Congressional and White House support for these latest proposed loan guarantees, the grassroots fight over both old and new nukes grows fiercer by the day.

In the long run, this alleged “nuclear renaissance” could prove to be little more than a rhetorical relapse.

[Harvey Wasserman’s Solartopia! Our Green-Powered Earth is at www.harveywasserman.com, along with his History of the United States. He is Senior Advisor to Greenpeace USA and the Nuclear Information & Resource Service, and Senior Editor of www.freepress.org, where this article also appears.]

2 Responses to Nuke Industry Chaos : Obama and the Reactor Wars