Numbers of Homeless Iraq and Afghanistan Vets Are Growing 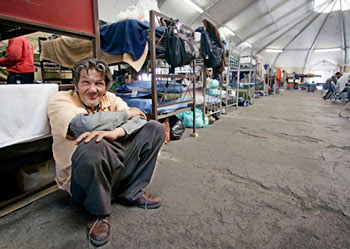 According to the Department of Veterans Affairs, there are about 195,000 homeless veterans on any given night. Photo: AP/World Wide Photos.
Iraq and Afghanistan war veterans join the homeless
By Anna Sussman / November 11, 2008

Ethan Kreutzer joined the Army at the age of 17 and fought with the 19th Airborne in Jalalabad, Afghanistan. When he retuned home, he had no money, no education and no civilian job experience. He soon became homeless. He slept in an alley off Haight Street, behind two trash cans.

June Moss drove from Kuwait to Iraq as an Army engineer in a truck convoy. When she returned to the United States, she lost her home, and drove her two young children from hotel to hotel across Northern California.

Sean McKeen, a hardy, broad-shouldered 21-year-old with a wide smile, went to Iraq to clear land mines, and to get money for college. When he returned home, he became homeless in less than a week. He found himself sleeping in a cot in a crowded homeless shelter in San Francisco.

They are all part of a growing trend of homelessness among returning war on terrorism veterans.

More than 2,000 military personnel return home to California each month. Most have no specialized job experience, education or an easy familiarity with civilian life. And many have post traumatic stress disorder (PTSD), making it difficult to get along with friends and family, and almost impossible to hold down a job.

“You feel like the whole world is against you when you get home,” said Kreutzer. “I was sleeping on the sidewalk, whereas I had been wearing a uniform less than a year before.” Soft- spoken and restless, Kreutzer was recruited in a 7-Eleven while still in high school. After five months in Afghanistan, he had a mental breakdown, diagnosed as PTSD. When he returned to the United States, he spent almost four years living on the streets.

Kreutzer now lives in a temporary housing facility for veterans on Treasure Island, run by the group Swords to Plowshares. He attends PTSD counseling with other war on terrorism veterans so that he can learn to maintain a job and house. “I was haunted by a lot of issues, a lot of things that I saw over there that were not good things. There are some times when I can wake up in a room and think I’m still there. I still remember what it tastes like, the air over there. I see all the rocks, I see the people,” said Kreutzer.

One of the symptoms of PTSD is isolation and withdrawal, according to Amy Fairweather, director of the Iraq Veterans project at Swords to Plowshares. “So that interferes with your ability to get a job. People sit in the dark by themselves,” she said.

Fairweather is seeing large numbers of homeless war on terrorism veterans come through her doors.

“Homelessness can happen very quickly, if they don’t get the help they need. Their mental health will get worse, they will become more depressed,” she said. “We are seeing Iraq and Afghanistan veterans, who are homeless, coming in very quickly. After Vietnam, it generally took about five to 10 years to end up on the streets. We’re seeing people on the streets three months after they come home.”

Moss spent 12 years with the military and had purchased a house with a VA home loan, but she fell behind on payments.

“When I got back from Iraq, I knew something was wrong,” she said. Diagnosed with PTSD, she found herself awake at night devising ways to keep her family safe. “I decided to move the refrigerator in front of the door to bunker us in,” she said. “Then I would stay up all night baking cookies because I didn’t want to go to sleep. Eventually, I stopped leaving the house altogether.”

Moss lost her job and her income, and the bank foreclosed on her home.

She moved her two kids between temporary housing units and hotels until her PTSD was under control. Now, she has a temporary house for her family, and a full-time job at the VA. “It’s because of my kids that I go to therapy and take my medication. If it wasn’t for them, I don’t know what would happen,” she said.

Other veterans are not so lucky. McKeen was exposed to more than 300 bomb blasts in Iraq. He suffers from traumatic brain injury as well as PTSD. When he returned home, he slept on couches at friends’ houses, and in his car while looking for a job. He spent many nights wandering the streets before he ended up in a shelter.

“It’s like a culture shock returning home, but you are supposed to be used to it,” he said. “Unless you are in war, nobody can understand what it’s like. And they expect you to just function normally by yourself after that?”

The Department of Veterans Affairs estimates about 2,000 war on terrorism veterans have become homeless upon returning to the United States. It’s still a small number, when compared to the staggering numbers of homeless Vietnam War-era veterans, but one that could balloon in the coming months.

At the Palo Alto VA, the inpatient programs for PTSD and TBI are crowded with war on terrorism veterans – an indication that a large number are at risk for homelessness, according to director of homeless programs Keith Harris.

“Before it gets to the point where someone is living on the street, what they are typically doing is struggling with a mental health disorder, burning their bridges with the people around them, family, employers, spouses,” he said. ” I don’t believe there is a large chunk of returnees literally homeless without a roof over their heads, but I think a large chunk of them are at risk for it.”

The homeless shelter at the Palo Alto VA is full. And many veterans still complain that the VA is unprepared and overly bureaucratic. Most have to wait six to eight months for claims to be addressed.

But by all accounts, the VA is far better prepared this time than it ever has been in the past. With an understanding that the looming homeless crisis is best treated as a mental health issue, it has hired 17,000 mental health workers, making it the largest mental health program in the country.

But with some 2 million active service members still fighting and undergoing the trauma of war, Moss wonders if any amount of preparation by the VA can address the fundamental problem of readjustment.

Anna Sussman is a journalist who has reported from the United States, Africa and Asia. To comment, e-mail forum@sfchronicle.com.