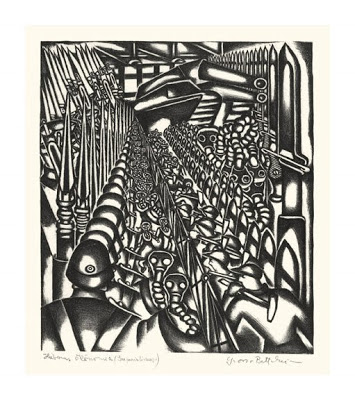 Imperialism (War Economy), by Jolan Gross Bettelheim, lithograph, c.1940.
Obama on Afghanistan:
He cannot believe what he is saying

After a 1966 presentation by Dean Rusk before the Senate Foreign Relations Committee, Senator Clifford Case of New Jersey commented about the Secretary of State that he could not have believed what he had just said about Vietnam. I thought of Case’s comments the other day after hearing that President Obama was going to announce the sending of 30,000 more troops to Afghanistan with a cost of $40 billion.

The President is a smart man. He knows that the demonic image of Al Qaeda as a worldwide threat to the United States is about as accurate as the old story about the threat of international communism during the Cold War. He has to know that the Taliban and Al Qaeda have their own separate agendas. He has to understand that the Taliban have been motivated by two concerns: corrupt local government and foreign occupation of their country.

Further, he has got to know that these foreign forces cannot subdue or defeat the Taliban in their own country because the population prefers them to the foreigners who are killing civilians and destroying what survives of their desperately poor country.

The President knows that his predecessor gained worldwide condemnation for ignoring the traditional international relations tool of diplomacy. He has to see that countries in the region and those that share common cultures, languages, and religions are more likely to be able to defuse conflicts than the Christian superpower from North America.

Yes indeed, the President is a smart man. He knows that military spokespersons have always proposed exaggerated battle plans guaranteeing such favorable results as defeating indigenous enemies and strengthening friendly governments while enhancing the security of the United States. And most of all, Obama has to know what the Vietnam War did to the United States.

If he knows all these things why is the president going to expand U.S. military operations in Afghanistan? The answer to the question has its roots in the formation of the permanent war economy. The PWE was constructed during World War II as government, the corporate sector, and the military mobilized to defeat fascist armies in Europe and Asia. While others demobilized after the war (or were forced to do so), the United States launched a several trillion dollar program to build the largest war machine in world history.

As economist Ismael Hossein-zadeh reported, military spending has been the second largest item in the federal budget behind social security, which is really a self-financed fund. Quoting from William Hartung, U.S. military spending in 2008 was greater than the rest of the world combined and 30 times greater than all State Department operations. Military programs constituted over 50 percent of all discretionary spending.

Pollin and Garret-Peltier added that military spending rose from three percent to 4.3 percent of the GDP during the Bush years. In 2008, military spending in excess of $600 billion created approximately five million jobs, both military and defense industry related. As Seymour Melman documented years ago, military spending meant funding a huge bureaucracy, contracts for the defense industry, and sub-contracts for manufacturers that produce goods that find their way into weapons systems. Nowadays spending includes private armies, security forces, civilian contracted services for the military, homeland security programs, large grants to major research universities, and many more activities funded and related to military missions.

Of course, military spending is never justified in narrow institutional terms but rather in terms of grand projects and campaigns; fighting communism, combating terrorism, or checking drug smuggling. These campaigns are presented as almost timeless. For example, Tom Hayden has alerted us to the doctrine of the “long war” quoting a counter-insurgency strategist who in 2004 wrote that “there is a growing realization that the most likely conflicts of the next 50 years will be irregular warfare in an ‘Arc of Instability’ that encompasses much of the greater Middle East and parts of Africa and Central and South Asia.”

These campaigns are reinforced by the general proposition embedded in our political culture that there always has been war and there will always be war. Generals and media pundits from time to time comment on the need for this or that weapon system “for the next war.” The scourge of war will always be with us.

Threats to the primacy of the permanent war economy

Debate about military missions today comes in the context of deep economic crisis and growing demands for scarce societal resources. Banks had to be bailed out. One in eight Americans are on food stamps. Health care needs to be reformed. Millions of people need jobs. Logic would suggest cutting back on military spending particularly since Pollin and Garrett-Peltier have shown once again that each billion in government expenditures for education would create almost three times more jobs than military spending. In fact, government investment in every civilian activity generates more jobs than investment in the military.

The newly released Economic Policy Institute “American Jobs Plan” includes a proposal for a $40 billion per year allocation of government funds to create one million public service jobs. The cost of this aspect of the EPI jobs program could be paid for with funds that will be going to expanding the war in Afghanistan instead.

So when we ask ourselves why military operations in Afghanistan will be expanded the answer seems clear. First, the military constitutes the largest organized, armed, and funded institution in American society. In today’s political economy it stands shoulder to shoulder with Wall Street as a source of almost unstoppable resistance to change. Second, military largesse trickles down throughout the society affecting manufacturing, scientific research, education, private armies, spy operations, and myriad other activities.

Third, Pentagon elites see the danger of this new administration reallocating spending to meet the needs of a crisis-ridden economy: health care, jobs, education, and transportation (it is interesting to note that Senators Lugar and Graham already have called for shelving health care reform until the battle in Afghanistan has been won). Finally, military institutional interests demanding increasing shares of government money use in their advocacy for expanding wars playing upon the deeply embedded war-proneness of American culture.

What are the consequences of this analysis for peace? One conclusion is that grassroots activists must take on the permanent war economy. It has been an enduring feature of American foreign and domestic policy since the end of World War II. The wastefulness of military spending, the folly of claims made justifying each and every war, and the war culture must be challenged. In addition, peace and justice movements must show clearly that every dollar that is allocated for the military is a dollar that is not used to sustain life, create jobs, promote education, and provide for health care.

6 Responses to Obama and Afghanistan : The Permanent War Economy