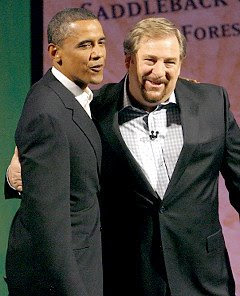 Rev. Rick Warren with President-elect Obama. Warren’s reactionary views on gays, abortion and other social issues have made his pick highly controversial. Photo by Buck / EPA. 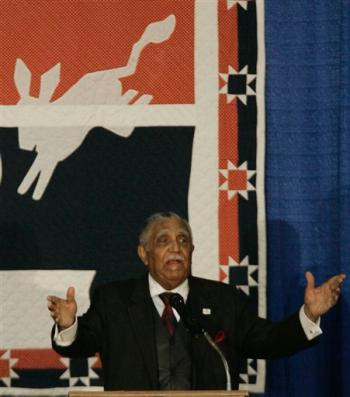 ‘In a news conference Thursday, Obama said he is a “fierce advocate for equality for gay and lesbian Americans.” But he said he will build relationships with people of opposing views, and wants his inaugural to reflect that goal.’

The clergy chosen by President-elect Barack Obama to pray at his inauguration fill separate symbolic roles: One is a nod to the civil rights activists who made Obama’s election possible. The other is an overture to conservative Christians who rankles some Obama supporters.

The Rev. Rick Warren, who will give the invocation, is the most influential pastor in the United States, and a choice that has already caused problems for Obama.

Warren is a Southern Baptist who holds traditional religious beliefs and endorsed California’s Proposition 8, which banned gay marriage. But he also wants to broaden the evangelical agenda to include fighting global warming, poverty and AIDS.

The Rev. Joseph Lowery, 87, is considered the dean of the civil rights movement. For the benediction at the Jan. 20 swearing-in, he says he will pray that the “spirit of fellowship and oneness” at the inauguration endures throughout Obama’s presidency.

“He gets a lot with these choices,” said David Domke, author of “The God Strategy: How Religion Became a Political Weapon in America.”

“Here’s a guy who wants to run a progressive administration getting a substantial lift in his wings from the nation’s most popular evangelical,” Domke said. “But he balances that with Joseph Lowery, who speaks to the more liberal, social justice and African-American heritage.”

By picking Warren, Obama is sending another signal, about his willingness to upset liberals by tilting to the center. Gay rights groups are demanding that Obama rescind the invitation because of Warren’s opposition to same-sex marriage.

“By inviting Rick Warren to your inauguration, you have tarnished the view that gay, lesbian, bisexual and transgender Americans have a place at your table,” said Joe Solmonese, president of the Human Rights Campaign, in a letter to the incoming president.

In a news conference Thursday, Obama said he is a “fierce advocate for equality for gay and lesbian Americans.” But he said he will build relationships with people of opposing views, and wants his inaugural to reflect that goal.

“That dialogue, I think, is part of what my campaign’s been all about: That we’re not going to agree on every single issue, but what we have to do is to be able to create an atmosphere when we — where we can disagree without being disagreeable and then focus on those things that we hold in common as Americans,” he said.

In the past several decades, inaugural prayer has most often been the job of evangelist Billy Graham, who forged relationships with every president from Dwight Eisenhower to George W. Bush. Dubbed “America’s pastor,” Graham is now 90 and off the public stage.

His son, Franklin, stepped in for his father and gave the invocation at Bush’s 2001 swearing-in. Bush’s personal pastor, the Rev. Kirbyjon Caldwell, an African-American Methodist from Houston, was chosen to give the inaugural benediction twice. Caldwell supported Bush in both his presidential campaigns, then backed Obama in 2008.

But Obama no longer has a personal minister. He resigned his membership at Trinity United Church of Christ in Chicago following an uproar over incendiary parts of sermons by his longtime pastor, the Rev. Jeremiah Wright.

Obama instead turned to two preachers who could set a tone for his administration.

“I’m overwhelmed. I’m very grateful. I’m humbled and honored,” Lowery said in a phone interview. “When we worked on the Voting Rights Act in the ’60s, we hoped and felt that one day there would be an African-American president. I honestly can say I didn’t think I’d live long enough to see it.”

Lowery’s biography reads like a history of the civil rights movement.

As a young pastor in 1950s Alabama, he helped lead the Montgomery bus boycotts. With the Rev. Martin Luther King Jr. and others, Lowery created the Southern Christian Leadership Conference, which anchored the national civil rights movement. In 1965, Lowery played a key role in the bloody, pivotal Selma-Montgomery March. He led a delegation of marchers presenting their demands to then-segregationist Alabama Gov. George Wallace.

Lowery, a Methodist, expanded his agenda in later years to fight poverty, stop violence and end apartheid. In 2006, he drew criticism — and a standing ovation — at Coretta Scott King’s funeral by condemning the Iraq war and poverty in the U.S. as Bush looked on.

Warren, 54, has become the most prominent clergyman of his generation.

His Saddleback Community Church in Orange County, Calif., has grown to more than 22,000 worshippers each week. His book, “The Purpose Driven Life” is one of the best-selling books in the world, with more than 30 million copies sold. He is mobilizing churches around the globe to fight poverty and illiteracy through his P.E.A.C.E coalition.

Last month, he joined forces with Reader’s Digest Association Inc., to launch a multimedia juggernaut based on his “Purpose Driven” writing. He and his wife, Kay, have become leading advocates for people with HIV/AIDS. On Dec. 1, World AIDS Day, the Warrens gave Bush an award for creating a multimillion-dollar U.S. fund to combat the virus.

With Warren, “Obama shows he is willing to work with a new breed of evangelical and kind of move beyond the tired figures associated with the religious right,” said Randall Balmer, a Barnard College professor of religious history and author of “God in the White House.”

In August, before the party conventions, Warren hosted Obama and Republican presidential nominee John McCain at Saddleback, quizzing them separately on issues ranging from personal failures to Supreme Court justices. Obama’s campaign had done extensive religious outreach. But he hurt his appeal to churchgoing voters when Warren asked when a baby gets human rights. Obama said it was “above his pay grade” to answer “with specificity.”

Still, Obama and Warren, who does not make political endorsements, are friendly, and the two men pray together. Warren will not comment on his role in the inauguration, a spokeswoman said.

“It’s nice to see a conservative evangelical pastor play such a prominent role in such an important event,” said Tom Minnery, a senior vice president at Focus on the Family, which has fiercely criticized Obama over his support for abortion rights and other issues. “I think what it does is it underscores the importance of evangelicalism in the country.”