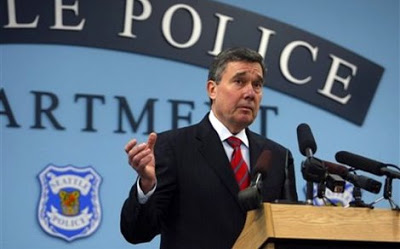 Here’s the good, the bad, and the ugly regarding Seattle police chief Gil Kerlikowske’s nomination to become the Obama administration’s new “Drug Czar.”

First, the good: Kerlikowske is about as good a pick as can be imagined for a federal job whose very conception–promotion of the deeply flawed “War on Drugs”–is problematic. Unlike his SPD predecessor, Norm Stamper, who has since gone on to become one of the country’s leading law enforcement critics of the War on Drugs, Kerlikowske is no abolitionist. But in his decade on the job in Seattle he has overseen some remarkably progressive drug policies.

Kerlikowske has championed “drug court” and other reforms that have diverted nonviolent drug offenders out of the justice system and, when appropriate, into treatment. That approach recognizes drug abuse as a public health problem, not a law enforcement one, and has not only helped improve thousands of lives, but saved them from being wrecked by our pointlessly punitive drug laws. Unlike City Attorney Tom Carr, Kerlikowske did not campaign against I-75, the voter-sponsored initiative that made marijuana possession SPD’s lowest enforcement priority; and, when I-75 overwhelmingly passed, he honored it. And Hempfest, the nation’s largest annual pro-pot festival, has evolved in the last decade from being at perpetual war with SPD to having cops and toking festival-goers freely mingle.

It’s hard to imagine a more tolerant attitude filling the federal office that, under both Dubya and his predecessors, routinely pumped out ludicrously hysterical anti-drug propaganda and persecuted states that tried to question the War on Drugs’ rationale or tactics. The irony, of course, is that those federal efforts only undermined any chance of dealing constructively with the very real societal problems that drug abuse poses. Rather than scaring kids straight, it encouraged them to blow off the dangers–of both the drugs and, far more often, the drug laws that have filled the country’s jails with nonviolent offenders.

A fresh approach couldn’t come sooner–and with Kerlikowske, Obama has picked someone with both local federal law enforcement background, and someone who’s no wild-eyed radical–someone, in other words, with both the credentials and the chops to make a shift in priorities happen. He is a fine choice.

That’s the good. However, Kerlikowske’s overall record running SPD is more mixed; and, in gushing over his pick and his tenure, local pols and media have been happy to overlook the bad. Most notably, Kerlikowske was ferociously resistant to meaningful civilian oversight of SPD, and was involved in a number of incidents where his discipline of misbehaving officers amounted to little more than a slap on the wrist. Between that tendency and a number of shootings of unarmed civilians (often non-white), especially earlier in his reign, Kerlikowske’s SPD has not had a good or trusting relationship with many in Seattle’s minority communities. In recent years the force has also been short-staffed at times, leaving SPD to defund community policing and to simply push drug and prostitution problems from neighborhood to neighborhood rather than having any real impact.

But that is little compared to the truly ugly: After eight years on the job, mayor Greg Nickels will now get to pick his own police chief.

What do we know about Nickels’ priorities? As I mentioned last issue, it can pretty much be summed up in the phrase “class war”: gentrification good, poor and downtrodden bad. Given that much of what a modern urban police force does is dealing with the folks who’ve fallen through our society’s frayed safety net, therein lies a lot of potential for a problematic pick. Nickels’ wars on the homeless, on nightclubs that cater to the “wrong” people, and on local neighborhood concerns will be that much worse if he picks a new chief that will be an enthusiastic enforcer of his priorities. For the last 15 or more years–even through the “civility law” era of former city attorney Mark Sidran–SPD has always been run by a chief that mostly steered clear of political posturing. That could change. Tellingly, Nickels’ current budget included massive cuts for Kerlikowske’s highly successful drug diversion programs. It would be naive not to expect a mayor who politicizes everything (much like our recently departed President) not to demand that a new pick for chief hew to his class-war priorities.

Moreover, Nickels’ pick will need to be confirmed by city council. Unlike, say, two years ago, when Nick Licata headed the public safety committee, the lead councilman for law enforcement now is ex-cop Tim Burgess. In his 15 months on council, Burgess has dismayed local police accountability activists, who had welcomed his relatively thoughtful campaign rhetoric, by displaying a strong law-and-order streak once in office. Our conflict-averse council is likely to defer to his sensibilities on Nickels’ pick. And Burgess, arguably the council’s most conservative member, pulled his name out of this year’s mayoral race only a week after forming an exploratory committee–strongly suggesting a back room deal with Nickels that might well include both SPD issues and future mayoral aspirations.

In other words, don’t expect any meaningful opposition from city council if Nickels’ choice veers sharply from SPD’s recent history in its top position. Gil Kerlikowske’s nomination as Drug Czar is great news for our country’s drug policies. What it means going forward for Seattle is a very different matter.

This entry was posted in RagBlog and tagged Drug Czar, Obama Administration, War on Drugs. Bookmark the permalink.