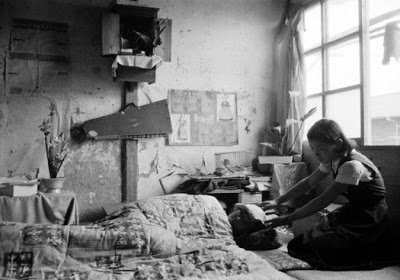 Hiroshima: Ten Years Later. “I’m Just Waiting For Death.” Those are the words of Mrs. Yoskio Nishikawa, 43, bedridden “A-Bomb widow” who lives on $22 a month in charity. Yukiko, 15, one of her four children, cools her forehead with a wet towel as the 70-pound widow rests in their nine-foot square room, part of a frame charity home housing families of 20 widows. A small wooden Shinto shrine, in memory of her blacksmith husband who was killed while riding to work, occupies a place of honor. Mrs. Nishikawa suffers from radiation effects because she combed the city searching for her husband after the bomb fell. She has a bad heart and liver trouble. (1955) Photo: Source.
A Flash of Memory
By Issey Miyake / July 13, 2009

Tokyo — IN April, President Obama pledged to seek peace and security in a world without nuclear weapons. He called for not simply a reduction, but elimination. His words awakened something buried deeply within me, something about which I have until now been reluctant to discuss.

I realized that I have, perhaps now more than ever, a personal and moral responsibility to speak out as one who survived what Mr. Obama called the “flash of light.”

On Aug. 6, 1945, the first atomic bomb was dropped on my hometown, Hiroshima. I was there, and only 7 years old. When I close my eyes, I still see things no one should ever experience: a bright red light, the black cloud soon after, people running in every direction trying desperately to escape — I remember it all. Within three years, my mother died from radiation exposure.

I have never chosen to share my memories or thoughts of that day. I have tried, albeit unsuccessfully, to put them behind me, preferring to think of things that can be created, not destroyed, and that bring beauty and joy. I gravitated toward the field of clothing design, partly because it is a creative format that is modern and optimistic.

I tried never to be defined by my past. I did not want to be labeled “the designer who survived the atomic bomb,” and therefore I have always avoided questions about Hiroshima. They made me uncomfortable.

But now I realize it is a subject that must be discussed if we are ever to rid the world of nuclear weapons. There is a movement in Hiroshima to invite Mr. Obama to Universal Peace Day on Aug. 6 — the annual commemoration of that fateful day. I hope he will accept. My wish is motivated by a desire not to dwell on the past, but rather to give a sign to the world that the American president’s goal is to work to eliminate nuclear wars in the future.

Last week, Russia and the United States signed an agreement to reduce nuclear arms. This was an important event. However, we are not naïve: no one person or country can stop nuclear warfare. In Japan, we live with the constant threat from our nuclear-armed neighbor North Korea. There are reports of other countries acquiring nuclear technology, too. For there to be any hope of peace, people around the world must add their voices to President Obama’s.

If Mr. Obama could walk across the Peace Bridge in Hiroshima — whose balustrades were designed by the Japanese-American sculptor Isamu Noguchi as a reminder both of his ties to East and West and of what humans do to one another out of hatred — it would be both a real and a symbolic step toward creating a world that knows no fear of nuclear threat. Every step taken is another step closer to world peace.

[Issey Miyake is a clothing designer. This article was translated by members of his staff from the Japanese.]

This entry was posted in RagBlog and tagged Nuclear Weapons, World Opinion. Bookmark the permalink.