Offshore Drilling Rigs Could Be in California’s Future 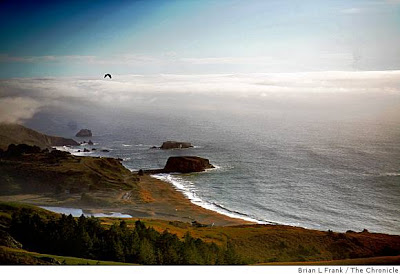 The coast off Jenner, north of Bodega Bay, is one area that would be attractive to oil companies, but the Cordell Bank marine sanctuary would still be off limits. Photo: Brian L Frank/The Chronicle.
Drillers eye oil reserves off California coast
By Jane Kay / December 29, 2008

The federal government is taking steps that may open California’s fabled coast to oil drilling in as few as three years, an action that could place dozens of platforms off the Sonoma, Mendocino and Humboldt coasts, and raises the specter of spills, air pollution and increased ship traffic into San Francisco Bay.

Millions of acres of oil deposits, mapped in the 1980s when then-Interior Secretary James Watt and Energy Secretary Donald Hodel pushed for California exploration, lie a few miles from the forested North Coast and near the mouth of the Russian River, as well as off Malibu, Santa Monica and La Jolla in Southern California.

“These are the targets,” said Richard Charter, a lobbyist for the Defenders of Wildlife Action Fund who worked for three decades to win congressional bans on offshore drilling. “You couldn’t design a better formula to create adverse impacts on California’s coastal-dependent economy.”

The bans that protected both of the nation’s coasts beginning in 1981, from California to the Pacific Northwest to the Atlantic Coast and the Straits of Florida, ended this year when Congress let the moratorium lapse.

President-elect Barack Obama hasn’t said whether he would overturn President Bush’s lifting last summer of the ban on drilling, as gas prices reached a historic high. Sen. Ken Salazar, D-Col., Obama’s pick as interior secretary and head of the nation’s ocean-drilling agency, hasn’t said what he would do in coastal waters.

The Interior Department has moved to open some or all federal waters, which begin 3 miles from shore and are outside state control, for exploration as early as 2010. Rigs could go up in 2012.

National marine sanctuaries off San Francisco and Monterey bays are off-limits in California. Areas open to drilling extend from Bodega Bay north to the Oregon border and from Morro Bay south to the U.S.-Mexico border.

According to the Interior Department, coastal areas nationwide that were affected by the drilling ban contain 18 billion barrels of oil and 76 trillion cubic feet of natural gas in what the agency called yet-to-be-discovered fields. The estimates are conservative and are based on seismic surveys in the late 1970s and early 1980s, before the moratorium went into effect.

“If you were allowed to go out and do new exploration, those numbers could go up or down. In most cases, you would expect them to go up,” said Dave Smith, deputy communications officer of the Interior Department’s Minerals Management Service, which oversees energy development in federal waters.

In California, any exploration and drilling would be close to shore, experts say. In contrast to the Gulf of Mexico, where drilling could occur in waters 10,000 feet deep, California’s holdings lie on its narrow, shallow continental shelf, the underwater edge of land where creatures died over the millennia to produce the oil.

If the Interior Department decides to explore off California’s coast, it could probably do so, some attorneys say. If a state objects to a lease plan, the president has the final say.

Once an area has been leased, the California Coastal Commission may review an oil company’s plan to explore or extract resources to assess if it is consistent with the state’s coastal management program. Conflicts can end up in court, said Alison Dettmer, the commission’s deputy director.

Californians have generally opposed drilling since a platform blowout in 1969 splashed 3 million gallons of black, gooey crude oil on 35 miles of beaches around Santa Barbara, killing otters and seabirds. The destruction of shoreline and wildlife sparked activism and led to the creation of the Coastal Commission.

But when gas prices peaked a few months ago amid cries of “drill, baby, drill” at rallies for GOP presidential candidate John McCain and running mate Sarah Palin, 51 percent of Californians said they favored more offshore drilling, according to a survey by the Public Policy Institute of California.

The Interior Department is reviewing comments about which coastal areas to include in the next five-year leasing plan. Oil companies want all of the nation’s coastal areas open and say they can produce oil offshore in a way that protects the environment. Gov. Arnold Schwarzenegger, who opposes new offshore development, has offered comments, as have environmental groups.

Obama’s administration and Congress will have the final say over which regions, if any, would be put up for possible lease sales. In Congress earlier this year, Salazar, Obama’s nominee for interior secretary, supported a bipartisan bill allowing exploration and production 50 miles out from the southern Atlantic coast with state approval. The bill died.

“We’ve been encouraged that the president-elect has chosen Sen. Salazar,” said Dan Naatz, vice president for federal resources with the Independent Petroleum Association of America, a group with 5,000 members that drill 90 percent of the oil and natural gas wells in the United States. “He’s from the West, and he understands federal land policy, which is really key.”

During this year’s presidential campaign, Obama was bombarded by questions about high gas prices and said new domestic drilling wouldn’t do much to lower gasoline prices but could have a place in a comprehensive energy program.

After introducing his green team of environment and energy chiefs recently, Obama said the foundation of the nation’s energy independence lies in the “power of wind and solar, in new crops and new technologies, in the innovation of our scientists and entrepreneurs and the dedication and skill of our workforce.”

He spoke of moving “beyond our oil addiction,” creating “a new, hybrid economy” and investing in “renewable energy that will give life to new businesses and industries.”

Obama didn’t mention oil drilling. When a reporter asked him if he would reinstate the moratorium, he said he wasn’t happy that the moratorium was allowed to lapse in Congress without a broader thought to how the country was going to reduce dependence on fossil fuels.

He reiterated his campaign position that he was open to the idea of offshore drilling if it was part of a comprehensive package, adding that he would turn over the question to his team.

In the 1970s and 1980s, before the moratorium on offshore drilling fully took effect, the federal government produced a series of maps showing areas in California of prospective interest to the oil industry. Those maps offer clues to where oil companies would bid if they had the opportunity.

The last proposed lease sale in 1987, thwarted by the moratorium, would have opened 6.5 million acres off the North Coast. Off Mendocino and Humboldt counties, the tracts for sale lay from 3 to 27 miles offshore, and some of the 24 planned platforms, some of them 300 feet tall and each with dozens of wells, would have been visible from land.

Tourism and commercial fisheries would have been affected, according to an environmental review then, while as many as 240 new oil tanker trips from Fort Bragg and Eureka to San Francisco Bay refineries were predicted under the full development scenario. The probability of one or more spills occurring would be 94 percent for accidents involving 1,000 barrels or more, according to documents.

Rep. Lois Capps, D-Santa Barbara, a member of the House Natural Resources Committee, recently said oil drilling will be part of a comprehensive energy policy focusing on renewable sources, but she would like to see drilling occur only on land and in the Gulf of Mexico where infrastructure is in place.

“I was living in Goleta. I just had two children, and my husband was a young professor at UC Santa Barbara. It was a devastating experience,” she said. “The birds and other animals got trapped in the oil. So many people waded out in boots just inch by inch trying to rescue our wildlife. It ruined our tourism for many years.

“I think about it all the time, especially last week when we had had a spill at the same platform. It was a small spill, 1,000 gallons, but it was a wake-up call.”

This entry was posted in RagBlog and tagged Bush Administration, Energy, Oil Exploration. Bookmark the permalink.