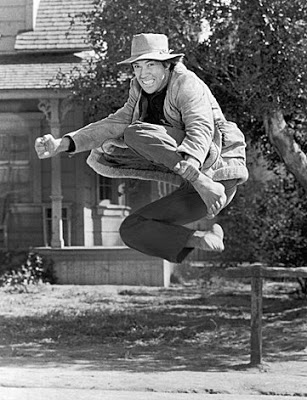 Auto-erotic asphyxiation is quite common, but is usually kept quiet when the deceased is not famous. Just like the birth of babies of difficult to discern sex is usually “fixed” and covered up.

How do I know?

Well, there are a number of guys in the Academy of Criminal Justice Sciences (I’ve been a member since 1990 or so) who make their livings as auto-erotic asphyxiation experts.

Well, if it’s auto-erotic asphyxiation, the insurance has to pay, since that is death by accident. If it’s suicide, the insurance does not have to pay. There’s normally at least one expert on each side.

I have seen their photo collections. All the victims are nude except the ones that are cross-dressed. Men outnumber women 7 or 8 to one.

Some of the cases are really hard.

One fighter ace from the Vietnam War did it in a really simple way, hanging over the edge of the bed. If he had not been cross-dressed, I think the insurance company would have won that one.

Then there was a college girl found hanging, nude, in a dorm closet with all the doors and windows locked, just before she was to both graduate and get married. It was treated first as a very clever homicide, principally because nobody could figure out how her hands got strapped behind her back.

The case was solved by the expert’s wife, based on something she noticed in the picture of the way the body was found. I must confess I saw the picture and it went right past me.

She noticed a brand name of belt had secured the wrists and she knew that it was woven in a manner so it would bend like a regular belt would not. She was able to show her husband how she could step in and out of having the belt in the very position in which it was found.

Then there was a guy who liked to chain his genitals to his VW and drive it around a parking lot, ghost riding. His sex play went wrong when the chain wrapped around the axle and he could no longer reach the controls. He was found twisted up into the wheel well. Boy, that had to hurt….

Personally, I find this drive to “other” other people in terms of their sex practices much more disturbing than the practices.

And, of course, if you take up for somebody who has a stuffed animal fetish or whatever, the uglies immediately assume that you must have the same fetish.

I am skeptical that there is anybody who has no fetish at all. That is, an object or part of the body or song or place or whatever that begins the process of sexual arousal without regard to the rest of the context.

It is not strange to me that more men are “into” fetishes deeply than women. It is one of the adaptive traits that sets men apart from women that we can be sexually aroused “out of context,” the most obvious being response to another woman when in the presence of our mate–which does us no good in the political bedroom but has its advantages for the species generally.

I can tell you exactly how AEA got started.

Hangings used to be public. It was hard not to notice that felons typically died with a roaring erection. There was some colloquialism for a post-mortem erection that escapes my aged brain right now, and good literature is rife with references to it–e.g., Billy Budd. Melville is no pornographer and neither were most of the other writers who referenced it. It was common and everybody knew it. If you did not, you had never seen a hanging and in the days of the death penalty for any felony, that meant you didn’t get out much.

Of course, those among us medically trained will know the counter-intuitive fact that an erection results not from tense muscles but from relaxed ones, and this explains why the erections did not disappear when the hangmen moved from “turning off” to the drop.

Yes, the drop, done correctly, broke the neck and killed virtually instantly. But there was the erection anyway. What happened to the major erogenous zone being the brain? How can a person get turned on with a broken neck?

While I have no first hand experience, I doubt that you can get turned on while being executed unless you have a death fetish.

Non-medical types now don’t know that; even medical types then did not know it. I guess they thought his Invisible Friend was giving him a delightful send off.

Anyway, a little light strangulation during sex, people found out, can give you quite an intense jolt. Either sex. Some people want to dial up their orgasms and they get in the habit.

All of this seems perfectly understandable to me and no occasion to belittle the dead.

[Steve Russell, Cherokee Nation of Oklahoma, is a Texas trial court judge by assignment and an associate professor of criminal justice at Indiana University. Steve, who lives in Bloomington, wrote for Austin’s The Rag in the Sixties and seventies and is a regular contributor to The Rag Blog.]

This entry was posted in Rag Bloggers and tagged Criminal Justice, Fetishes, Sexuality. Bookmark the permalink.