It was to gain Dr. Alan Berkman’s release from prison, so he could receive treatment for his cancer, that Marilyn Buck, Susan Rosenberg, and Laura Whitethorn finally pled guilty to the “conspiracy” charge that netted former Ragstaffer Buck her 80-year sentence, in an agreement with federal prosecutors. Both Susan and Laura have since been freed. Buck could be released in 2010. 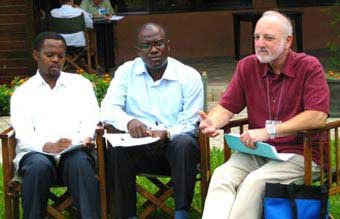 Dr. Alan Berkman in 2006 with AIDS activists from Rwanda.

‘When Health GAP was formed… the anti-viral aids medicine ‘cocktail’ cost ten to fifteen thousand dollars a year… Now the drugs cost about eighty-seven dollars a year and some four million people are taking the medicine, prolonging their lives.’

After battling recurrent cancers for half his life, Alan Berkman died in Memorial Sloan Kettering Hospital in New York City around seven o’clock in the evening of June 5, 2009.

He was under a death sentence with a cancer that was going to kill him. He chose to try a risky stem cell transplant procedure where he first had to have chemo-therapy to knock out his own stem cells and then replace them with the stem cells of a donor. Even finding the donor was difficult, the holocaust having significantly narrowed the gene pool of persons who might have a match. One was found.

Alan entered the hospital knowing he might not get out. He understood what his doctors were telling him. He himself was a doctor, a Sixties graduate of Columbia’s school for physicians and surgeons and now a professor there in the school of public health.

Alan first was struck by cancer when he was in prison. He did eight years, four of them in solitary. He diagnosed himself. But to no avail. The authorities would do nothing, as if they wanted him to die. They must have hated Alan. A communist. A Jew. A doctor. A supporter of blacks and Latinos and Native Americans at the second battle of Wounded Knee.

They knew his history. It was quite a dossier. A Sixties radical. SDS. Active in the anti-war movement. A practicing doctor in New York’s poor neighborhoods. Forced underground for years because he wouldn’t give up the name of a woman he treated for a gunshot wound she got in a failed Brinks truck robbery that killed two cops and a security guard in Rockland County. Then arrested and convicted and doing hard time in a maximum security prison. He helped a cop killer. And now he is in our hands. But Alan was unbent and unbowed. He was tough.

Finally his family and attorneys got him medical attention. He told me they operated on him while handcuffed to a gurney. Deep stomach surgery where the muscles need to be cut. When he awoke from anesthesia they took the handcuffs off and made him get up off the gurney and walk. He got cancer again before getting out on parole. Amazingly [attorneys] Bill Kunstler and Ron Kuby prevented the State from taking away his medical license. He started working as an AIDS doctor in the South Bronx.

That’s when I met him. About twenty years ago. He helped me on a [legal] case. We drove out to Brooklyn to see the client and then had dinner, the first of many. A steak and a martini. Alan and Barbara, Debby and me. We four. Good friends and comrades.

We went back to that restaurant a couple of weeks ago, just before Alan checked into Memorial. We thought we would see him the next week at the event honoring him and Dr. David Hoos for co-founding Health Gap. But that was not to be. His doctors couldn’t give him the time and he was whisked into the hospital for first the chemo and then the transplant. Alan got the new cells but died before they could take root.

When Health GAP was formed with the help of Act Up and Housing Works, the anti-viral aids medicine “cocktail” cost ten to fifteen thousand dollars a year. Big Pharma controlled manufacturing and distribution with their intellectual property rights. Alan helped change that, not having the requisite respect for private property. Now the drugs cost about eighty-seven dollars a year and some four million people are taking the medicine, prolonging their lives.

Alan wasn’t religious. Religion to him was superstition. Being part of a sect was too narrow and confining for Alan. The Jewish heretic who transcends Jewry belongs to a Jewish tradition. The historian Isaac Deutscher had a phrase for it, “the non-Jewish Jew.” Alan was in line with the great Jewish heretics, rebels, and revolutionaries of modern thought; Spinoza, Heine, Marx, Luxemburg, Trotsky, Freud, and Einstein. They too went beyond the boundaries of Judaism, finding it too narrow, archaic, constricting.

I don’t wish to stretch the comparison. Alan was not so much a radical thinker as a man of action. But his intellectual understanding — and he was well educated and widely read — powered his activity. He had in common with these great thinkers the idea that for knowledge to be real it must be acted upon. As Marx observed: “Hitherto philosophers have only interpreted the world, the point however is to change it.”

Like his intellectual predecessors Alan saw reality in a state of flux, as dynamic not static, and he was aware of the constantly changing and contradictory nature of society. Alan was essentially an optimist and shared with the great Jewish revolutionaries an optimistic belief in humanity and a belief in the solidarity of humankind.

The stem cell procedure failed to save him. Alan Berkman has passed, but his work and his example have taken root. Good bye dear friend. We all remember you with the two best words in our language: Love and Solidarity.