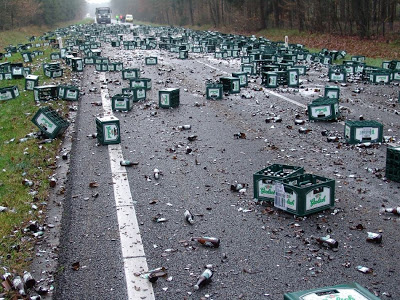 Beer storm: Photo by Ghostbuster 2.
‘If a hurricane came through we can handle it. We will make sure that Manatee and Sarasota counties have beer…’
By J. Jurie / The Rag Blog / August 20, 2008

ORLANDO — Tropical storm Fay has been a very slow moving event. Arriving Monday night, it’s still here tonight (Tuesday). The better part of today was overcast but relatively calm and not that much rain. The only “damage” has been a fair number of palm fronds blown down in the yard. I’d be surprised if where I am there’s been more than three or four inches of rain. Quite a bit different in Brevard County, just to the east by about 20-25 miles, where they’ve borne the brunt so far. There, some areas have officially reported over 16 inches of rain the past two days, with unofficial reports of as much as 25 to 30 inches. Needless to say, there has been some flooding, but no serious injuries or fatalities reported.

According to a Bradenton Herald article (Richard Dymond, “New Developments Put Ranch in High Spirits,” June 29, 2008, pp. 1A & 3A) about a new beer distributorship near Florida’s gulf coast: “The massive $18 million distributorship includes 150,000 square feet of warehouse on 22 acres…The new warehouse, built of steel and preformed concrete walls, will hold 500,000-plus ca ses of beer and other products.” Said the warehouse inventory manager: “The warehouse is also hurricane-hardened. If a hurricane came through we can handle it. We will make sure that Manatee and Sarasota counties have beer…”

But will they be able to ensure the beer is cold?

This entry was posted in RagBlog and tagged FEMA, Florida, Tropical Storms. Bookmark the permalink.