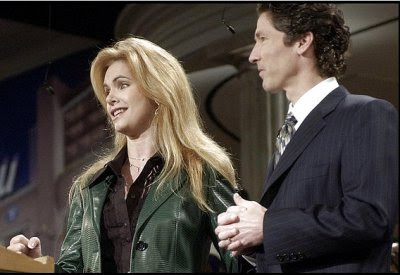 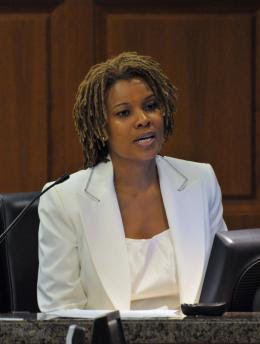 For heartsick former supporters of John Edwards, this week offers an edifying tabloid alternative: the civil trial of Victoria Osteen, wife of megachurch minister and televangelist Joel Osteen, for assaulting a flight attendant. The issue was what is sometimes described as a “spill” and sometimes as a “stain” on the armrest of Mrs. Osteen’s first class seat, which the flight attendant refused to clean up with sufficient alacrity because she was busy assisting others board. Although there is no evidence that the spill consisted of tuberculosis-ridden phlegm or avian flu-rich bird poop, Osteen was mightily pissed, allegedly pushing and punching the flight attendant and making such a ruckus that the Osteen family had to be removed from the flight.

I would be more sympathetic to the flight attendant, Sharon Brown, if she weren’t demanding 10 percent of Osteen’s fortune to compensate for injuries including a “loss of faith” and hemorrhoids somehow incurred from a frontal assault. But it isn’t easy being a flight attendant in this era of layoffs, pay cuts and packed planes – certainly not compared to being a millionaire on her way to Vail. Whatever dubious substance Victoria Osteen faced on that first class armrest, she should have been able to derive some serenity from the fact that the church she co-pastors draws 40,000 worshippers a week and that her husband has been dubbed “America’s Most Influential Christian.”

Just another celebrity meltdown set off by insufficiently servile servers? Recall Russell Crowe’s 2005 assault with a telephone on a SoHo hotel clerk, or Naomi Campbell’s attacks with similar weapons –cell phone and Blackberry– on members of her own staff. But there’s a curious antecedent here that Christians would do well to ponder: In 1997, another megachurch pastor and leading televangelist – Robert Schuller – was prosecuted for an eerily similar first class tantrum.

Schuller, like the Osteens, is a proponent of positive thinking – the doctrine that God intends for you to be rich, healthy and generally “great” right here in this life. While politicos have focused on the Christian Right, there’s been far less attention to the fast growing brand of Christianity Light, also represented by televangelists Joyce Meyer, Benny Hinn and Creflo Dollar. Positive thinking is the theology of the modern megachurch, and it avoids all mention of sin –including the “sins” of abortion and homosexuality – lest such “negative” topics turn off any potential converts or “seekers.” Its promise is that you can have anything you want simply by “visualizing” it or, as Osteen puts it, “believing for it” — a doctrine derided by some Christian critics as “name it and claim it.”

Schuller faced a different biohazard on his first class flight in ’97 – cheese. When the flight attendant gave him a fruit and cheese plate for dessert, Schuller insisted that the cheese be removed. The flight attendant refused, explaining, reasonably enough, that all the fruit had been plated with cheese and could be contaminated, from a cheese- allergy sufferer’s point of view . But the pastor was simply on a low-fat diet and did not want to see the cheese on his plate, so he got out of his seat and accosted the flight attendant, shaking him violently by the shoulders. Schuller ended up paying an $1100 fine and undergoing six months of police supervision.

In the theology of Christian positive thinking, “everything happens for a reason.” The Osteens may conclude that the divine intention was to prod them into to emulating Joyce Meyers and Creflo Dollar by investing in a private jet. But there’s another possible message from on high: that this brand of Christianity fosters a distinctly un-Christian narcissism.

Consider the ways the Lord works in the life of the Osteens, as recounted in Joel’s book Your Best Life Now, which has sold four million copies and is graced by a back cover photo of the smiling couple. Acting through Victoria, who kept “speaking words of faith and victory” on the subject, Joel was led to build the family “an elegant home.” On other occasions, God intervened to save Joel from a speeding ticket and to get him not only a good parking spot but “the premier spot in that parking lot.” Why God did not swoop down with a sponge and clean up the offending stain on the armrest remains a mystery, because Osteen’s deity is less the Master of the Universe than an obliging factotum.

Plenty of Christians have already made the point that the positive thinking of Christianity Light is demeaning to God, and I leave them to pursue this critique. More importantly, from a secular point of view, it’s dismissive of other humans, and not only flight attendants. If a person is speeding, shouldn’t he get a ticket to deter him from endangering others? And if Osteen gets the premier parking spot, what about all the other people consigned to the remote fringes of the lot? Christianity, at best, is about a sacrificial love for others, not about getting to the head of the line.

If the Osteens’ brand of religion is what flight attendant Sharon Brown lost faith in as a result of being manhandled by on that plane to Vail, then the suit should be dropped, because Victoria Osteen has already done her enough of a favor.