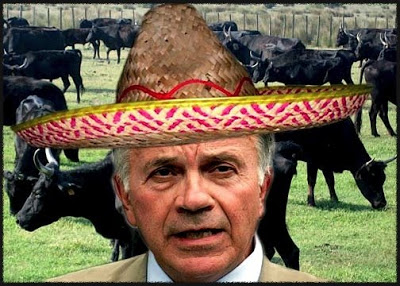 This is just the tip of the iceberg of a long list of hateful, insane acts and statements by Tancredo.

Like a buzzard to fresh roadkill, disgraced former GOP congressman, Tom Tancredo could not pass up the lights and cameras. Dusting off his career xenophobic Latino bashing, he attacked Supreme Court nominee, Judge Sonia Sotomayor calling her a “racist.”

In case you don’t immediately place Uncle Tom Tancredo, he is the grandson of Italian immigrants and ran for congress from Colorado’s 6th Congressional District promising to only serve three terms. Tancredo stumped with unforgettable magniloquence, “We want to reinvigorate the electoral process by introducing people into the system who think of government service as a temporary endeavor, not as a career.”

He etched in stone his three term limit promise saying, “For me, the issue of giving one’s word and promising to do something like this is more important than the rest of it … I took the pledge. I will live up to the pledge. That’s it. That’s the overriding issue.”

Tancredo broke his pledge and ran for a fourth term in Congress in 2004.

Then on April 2, 2007, Tancredo announced that he would run for President in the 2008 election. His singular platform issue, his signature fixation, was illegal immigrants and immigration reform.

In the May 3, 2007 debate among the ten candidates for the 2008 Republican Presidential nomination, Tancredo was one of three who raised their hands when asked if anyone did not believe in the theory of evolution. Starting to place him now?

A month before he dropped out of the race, he ran a TV ad with a voice of death warning, “There are consequences to open borders beyond the 20 million aliens who have come to take our jobs … the price we pay for spineless politicians who refuse to defend our borders against those who come to kill.” Mercifully, he ended his candidacy on his 62nd birthday.

During his time as a US Congressman, he was a strident anti-abortionist, and had hawkish pronouncements on the Iraq war, even though when he was eligible for the Vietnam war draft, in June 1969 he went for his physical, telling doctors he had been treated for depression, and eventually got a “1-Y” deferment.

Though he was raised a Roman Catholic, he attacked Pope Benedict XVI for “encouraging illegal immigration to the USA to boost membership in the Catholic Church.” Tancredo now attends a Christian evangelical church.

But illegal immigration is his constant one-note samba. Whenever Lou Dobbs hears it he dances gleefully.

Tancredo was persona non grata at the White House after getting into a shouting match with Karl Rove, ranting at him, “if the nation suffered another attack at the hands of terrorists able to skirt immigration laws, the blood of the people killed would be on Bush’s and Congress’ hands.” Rove had him blacklisted from entering the White House, calling Tancredo a “traitor to the Party.”

Tancredo said if we have another terrorist attack on the USA we should bomb Mecca.

He suggested that state legislators and ‘sanctuary city’ mayors should be imprisoned for passing laws contrary to federal immigration law.

This is just the tip of the iceberg of a long list of hateful, insane acts and statements by Tancredo who, incidentally, was given an A+ for his opposition to amnesty for illegal aliens by “Americans for Better Immigration.” The average Congressmen was given a C+.

Last Thursday, May 28th, Tancredo appeared on CNN to voice his opposition to Judge Sotomayor as nominee for appointment to the Supreme Court. CNN host, Rick Sanchez asked him if he thought Sonia Sotomayor is a racist, Tancredo replied “certainly her words would indicate that that is the truth” and he then compared the Hispanic-American advocacy group. “La Raza” to the KKK.

And Tancredo would know about the KKK. On September 11, 2006 in Colombia, South Carolina he was guest speaker before a group he helped form, the “Americans Have Had Enough Coalition.” The room in which he spoke was reportedly decked out with large portraits of Robert E. Lee and lots of Confederate battle flags. After Tancredo spoke, men dressed in Confederate uniforms are said to have broken into a rousing chorus of “Dixie.”

Tancredo panders to racists. He thunders about “racial multiculturalism” being the ruin of America. He called Miami a “Third World Country.” Governor Jeb Bush called his remarks “naive” and countless organizations and political leaders have denounced Tancredo’s blatant racism.

I will stop here, but I just wanted to paint a clear picture of this loud, mistaken dogmatist who now is the latest spokesperson du jour for the leaderless Republican Party, whether they like it or not.

Judge Sotomayor’s early comment, taken out of context by both Tancredo and Rush Limbaugh, who compared Sotomayor to KKK leader David Duke, will certainly be thoroughly reviewed in her upcoming confirmation hearing. Hopefully Republicans in the hearing will not take the low road.

Too bad Tancredo and Limbaugh are both opponents of same-sex marriage, because theirs would be a marriage made in hypocrites’ heaven.