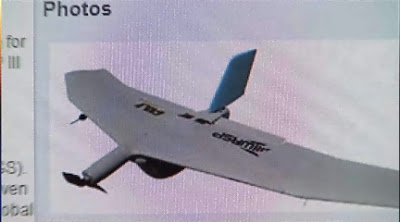 AUSTIN — The suspect’s house, just west of this city, sat on a hilltop at the end of a steep, exposed driveway. Agents with the Texas Department of Public Safety believed the man inside had a large stash of drugs and a cache of weapons, including high-caliber rifles.

As dawn broke, a SWAT team waiting to execute a search warrant wanted a last-minute aerial sweep of the property, in part to check for unseen dangers. But there was a problem: The department’s aircraft section feared that if it put up a helicopter, the suspect might try to shoot it down.

So the Texas agents did what no state or local law enforcement agency had done before in a high-risk operation: They launched a drone. A bird-size device called a Wasp floated hundreds of feet into the sky and instantly beamed live video to agents on the ground. The SWAT team stormed the house and arrested the suspect.

“The nice thing is it’s covert,” said Bill C. Nabors, Jr., chief pilot with the Texas DPS, who in a recent interview described the 2009 operation for the first time publicly. “You don’t hear it, and unless you know what you’re looking for, you can’t see it.”

The drone technology that has revolutionized warfare in Iraq, Afghanistan, and Pakistan is entering the national airspace: Unmanned aircraft are patrolling the border with Mexico, searching for missing persons over difficult terrain, flying into hurricanes to collect weather data, photographing traffic accident scenes, and tracking the spread of forest fires.

But the operation outside Austin presaged what could prove to be one of the most far-reaching and potentially controversial uses of drones: as a new and relatively cheap surveillance tool in domestic law enforcement.

For now, the use of drones for high-risk operations is exceedingly rare. The Federal Aviation Administration — which controls the national airspace — requires the few police departments with drones to seek emergency authorization if they want to deploy one in an actual operation. Because of concerns about safety, it only occasionally grants permission.

But by 2013, the FAA expects to have formulated new rules that would allow police across the country to routinely fly lightweight, unarmed drones up to 400 feet above the ground — high enough for them to be largely invisible eyes in the sky.

Such technology could allow police to record the activities of the public below with high-resolution, infrared and thermal-imaging cameras.

One manufacturer already advertises one of its small systems as ideal for “urban monitoring.” The military, often a first user of technologies that migrate to civilian life, is about to deploy a system in Afghanistan that will be able to scan an area the size of a small town. And the most sophisticated robotics use artificial intelligence to seek out and record certain kinds of suspicious activity.

But when drones come to perch in numbers over American communities, they will drive fresh debates about the boundaries of privacy. The sheer power of some of the cameras that can be mounted on them is likely to bring fresh search-and-seizure cases before the courts, and concern about the technology’s potential misuse could unsettle the public.

“Drones raise the prospect of much more pervasive surveillance,” said Jay Stanley, a senior policy analyst with the American Civil Liberties Union’s Speech, Privacy, and Technology Project. “We are not against them, absolutely. They can be a valuable tool in certain kinds of operations. But what we don’t want to see is their pervasive use to watch over the American people.”

The police are likely to use drones in tactical operations and to view clearly public spaces. Legal experts say they will have to obtain a warrant to spy on private homes. 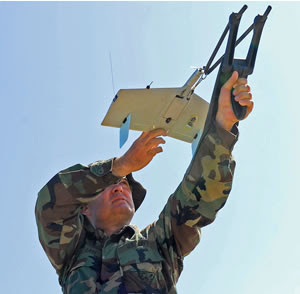 As of December 1, according to the FAA, there were more than 270 active authorizations for the use of dozens of kinds of drones. Approximately 35 percent of these permissions are held by the Defense Department, 11 percent by NASA and 5 percent by the Department of Homeland Security, including permission to fly Predators on the northern and southern borders.

Other users are law enforcement agencies, including the FBI, as well as manufacturers and academic institutions.

For now, only a handful of police departments and sheriff’s offices in the United States — including in Queen Anne’s County, Md., Miami-Dade County, Fla., and Mesa County, Colo.– fly drones. They so do as part of pilot programs that mostly limit the use of the drones to training exercises over unpopulated areas.

Among state and local agencies, the Texas Department of Public Safety has been the most active user of drones for high-risk operations. Since the search outside Austin, Nabors said, the agency has run six operations with drones, all near the southern border, where officers conducted surveillance of drug and human traffickers.

Some police officials, as well as the manufacturers of unmanned aerial systems, have been clamoring for the FAA to allow their rapid deployment by law enforcement. They tout the technology as a tactical game-changer in scenarios such as hostage situations and high-speed chases.

Overseas, the drones have drawn interest as well. A consortium of police departments in Britain is developing plans to use them to monitor the roads, watch public events such as protests, and conduct covert urban surveillance, according to the Guardian newspaper. Senior British police officials would like the machines to be in the air in time for the 2012 Olympics in London.

“Not since the Taser has a technology promised so much for law enforcement,” said Ben Miller of the Mesa County Sheriff’s Office, which has used its drone, called a Draganflyer, to search for missing persons after receiving emergency authorization from the FAA.

Cost has become a big selling point. A drone system, which includes a ground operating computer, can cost less than $50,000. A new police helicopter can cost up to $1 million. As a consequence, fewer than 300 of the approximately 19,000 law enforcement agencies in the United States have an aviation capability.

“The cost issue is significant,” said Martin Jackson, president of the Airborne Law Enforcement Association. “Once they open the airspace up [to drones], I think there will be quite a bit of demand.”

The FAA is reluctant to simply open up airspace, even to small drones. The agency said it is addressing two critical questions: How will unmanned aircraft “handle communication, command and control”? And how will they “sense and avoid” other aircraft, a basic safety element in manned aviation?

Military studies suggest that drones have a much higher accident rate than manned aircraft. That is, in part, because the military is using drones in a battlefield environment. But even outside war zones, drones have slipped out of their handlers’ control.

In the summer, a Navy drone, experiencing what the military called a software problem, wandered into restricted Washington airspace. Last month, a small Mexican army drone crashed into a residential yard in El Paso.

There are also regulatory issues with civilian agencies using military frequencies to operate drones, a problem that surfaced in recent months and has grounded the Texas DPS drones, which have not been flown since August.

“What level of trust do we give this technology? We just don’t yet have the data,” said John Allen, director of Flight Standards Service in the FAA’s Office of Aviation Safety. “We are moving cautiously to keep the National Airspace System safe for all civil operations. It’s the FAA’s responsibility to make sure no one is harmed by [an unmanned aircraft system] in the air or on the ground.”

Officials in Texas said they supported the FAA’s concern about safety.

“We have 23 aircraft and 50 pilots, so I’m of the opinion that FAA should proceed cautiously,” Nabors said.

Much of the legal framework to fly drones has been established by cases that have examined the use of manned aircraft and various technologies to conduct surveillance of both public spaces and private homes.

In a 1986 Supreme Court case, justices were asked whether a police department violated constitutional protections against illegal search and seizure after it flew a small plane above the back yard of a man suspected of growing marijuana. The court ruled that “the Fourth Amendment simply does not require the police traveling in the public airways at this altitude to obtain a warrant in order to observe what is visible to the naked eye.”

In a 2001 case, however, also involving a search for marijuana, the court was more skeptical of police tactics. It ruled that an Oregon police department conducted an illegal search when it used a thermal imaging device to detect heat coming from the home of an man suspected of growing marijuana indoors.

“The question we confront today is what limits there are upon this power of technology to shrink the realm of guaranteed privacy,” Justice Antonin Scalia wrote in the 2001 case.

Still, Joseph J. Vacek, a professor in the Aviation Department at the University of North Dakota who has studied the potential use of drones in law enforcement, said the main objections to the use of domestic drones will probably have little to do with the Constitution.

“Where I see the challenge is the social norm,” Vacek said. “Most people are not okay with constant watching. That hover-and-stare capability used to its maximum potential will probably ruffle a lot of civic feathers.”

At least one community has already balked at the prospect of unmanned aircraft.

The Houston Police Department considered participating in a pilot program to study the use of drones, including for evacuations, search and rescue, and tactical operations. In the end, it withdrew.

A spokesman for Houston police said the department would not comment on why the program, to have been run in cooperation with the FAA, was aborted in 2007, but traffic tickets might have had something to do with it.

When KPRC-TV in Houston, which is owned by The Washington Post Co., discovered a secret drone air show for dozens of officers at a remote location 70 miles from Houston, police officials were forced to call a hasty news conference to explain their interest in the technology.

A senior officer in Houston then mentioned to reporters that drones might ultimately be used for recording traffic violations.