Politics of Fear : A Historical Perspective 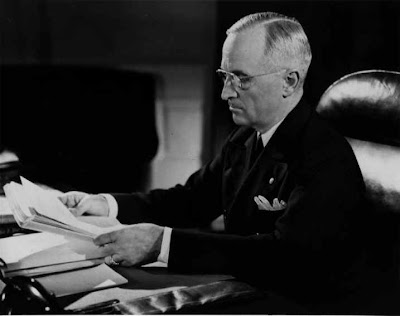 Harry Truman delivers his “Truman Doctrine” speech to Congress on March 12, 1947. Photo from Truman Presidential Museum and Library.
The politics of fear:
A basic tool of reaction

“Ridge writes that there was a ‘vigorous, some might say dramatic discussion’ about raising the threat level. The former Republican governor of Pennsylvania (and first secretary for Homeland Security) says his aides told the White House that doing so would politicize national security.” (‘Ridge Felt a Push to Politicize Alert Levels,” Boston Globe, August 21, 2009).

A basic tactic used by American politicians to marshal support for policies and politicians that ordinary citizens, given their common sense and self-interest would never support, is to create a sense of fear.

The “politics of fear” has a long and venal history in American political life. We can point to warnings of the penetration of foreigners into our public life before the civil war, to dangerous Reds in the struggle for the eight-hour day in the 1880s, to the Red scares of the post-World War I and II periods.

The politics of fear has always used class hatred and class envy, racism, sexism, homophobia, and a sense of the “alien” to create enthusiasm for policies that are backward and inhumane.

After World War II, opinion polls indicated that most Americans hoped for a period of peace built upon the continued collaboration of the powerful wartime allies, the United States, the former Soviet Union, and Great Britain. But, as President Truman articulated in a relatively unknown speech to a gathering at Baylor University on March, 6, 1947, the United States was committed to the creation of a global economy based upon private enterprise, foreign investment, and free trade. He alluded to forces in the world that sought to organize economic life around different principles, national autonomous development and state directed economies.

What the Truman administration had been discussing in private was not a public debate on the virtues of free markets versus national planning, but a global crusade against “communist tyranny.” At an apocryphal meeting of key aides and politicians in February, 1947, before Truman’s famous “Truman Doctrine” speech of March 13, the formerly isolationist senator from Michigan, Arthur Vandenberg, reportedly declared that he would support a global policy, presumably to promote free market capitalism, but he advised that the president should “scare hell out of the American people.”

Why? Because the American people still thought peace was possible between the East and the West. In March, Truman warned Congress that the United States was going to be engaged in a long-term struggle against the forces of tyranny in the world, the international communist menace.

In the 1950s, President Eisenhower’s Secretary of State, John Foster Dulles, warned that President Jacob Arbenz, of Guatemala, constituted a threat to the Central American isthmus, and eventually the United States itself. Since Arbenz supported the expropriation of unused land owned by the United Fruit Company, the administration claimed he was moving toward communism.

Candidate John Kennedy framed his campaign for president around the fears of a “missile gap” that had allegedly opened up between the United States and the Soviet Union and the spread of communism to 90 miles off our shores on the island of Cuba.

Ronald Reagan, another presidential candidate, powerfully introduced the idea of a “the window of vulnerability” to popular discourse on the dangers to American freedom if the incumbent candidate Jimmy Carter was reelected and the government did not dramatically increase military spending.

With the end of the Cold War, new enemies needed to be constructed. And, indeed they were. They were more diabolical, less tangible than the Soviet Union and international communism. These included “failed states,” “rogue states,” and “terrorists.”

So, in a new book, not to anyone’s surprise (except for the dense mainstream media), a former Bush official, Thomas Ridge, reports on the latest gimmick in the politics of fear tool kit, color coated signals of threat levels. And in this case, once again the threat levels were designed and used, not only to engender fear and quiescent support for insane war policies but to support candidates who created these policies.

Reflecting on the politics of fear and its long history, we can extrapolate some core ideas about it and how it works. The politics of fear creates demonic enemies such as communists, terrorists, foreigners, or people who are defined as different. The politics of fear requires an implied or stated prediction of doom. If the people do not support what is being advocated, the consequences for human survival would be in jeopardy. Only clear and total support of the policies and politicians promoting it can save us from the apocalypse. Finally, in most instances the politics of fear relates to war and militarism.

The Nixon administration added to the politics of fear the militarization of domestic policies as well. For example, the US needed to commit to a war on cancer or a war on drugs. While military images verbally have not been added to the debate about health care reform today, some opponents have begun to carry guns to places where debates are occurring, suggesting that this debate is indeed a prelude to war.

What are some lessons that this argument raises for progressives to consider? First, we must recognize that the politics of fear undergirds much of our political discourse and it has for a long time. Second, the politics of fear is based on distortions of other peoples’ thoughts and behaviors and other countries’ intentions and what their actions might mean for us. Third, we must be ready to challenge virtually every instance in which the politics of fear is used to coerce and manipulate people. Fourth, we need to articulate more vigorously our own public policy proposals and our own vision of how we can build a society that is based on social and economic justice rather than fear, enemies, and the prospects of doom.