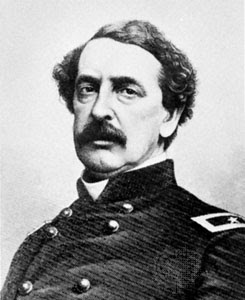 Abner Doubleday: “Baseball? What’s that?”
America and Baseball
By George Will / March 30, 2008
WASHINGTON — Washington’s first major league baseball team, the Senators, was owned by Clark Griffith, who, in the democratic, give-the-people-what-they-want spirit of the city, said: “Fans like home runs — and we have assembled a pitching staff to please our fans.” Today, Washington’s third team, the Nationals, opens a new ballpark near the Capitol, an appropriate setting for the national pastime. Remember, Lincoln’s last words, whispered to Maj. Gen. Abner Doubleday, were: “Don’t … let … baseball … die.”

Or so said a solemn Bill Stern to a radio audience of millions. Stern, who died in 1971, was a famous sportscaster whose commitment to fact was episodic. A wit responded that if Lincoln had said that to Doubleday (who was not there), Doubleday might have replied, “What’s baseball?”

Baseball’s creation myth is that young Doubleday invented the sport one summer day in 1839 in farmer Phinney’s pasture near Cooperstown. Actually, Doubleday spent that summer at West Point. The only thing he ever started, sort of, was the Civil War: He was an artillery captain at Fort Sumter. When he died in 1893, his New York Times obituary did not mention baseball.

Today, baseball arrives in the nick of time to serve an urgent national need. It gives Americans something to think about other than superdelegates. Think instead about:

For you who wasted the winter by not studying such stuff, the answers are below. The rest of you probably are SABRmetricians. Tim Kurkjian of ESPN (do you know that more than 10 American children have been named Espn?) recalls a convention of the Society for American Baseball Research:

“‘Who from SABR might know where I can find the all-time list of pinch-hit, extra-inning grand slams?’ I asked the very first man I saw at the convention. The man smiled and — I am not making this up — pulled the list from his breast pocket. ‘I have it right here,’ he said.”

Would that today’s subprime wizards of Wall Street had comparable mastery of the numbers important to their business. What Edmund Burke said of the study of law — that it sharpens the mind by narrowing it — might be true of baseball, too, but baseball people at least know what they are supposed to know. Long after he retired, Ted Williams ran into a former pitcher who said he once struck out Williams. “Slider low and away,” said Williams. “Old men forget,” said Shakespeare’s Henry V at Agincourt. Old baseball men don’t.

Washington was the setting for “Damn Yankees,” the most stirring drama since Shakespeare, who didn’t do musicals. Opening in 1955, it concerned a Senators’ fan who sold his soul to the devil in exchange for one terrific season as a Senators’ outfielder. This is supposedly a Faustian bargain, but such bargains are presumed to be bad. What is a mere soul when weighed against such a season?

Of course, there might be a gender difference here. As the philosopher Dave Barry has noted, “If a woman has to choose between catching a fly ball and saving an infant’s life, she will choose to save the infant’s life without even considering if there are men on base.”

Bill Veeck, who did more for America in one night than most of us do in a lifetime (the night in September 1937 he planted the ivy along Wrigley Field’s outfield walls), said that the great thing about baseball — aside from the fact that you do not need to be 7 feet wide or 7 feet tall in order to play it — is: Three strikes and you’re out, and the best lawyer can’t help you. Baseball, which provides satisfying finality and then does it again the next day, is a severe meritocracy that illustrates the axiom that there is very little difference between men but that difference makes a big difference.

This entry was posted in RagBlog and tagged Popular Culture, Sports. Bookmark the permalink.