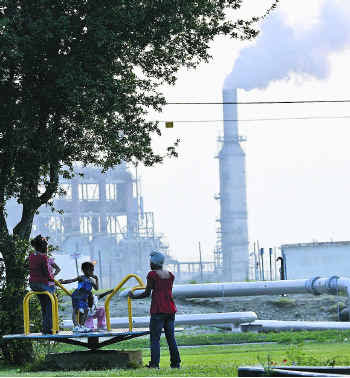 Life in Port Arthur, Texas is about to get worse. Photo by AP.
EPA poised to let Mexican imports be destroyed in Texas town
By Matthew Tresaugue / June 13, 2008

PORT ARTHUR — The west end of this Gulf Coast refinery town is a weedy pocket of poverty, with blocks of shuttered storefronts and blue tarps still covering the rooftops of houses damaged by Hurricane Rita nearly three years ago.

Hilton Kelley, 47, sees his neighborhood’s commercial activity moribund, its residents sick, its children with nothing to do, and he blames the fire-and-fume-belching cluster of oil and petrochemical plants around Port Arthur.

Now the U.S. Environmental Protection Agency is poised to grant a request by the operator of a Port Arthur incinerator to import up to 20,000 tons of highly toxic PCBs from Mexico for their disposal. To many people living on the city’s predominantly black west end, the proposal is the ultimate affront.

“This adds insult to injury,” said Kelley, who heads the Community In-Power and Development Association. “Enough is enough already.”

Veolia Environmental Services’ petition comes nearly 30 years after legislation that banned the manufacture of PCBs, polychlorinated biphenyls, also prohibited bringing them into the United States. The EPA ruled in 1996 that the chemical compounds may be brought into the country for incineration, but a federal appeals court overturned the decision.

Agency officials, echoing the reasons for reversing the ban a decade ago, argue that the destruction of PCBs in this country is safer than allowing stockpiles to fester in Mexico and other nations.

But critics contend that there are cleaner, safer disposal methods for PCBs. When burned, they produce dioxin, which is linked to cancer, brain damage, reproductive problems and other ailments in humans.

Despite precautions, incinerators emit minute quantities that enter the food chain through meat, dairy products and fish — leading some to wonder why Port Arthur residents should again shoulder such an onerous burden.

“They’re getting all of the emissions and none of the prosperity,” said Jim Blackburn, a Houston-based environmental attorney who represented Port Arthur residents in a recent lawsuit over Motiva Enterprises’ expansion plans. “Why should we make an exception to put more pollution on a community that already has taken on more than its fair share?”

Environmentalists have dubbed the area “The Cancer Belt,” but there is no proven link to the refineries and Jefferson County’s cancer rate, which was 23 percent higher than the state overall, according to the Texas Cancer Registry’s most recent data.

The health problem is part of the plight of Port Arthur, where the median household income is about $35,000 a year, less than half of Sugar Land. While there isn’t much left of downtown, new houses, restaurants and big-box stores are sprouting along the corridor leading to Beaumont and away from the biggest plants.

Last year Motiva began an expansion that will more than double the capacity of its Port Arthur refinery to 600,000 barrels a day by 2010 and make it the largest in the country. The plant is across the street from the Carver Terrace public housing project.

The Army also began shipping 1.7 million gallons of a nerve gas byproduct called hydrolysate from Indiana to Veolia’s incinerator, located about five miles west of downtown on Texas 73. The contract is worth $49 million.

Veolia applied to import PCBs in November 2006 before receiving the Army contract. Under the proposal, the company would ship the compounds by truck through Houston to Port Arthur — a distance of about 460 miles from entry points in Brownsville and Laredo.

Mexico now sends PCBs to Europe for incineration, exposing the compounds to loss at sea. The transportation cost for overseas shipment is at least three times more expensive than moving the waste from Monterrey, Mexico, to Port Arthur, according to the company.

The Veolia facility, permitted to handle up to 150,000 tons of hazardous waste per year, burns between 20 million and 30 million pounds of PCB wastes from domestic sources annually. Mitch Osborne, the plant’s general manager, said smokestack tests show the incinerator destroys more than 99 percent of the material.

But environmentalists are not so sure about the plant’s safety record, pointing to the 1,933 pounds of PCBs that it reported releasing into the air in 2006, the most recent data available.

The plant alone accounted for more than two-thirds of the PCB releases nationwide, according to the federal Toxics Release Inventory, which is based on industry estimates.

Osborne said the plant’s estimate is wrong because of a bookkeeping error. In correspondence with the EPA last month, company officials said the amount should be less than one pound.

“If we didn’t think we could do it safely, then we wouldn’t bring it here,” Osborne said. “We have proven our capability over 15 years. It’s safer to burn here than to leave it in place.”

The agency is proposing a one-year exemption for Veolia to import and burn the PCBs because the company “has demonstrated that no unreasonable risk to health or the environment would result,” EPA spokeswoman Roxanne Smith said.

The agency also contends that because the proposal poses no unreasonable health hazards to Port Arthur’s residents, there is no “environmental justice” issue.

Neil Carman, a former Texas Commission on Environmental Quality inspector who now works with the Sierra Club’s Lone Star chapter, said the EPA’s position is “absurd” because “incineration is a dinosaur technology.”

Carman said there are EPA-approved, non-burn technologies that could be used to dispose of the compounds in Mexico. A process called chemical dechlorination, for example, treats the PCB waste with a liquid agent that breaks down the toxins by removing their chlorine components.

“It’s inexcusable for Veolia to burn PCBs because they don’t all burn up,” Carman said, adding that the Sierra Club would sue if the EPA grants the plant’s request. “This could set a precedent that opens up the floodgates.”