Obama getting some tips on Capitol Hill “vlad-handing” from the master?
Obama reading biography of Vlad but spokesman quickly dismisses any plans to impale.
By Jerry and Joe Long / November 26, 2008

Also see ‘Past Legends Pass on Past Lessons’ by Rod Reyes, below.

WASHINGTON — In what could signal a major departure from the conciliatory tone of Doris Kearns Goodwin’s Team Of Rivals, aides to President-elect Obama today confirmed that he is reading a biography of 15th century Balkan ruler Vlad Tepes. Vlad, who on St. Bartholomew’s Day 1459, impaled 30,000 citizens of Brasov for corruption, dined beneath their corpses, then left the putrefying cadavers hanging outside the city walls as a warning, is considered by many Progressives to have provided the only workable model for how to deal with K Street.

An Obama spokesperson was quick to dismiss any thoughts of impaling. Though, off the record, expressed a wish that at some point in the next four to eight years they might come upon Joe Lieberman in the act of bending over.

Beltway pundits had been speculating that because Obama has read biographies of both Andrew Jackson and Aaron Burr he might withdraw the offer of Secretary of State from Hillary Clinton and fire a pistol ball at her. Though David Broder cites Obama’s reading of Julia Child’s The French Chef Cookbook as evidence that Obama will be more inclined to demonstrate to the junior senator from New York how to prevent egg yolks in hollandaise sauce from scrambling. 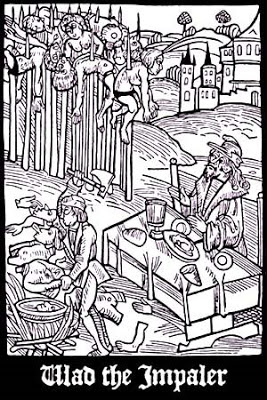 What is on Barack Obama’s reading list? This is among the three most commonly asked questions during this historic transition period, right behind “what kind of dog are you buying” and “didya ask Hillary to be Secretary of State? Didya? C’mon didya”? At least, unlike the Governor of Alaska, he didn’t say “everything, you know, whatever they put in front of me.” Honestly, did she think we’d believe she just devoured the latest issue of Wired, just because someone slipped it onto the coffee table? Obama dexterously confessed to reading The Defining Moment, a retrospective of the first 100 days of the F.D.R. administration, and Team of Rivals, a book devoted to the astute choices of political adversaries for his cabinet by Abraham Lincoln. Nothing like being able to reach for one of these to show that our President-elect is doing his homework.

Certainly, there are few better role models to choose from, although there were some holes in both stories. I for one am curious why Lincoln didn’t include the one enemy who ultimately did him the most harm, John Wilkes Booth. Having him in the cabinet would have at least forced him to sit in front of Lincoln, giving the President a decent chance to duck. Okay, that’s just dumb, but, so is front loading your chief advisory board with too many people who don’t have your best interests at heart. If Obama should happen to include the John Adams biography in his list of “must reads”, he will learn that one of our second President’s gravest errors was in keeping intact the cabinet of his predecessor, George Washington. For the sake of what he believed would be a smooth transition, he surrounded himself with a scorpion’s nest that would bring about his political ruin, in spite of his keeping the nation out of a further war with England.

I don’t believe Barack Obama will be quite so accommodating of the opposition. He is said to be a proponent of dissenting opinion, but I don’t imagine that means taking a kick in the keister every time his back is turned. He will balance his cabinet with a liberal sprinkling of conservatives (there, I got both words into the same sentence), and look to place strong rivals within his own party such as Clinton and Richardson into prominent positions. This shouldn’t be as much of a risk as those Lincoln took. The great dividing issue of his time was slavery. Racism is not the flaming, passion inspiring political plank that slavery was in 1860. For Lincoln to appoint Seward, Chase, and Bates to be his closest advisers took a courage as well as political acumen rarely seen in our history. Surely racism is still a concern, but in fact, it is more of a coffee table issue for Sunday morning news shows to discuss. Bill O’Reilly can debate Rush Limbaugh and Pat Buchanan on how racism is why Republicans didn’t get the black and Latino votes.

The lessons from Roosevelt are even greater, and more appropriate to our present situation (although personally, the lesson I take from F.D.R. is that a cigarette holder makes cancer less menacing). When Joe Biden said that Obama would be tested, the Republicans quickly jumped on this as an indictment of Obama’s inexperience creating an opportunity for the villains of the world to wreak havoc in the U.S.A. The Democrats responded that every new President is tested. Imagine my surprise when I learned that Roosevelt narrowly escaped an assassination attempt less than a month before taking office. Small wonder that he felt obligated to situate several machine gun emplacements throughout the periphery of the inauguration venue. Well, it isn’t as if Roosevelt could have run away from another gunman.

Is that mean? I don’t think so, because history teaches us that perhaps the greatest accomplishment of Roosevelt’s astonishing three terms is his never letting the American public know that he couldn’t fly, much less walk. His successes were as much due to the ebullience of his character, his indomitable cheer and positive attitude as through any of his early policies, many of which failed dismally. There is a generous amount of good will being given to Obama, but it is a double edged sword.

Roosevelt took office when the nation was at rock bottom. There wasn’t anywhere else to go but up. There are even some who suggested that he refused to cooperate with Hoover in trying to do something to make the situation better just so that he could come in and start cleaning things up from scratch. Sounds familiar, but hey, Hoover had years to work on the economy after the crash, much as G.W. Bush had years to ruin the economy before our current situation exploded. I am happy to know that our new President is eager to learn the lessons of the past. Ultimately, it is the history he will help write himself that will be his own, as well as our nation’s new defining moment.