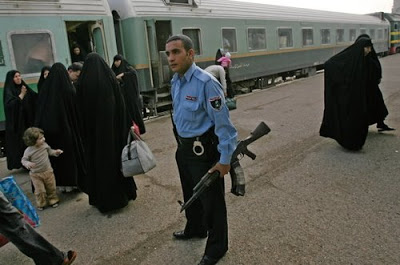 War’s pull at U.S. polls is lessened, even as Iraqis adapt to savage kind of calm…

BAGHDAD — The relative calm that has descended on Baghdad over the past year has helped keep Iraq mostly off center stage as an issue in the U.S. presidential race. But the violence is still at a level that would be intolerable in any other society.

Take the sniper of Mansour, who has killed at least six Iraqi soldiers in recent weeks in this upscale neighborhood, shooting from a distance across crowded shopping streets and a busy traffic circle.

The U.S. military says the sniper is operating as part of a sophisticated, highly trained team affiliated with Al Qaeda in Iraq, the down-but-not-yet-out terrorist group that stubbornly persists in its efforts to stage a comeback.

In bustling Mansour, a mostly Sunni neighborhood in western Baghdad that has sprung partially back to life in recent months, residents seem unconcerned, however.

“It is safe here, very safe,” said Hussein Aamer, 25, who owns a fashion store near the scene of one recent shooting. “Or at least, it’s 90 percent safe. It’s true there is a sniper, and we had some small bombs,” he says, pointing in the directions from which recent attacks had come.

“But still it’s completely different now, like the difference between the sky and the earth, compared to 2007 and before.”

Such is the tenor of life these days in post-surge Baghdad, where the presence of a sniper in a community’s midst can be shrugged off as a minor annoyance compared to the onslaught of car bombings, killings and kidnappings that raged throughout 2006 and much of 2007.

The 80 percent reduction in violence from the peaks of those years has enabled Iraqis to breathe a little easier, open their shops and businesses until well after dark, visit friends in far-flung neighborhoods and even go out at night.

It has also helped minimize the debate about Iraq on the campaign trail.

Yet a recent AP-Yahoo poll found that 74 percent of Americans rated the Iraq War as a “very important” or an “extremely important” factor in their voting decision.

And the lingering level of violence that remains means Iraq is still a chronically unstable, dangerous country, one that is certainly going to thrust itself onto the next president’s agenda regardless of who wins the election.

“Iraq isn’t settled at all,” said Andrew Terrill, a strategic studies professor at the U.S. Army War College in Carlisle, Pa. “Iraq has no shortage of problems that the next president is going to have to deal with. We are not on an easy glide path to a problem-free Iraq.”

Though Baghdad is calmer, it can hardly be called safe. At least one small-scale bombing kills someone, somewhere in the city every day, and on most days more.

The 15-foot concrete barriers dividing Sunni and Shiite neighborhoods remain in place, and few of the more than 2 million Iraqis displaced by the violence have returned home, leaving virtually intact the front lines of the sectarian war that raged until last year.

Further afield, tensions are brewing across northern Iraq between Kurds and Arabs, over land, oil and political power, the issues that lie at the root of all of Iraq’s unresolved problems.

In the south, fierce political rivalries between Shiite factions with close ties to Iran threaten the stability of one part of the country that has remained relatively peaceful.

In Sunni areas, question marks remain about the fate of the 100,000 Sons of Iraq, the members of the Sunni Awakening movement who were paid by U.S. forces to fight Al Qaeda. They are seeking jobs in the security forces, but Iraq’s Shiite-led government has proved reluctant so far to employ Sunnis who may once have fought with the insurgency.

Any or all of these issues could erupt violently at any moment, plunging Iraq back into chaos, said Terrill.

Yet at the same time it is also possible to chart a course toward a more stable future. Under that scenario, Prime Minister Nouri al-Maliki succeeds in steering a path between the ethnic, sectarian and factional rivalries, and the Iraqi army continues to gain in strength, enabling the central government to assert its control as U.S. forces draw down.

Provincial elections due to be held by the end of January, just as the next U.S. president takes office, will be crucial in determining whether Iraq continues to stabilize or slips back into conflict. U.S. officials are hoping that factions currently shut out of power, such as the Awakening and the Sadrists loyal to Shiite cleric Moqtada Sadr, gain enough political representation in local government to deter them from resorting to arms — and that those who lose out accept their loss.

One certainty is that whoever becomes president is going to have to manage Iraq’s problems with fewer and fewer troops on the ground. The Iraqi government is pressing hard for a strict withdrawal timetable, and though the chances are dwindling that a security deal will be signed this year with the Bush administration, the Iraqis will likely sustain that pressure on a new U.S. president.

Sen. Barack Obama says he would bring the troops home by mid-2010, 18 months earlier than the Bush administration. But even if the next president is Sen. John McCain, who has opposed a troop withdrawal timetable, it is unlikely the Iraqi government will accept any deadline later than the end-of-2011 date already offered, said Mahmoud Othman, an independent Kurdish legislator.

On the streets of Mansour, uncertainty about the future mingles with relief that the present is better than the past. As much as Iraqis want U.S. troops to go home, they also fear a sudden departure that would leave a security vacuum to be filled by the extremists on both sides still lurking among them.