Prohibition II : A Trillion Dollars Down the Drain 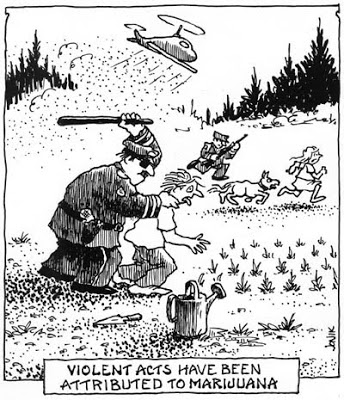 Cartoon from WeedPolitik.
40 Years of War on Drugs:
A trillion bucks and things are worse

Back in 1970, President Richard Nixon was having a lot of trouble trying to get something (anything!) accomplished in Vietnam. So he decided to wage a war that he thought he could win, and most of the American populace would support — a war on drugs. He signed the Comprehensive Drug Abuse Prevention and Control Act. He said, “Public enemy no. 1 in the United States is drug abuse. In order to fight and defeat this enemy, it is necessary to wage a new, all-out offensive.”

Nixon budgeted $100 million, and the “war on drugs” was off and running. Unfortunately, this new “war on drugs” was as flawed and ill-conceived as his plan to burglarize the Watergate Building. President after president took up the same war, and each one upped the amount of money sunk into the program. Now it is 40 years later, and the only thing that has been accomplished is the spending of over a trillion dollars on this exercise in futility. That money has not slowed down the import of drugs into this country or the use of the illegal drugs.

The current United States Drug Czar, Gil Kerlikowske, admits as much. He says, “In the grand scheme, it has not been successful. Forty years later, the concern about drugs and drug problems is, if anything, magnified, intensified.”

His predecessor, John P. Walters, is more hard-headed. He claims, “To say that all the things that have been done in the war on drugs haven’t made any difference is ridiculous. It destroys everything we’ve done. It’s saying all the people involved in law enforcement, treatment and prevention have been wasting their time. It’s saying all these people’s work is misguided.”

Well, yes. That’s exactly what the last 40 years of the “war on drugs” has shown. Much of the work is misguided — especially the money spent on interdiction, arrest, incarceration, and forced drug programs. This approach simply does not work. How many more years and how much more money must we waste before we realize that?

It is said that those who do not learn from history are doomed to repeat that history, and that is obviously true with prohibition. We should have learned from the first time it was tried in this country in the 1920s, when alcohol was outlawed. That did not prevent the use of alcohol. Anyone who really wanted it could still get it. All it did was create a huge black market that made underworld gangs rich and much more powerful. It also increased the violence of these underworld gangs as they struggled to control that black market, and many times that violence spilled over to affect innocent people.

Our second attempt at prohibition, the “war on drugs,” has done exactly the same thing. It has not stopped or decreased drug use. Anyone who really wants to use drugs can easily get them. It has also enriched underworld gangs (we now call them “drug cartels”) and made them very powerful. And it has increased the violence connected with those gangs, with much of that violence spilling over to affect innocent people. And it is all caused by the “war on drugs.”

We had the chance to learn the horrors of prohibition the first time we tried it, but we didn’t. And our failure to learn from past mistakes has been devastating both financially and socially. It does not matter whether the prohibited drug is alcohol, marijuana, or some other drug, the effect of the prohibition is the same.

There were those opposed to legalizing alcohol again. They said it would be terrible for the country, because alcohol use would rise sharply. They were wrong. Education programs alerted people to the effects of alcohol overuse and abuse, and treatment programs did wonders for those who wanted treatment for that abuse. Meanwhile, millions continued to use alcohol recreationally, just as they had under prohibition, without ill effects.

It is just a regrettable fact of life that some will abuse any recreational substance. However, that can be controlled by education and treatment programs. In a free country, we should not punish the millions who use the substances in a controlled and recreational way. And we certainly shouldn’t criminalize those hard-working and decent people (especially those who use harmless substances like marijuana). Legalizing drugs will not destroy our society any more than legalizing alcohol did. Those who want them will get them (just as they do now) and those who don’t won’t.

Instead of spending another trillion dollars trying to stop drug use and failing (while the drug cartels get richer and more violent), wouldn’t it make more sense to legalize drugs and then tax the hell out of them? Let those drugs pay not only for treatment programs and education, but also for many other government functions. It would not only mean less taxes of other kinds, but it would also create many legal jobs and income opportunities. Doesn’t that make sense for a country in the middle of a recession?

Sadly, President Obama is following in the failed footsteps of his predecessors. He has budgeted $15.5 billion just for this year’s “war on drugs” — with $10 billion going to the futile interdiction and law enforcement efforts (and that doesn’t count the billions that will be spent for the incarceration of nonviolent drug users in state facilities). This is just throwing good money after bad into a bottomless pit, and it will accomplish nothing — just like the last 40 years. Frankly, that money could be better spent on food, housing, and health care for needy Americans.

It is time for America to admit that the “war on drugs” has failed. Continuing this program will only result in more failure. The only thing that makes sense is to change our policy and recognize that drug abuse is a medical problem — not a criminal problem. Any money spent on drugs should go into education and treatment programs. And our law enforcement agencies should turn their attention to controlling real crimes — like those committed by violent criminals who attack innocent persons and their property. Meanwhile, recreational substance use should be legalized and taxed. A sensible policy like this will not harm our nation — it will save it.

By using the Freedom of Information laws, the Associated Press has learned how some of our first trillion dollars in the failed “war on drugs” was spent. Here are the figures:

2 Responses to Prohibition II : A Trillion Dollars Down the Drain