PTSD Meds: Killing Soldiers When the Battle’s Over 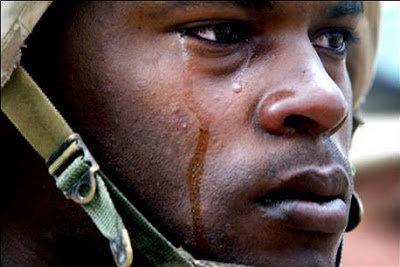 CHARLESTON, W.Va. — Stan and Shirley White’s son Andrew, a Marine reservist, died at home 2 1/2 years after he returned from Iraq. Janette Layne lost her husband, Eric, in similar circumstances after his return from Iraq.

More than a year later, they still don’t know if the medication their loved ones were taking for post-traumatic stress disorder contributed to their deaths.

Andrew White and Eric Layne were taking Seroquel, Klonopin and Paxil, along with prescription painkillers.

Three other West Virginia servicemen have died in their sleep while undergoing PTSD treatment after returning from Iraq.

Investigators from the U.S. Department of Veterans Affairs looked into the deaths. Stan White, who actively researches similar deaths and PTSD-related medications, contacted Sen. Jay Rockefeller, who requested the investigation.

The investigators interviewed the White and Layne families and visited Huntington Veterans Affairs, the Charleston Community Based Outpatient Clinic and the Cincinnati VA residential program, where Layne was treated. They reviewed autopsy and toxicology reports for both patients.

In August, they concluded that White and Layne received care that met “community standards” at the VA facilities, and that the men died from a combination of prescribed and non-prescribed medicines.

“In the presence of PTSD, other mental health conditions, and uncertain use of medications by patients, we are unable to draw conclusions about the relationship between medication regimens and these deaths,” the investigators wrote.

That’s not good enough for some family members.

“I don’t have a direct answer as to why he died,” Janette Layne said of her husband. “Nobody has told me what caused his death.”

The medical examiner listed “overintoxication of medicines” as the official cause of death for both Layne and White. The amounts of prescribed medications in both men’s systems were within acceptable limits, said Janette Layne.

They also had taken some painkillers that hadn’t been prescribed for them, according to Stan White and Janette Layne.

Narcotic painkillers are a leading cause of accidental overdose, and those painkillers can be especially dangerous when used in combination with other drugs.

Stan White and Dr. Fred Baughman, a California neurologist who questions the use of medications to treat mental disorders except in rare circumstances, plan to visit Washington this month, armed with the stories of nine servicemen whose deaths mirror Andrew White’s situation.

The soldiers are from West Virginia, Ohio, Pennsylvania and New York. Some of their families will go to Washington with White and Baughman and meet with their state representatives.

The prescriptions were given by doctors at VA facilities in Huntington, Charleston and a residential program in Cincinnati where Layne had just completed an eight-week in-patient treatment. White’s doctor instructed him to take as much Paxil and Seroquel as needed, Shirley White said.

“They said he had lethal amounts in his system,” she said. “So, no, we don’t have answers.”

Stan White hopes to convince policy-makers in Washington to take a second look at pharmaceuticals prescribed to PTSD sufferers.

How safe are the combinations? How carefully should they be dosed? Should people with PTSD, which sometimes includes forgetfulness and memory loss, be given prescriptions that require careful monitoring?

Despite last August’s report, the Whites are convinced there is a connection to their son’s death.

“I think the goal of talking before Congress is that we don’t think the VA is approaching treatment in the right way,” Shirley White said.

“I’m not a doctor. The medicine might be needed at first, but the soldiers need therapy and counseling,” Stan White said. “I really think that’s the key to this thing.”

Stan White and Baughman track soldiers and veterans who die in their sleep or slumped at work stations. They contact the families when they hear about such deaths to ask about psychiatric diagnoses and medications. Military casualty officers won’t release details.

They found three others from West Virginia. Jeremy Harper, 19, of Dunbar died Jan. 1, 2005, at Walter Reed Army Medical Center while being treated for PTSD. Nicholas Endicott of Logan County, who died at a military hospital in Bethesda, Md., also suffered from PTSD. Derek Johnson, 22, of Hurricane died last year while taking the three drugs.

Baughman notes Seroquel’s link to fatal heart arrhythmias and irregularities. He’s now researching the death of Chad Oligschlaeger, 21, a Texas Marine who died in May while taking six medications for PTSD, including Seroquel.

“I’m telling you right now, these drugs are unfit for human consumption, across the board,” Baughman said. “Their side effects take two to three pages to list.”

Faces behind the figures

When Eric Layne died Jan. 26, 2008, Janette Layne was pregnant and was caring for their 1-year-old son, Shamus. She and her husband served together in the National Guard in Iraq. His PTSD symptoms surfaced shortly after their homecoming.

“We had no idea what post-traumatic stress disorder was. We thought it was something old Vietnam veterans on the side of the street had,” Janette Layne said. “We were working, we had jobs and were well-fed and clean. We couldn’t imagine that would ever be us.”

As Eric Layne became increasingly depressed, angry and short-tempered, his wife encouraged him to seek treatment through the VA. He was reluctant, partially because he sensed an underlying message in the military to “just suck it up,” she said.

“It’s ironic. Eric didn’t want to go and he didn’t want to take medicine,” she said. “They told him just to come and talk. He left with a prescription and the PTSD just got worse.”

When Eric Layne lost his job in the fall of 2007, he entered an eight-week residential care program in Cincinnati where his medications were strictly monitored. He came home on the weekends, and his wife scarcely recognized the detached, exhausted man he had become.

The night he completed the program and came home for good, the Laynes agreed Eric would see a doctor about the side effects of the medicine.

He died that night.

“I’ll never forget that day. I picked up Shamus from day care and a woman asked me if the baby was going to be a boy or girl. When I said she was a girl, the woman said, ‘All you need is a dog and you’ll have the perfect family,'” Janette Layne said. “That night Eric passed away.”

She was overwhelmed with single-parent responsibilities when she delivered their daughter, Jubilee, in May.

The Whites and several other members of a veterans’ family support group stepped up. They scheduled times to visit with her and watched the children so she could run errands or take classes.

“If not for them, I don’t think I could do it,” Janette Layne said.

The Whites spend Thursday evenings with the children, and Shirley White often calls on the weekends to see if she can come over.

“It’s been good for both of us,” Shirley White said. “Some days, just getting up is such an ordeal. Then I remember that we have Thursday to look forward to. Janette and her children have pretty much got us through this year.”

Just 21 months apart, Shamus, 2, and Jubilee require constant attention. The children squeal with delight when they see the Whites. Shamus asks Stan White if they can have chicken nuggets, a treat he often picks up at McDonald’s. In warmer weather, they visit the playground down the road.

“It’s not just they help with the kids. I truly love Shirley and Stan,” Janette Layne said. “They’re the parents I never had.”

Stan White, who teaches ski lessons at Canaan Valley during the week, said he thought Shamus was ready to learn. The Whites’ involvement with her children comforts Janette Layne, who worries about their future without a father.

“I just want there to be more awareness in the military. There are so many broken homes and children without fathers,” she said. “Families are suffering and sometimes they don’t even know what it’s from. When you get home [from military duty] is when the real work begins.”

This entry was posted in RagBlog and tagged Depression, Psychology, U.S. Military, War. Bookmark the permalink.

4 Responses to PTSD Meds: Killing Soldiers When the Battle’s Over