Questions About Israel’s Use of US-Made Weapons

Israel is believed to be using controversial white phosphorus shells to screen its assault on the heavily populated Gaza Strip yesterday. The weapon, used by British and US forces in Iraq, can cause horrific burns but is not illegal if used as a smokescreen. 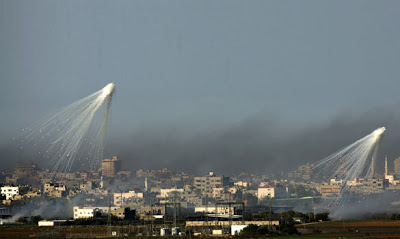 As the Israeli army stormed to the edges of Gaza City and the Palestinian death toll topped 500, the tell-tale shells could be seen spreading tentacles of thick white smoke to cover the troops’ advance. “These explosions are fantastic looking, and produce a great deal of smoke that blinds the enemy so that our forces can move in,” said one Israeli security expert. Burning blobs of phosphorus would cause severe injuries to anyone caught beneath them and force would-be snipers or operators of remote-controlled booby traps to take cover. Israel admitted using white phosphorus during its 2006 war with Lebanon.

The use of the weapon in the Gaza Strip, one of the world’s mostly densely population areas, is likely to ignite yet more controversy over Israel’s offensive, in which more than 2,300 Palestinians have been wounded.

The Geneva Treaty of 1980 stipulates that white phosphorus should not be used as a weapon of war in civilian areas, but there is no blanket ban under international law on its use as a smokescreen or for illumination. However, Charles Heyman, a military expert and former major in the British Army, said: “If white phosphorus was deliberately fired at a crowd of people someone would end up in The Hague. White phosphorus is also a terror weapon. The descending blobs of phosphorus will burn when in contact with skin.”

The Israeli military last night denied using phosphorus, but refused to say what had been deployed. “Israel uses munitions that are allowed for under international law,” said Captain Ishai David, spokesman for the Israel Defence Forces. “We are pressing ahead with the second stage of operations, entering troops in the Gaza Strip to seize areas from which rockets are being launched into Israel.”

The civilian toll in the first 24 hours of the ground offensive — launched after a week of bombardment from air, land and sea— was at least 64 dead. Among those killed were five members of a family who died when an Israeli tank shell hit their car and a paramedic who died when a tank blasted his ambulance. Doctors at Gaza City’s main hospital said many women and children were among the dead and wounded.

The Israeli army also suffered its first fatality of the offensive when one of its soldiers was killed by mortar fire. More than 30 soldiers were wounded by mortars, mines and sniper fire.

Israel has brushed aside calls for a ceasefire to allow humanitarian aid into the besieged territory, where medical supplies are running short.

With increasingly angry anti-Israeli protests spreading around the world, Gordon Brown described the violence in Gaza as “a dangerous moment”.

White phosphorus: the smoke-screen chemical that can burn to the bone

— White phosphorus bursts into a deep-yellow flame when it is exposed to oxygen, producing a thick white smoke

— It is used as a smokescreen or for incendiary devices, but can also be deployed as an anti-personnel flame compound capable of causing potentially fatal burns

— Geneva conventions ban the use of phosphorus as an offensive weapon against civilians, but its use as a smokescreen is not prohibited by international law

— It has been used frequently by British and US forces in recent wars, notably during the invasion of Iraq in 2003. Its use was criticised widely

— White phosphorus has the slang name “Willy Pete”, which dates from the First World War. It was commonly used in the Vietnam era

Note, too, that this behavior dates back to the last conflict with Lebanon. Here is what Congressman Kucinich wrote to Condeleeza Rice on this issue:

I am writing concerning Israel’s military offensive against Gaza, which began on December 27th. I support Israel’s security and its right to exist in peace, without the fear of rocket attacks from Hamas. Moreover, I abhor the violence being visited upon the citizens of our firm ally. However, no nation is immune from the legal conditions placed on the receipt of U.S. military assistance.

I believe that with the current escalation of violence in Gaza, a legal threshold has been reached, warranting a Presidential examination and report to Congress. I hereby request an examination of Israel’s compliance with the provisions of the Arms Export Control Act of 1976 (AECA).

While neither the AECA nor the Foreign Assistance Act of 1961 (FAA) define “internal security” and “legitimate self-defense,” I believe that Israel’s most recent attacks neither further internal security nor do they constitute “legitimate” acts of self-defense. They do, however, “increase the possibility of an outbreak or escalation of conflict,” because they are a vastly disproportionate response to the provocation, and because the Palestinian population is suffering from those military attacks in numbers far exceeding Israeli losses in life and property.

Israel’s current military campaign in Gaza has inflicted a significant toll on Palestinian civilians and society. Israel’s recent aerial and ground offensive against Gaza has killed nearly 600 and injured over 2,500. The Associated Press reported: “children are paying the price… The United Nations has said the death toll includes 34 children… But the broad range of Israel’s targets–police compounds, fire stations, homes of militants, Hamas-run mosques and university buildings–means most shelling is occurring in residential areas.”

The extensive destruction of such civilian institutions violates Article 33 of the Fourth Geneva Convention, which prohibits the wanton destruction of property and collective punishment of a civilian population. There have also been reports of bombings of United Nations (UN) schools, despite the fact that Israeli Defense Forces were allegedly given coordinates of the facilities prior to the current escalation in violence.

The blockade that Israel has imposed on Gaza since 2006 has further exacerbated the extent of collateral damage, as hospitals and morgues have been unable to cope with the magnitude of deaths and injuries as a result of the current escalation in violence and hospitals lack proper supplies needed to treat the injured.

I believe that Israel’s use of defense articles provided by the U.S in the current Gaza military attacks may constitute a violation of the AECA. At a minimum, the conflict is sufficient to warrant an immediate report to Congress as required by 22 U.S.C. §2753. Please contact my office by close of business on January 7, 2009 with the date the report will be submitted.