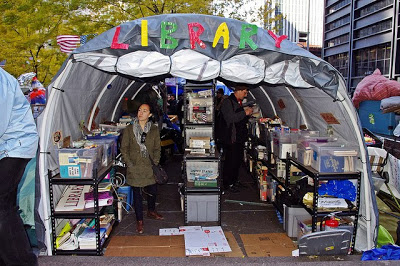 More than 5,000 books in the Occupy Wall Street library were reportedly thrown away when police moved in to remove protesters from Zuccotti Park in New York early Tuesday.

During the police raid, Occupy Wall Street librarians tweeted, “NYPD destroying american cultural history, they’re destroying the documents, the books, the artwork of an event in our nation’s history,” Galleycat reports.
[….]
The library, which started out as a box of books and grew to a collection of more than 5,000, was originally out in the open air. Rocker, poet, and National Book Award winner Patti Smith donated a tent to house the library and protect the books from the weather. — Los Angeles Times / November 15, 2011

Burn Occupy Wall Street’s books? Why would I do that? I had the police dump all 5,000 of their library in a garbage truck. Much less spectacle than burning. The actual stink doesn’t get on TV. Free speech is one thing, but radical sociology, progressive economics, poetry — feh!

That is a made-up quote, but the fact is NOT made up.

Make no mistake, Mayor Bloomberg is a billionaire, high up among the 1%. After serving the two terms allowed by law, he decided he wanted a third. So he used a fraction of his billions — the “philanthropic” fraction — to persuade many New York institutions that had supported the two-term limit, to switch.

That’s what it means to be a billionaire. There’s a limit to how many McMansions, how many bottles of fine wine, you can actually enjoy. But buying power — no limits.

The New York Times called the police action to clear the Occupy Park “almost military.” Here’s one description, vouched for by Rev. John Collins, United Methodist Minister. (After that, some thoughts on what to do.)

The New York Police Department broke up the Occupy Wall Street encampment in Zucotti Park at 1:30 a.m. this morning. Several hours later, on a park bench at the intersection of Sixth Avenue and Canal Street, amid heavy police presence and continuing arrests, I met Jeannie, a woman in her 40’s.

She has been camped in Zucotti Park over a month. She is from California. Her father is a child of the Depression. Her mother and her aunt are out of work, Jeannie has been a financial analyst on Wall Street for 13 years.

I asked why she was part of Occupy. “Because of what I have seen by working on Wall Street.. Goldman Sachs pressured the leaders of Greece and Italy to name bankers to run those countries and bypass the people.”

At about 1:30 I had awakened to get a cup of coffee. Police had surrounded the Park. They put up barricades around the park. I got out of the barricades and tried to get to a nearby mall. The police treated us like the worst kind of terrorists. There were pregnant women in our group.

The police presence was massive, maybe 2,000 police. About 200 people were driven out of the park. Then came the violence. Police started pulling people into the street and then saying, “Now you’re in the street [which is closed]. You’re under arrest.” 10-15 police in full riot gear blocked all the exits. The police then began beating them and using mace and pepper spray right in peoples’ eyes.

It was now 3 a.m. Most of the occupiers had been dispersed. A police helicopter followed our group with searchlights, Police then caught us and arrested many. Those of us who were not arrested walked north to Foley Square near the Federal Court House. Police surrounded us in Foley Square, pushing their billy clubs in front of them and squeezing us into a tight circle.

I learned this morning that they had destroyed our library of several thousand books, many on capitalism, socialism, economics, cooking, children’s stories. They just threw them all into garbage trucks… 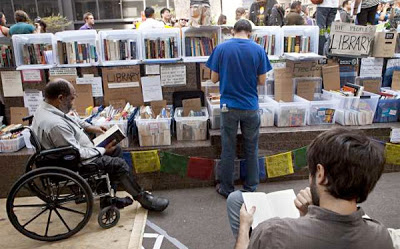 Occupy Wall Street library. Photo from LA Times.
What to do? here is a call from MoveOn activists:

This Thursday there will be a national day of action to express our outrage at what the 1% have done to our nation.

To find the action nearest you, click here and then type in your zip code.

Here’s why this action is more important now than even when MoveOn first scheduled it. New York City Mayor Bloomberg and the wealthy and powerful interests behind him are clearly gambling that the Occupy phenomenon is a fad, and that the 99% is not a real movement, but just a small number of people whom they can intimidate.

It’s up to us to prove them wrong. If people take to the streets in massive numbers on Thursday, we will prove that this is a movement, that We are the 99% — and that it is time for major change in the priorities of this country.

MoveOn has a special role to play in all this. With 5 million members across the country, we have the capacity to turn these Thursday rallies into huge events. But we can’t rely upon emails alone. We need to communicate the urgency of the moment.

Here is what the OWS folks wrote last night, in the midst of the assault upon them:

This moment is nothing short of America rediscovering the strength we hold when we come together as citizens to take action to address crises that impact us all.

Such a movement cannot be evicted. Some politicians may physically remove us from public spaces — our spaces! — and, physically, they may succeed. But we are engaged in a battle over ideas.

Our idea is that our political structures should serve us, the people — all of us, not just those who have amassed great wealth and power. We believe that is a highly popular idea, and that is why so many people have come so quickly to identify with Occupy Wall Street and the 99% movement.

You cannot evict an idea whose time has come.On our shoestring budget, The Shalom Center is vigorously supporting the Occupy movement, MoveOn, and other efforts to combat the pharaohs of our generation — global corporations and the 1%. Please click here to help us do that work. Thanks!

[Rabbi Arthur Waskow is director of The Shalom Center. His newest book, co-authored with R. Phyllis Berman, is Freedom Journeys: The Tale of Exodus and Wilderness across Millennia (Jewish Lights), available from Shouk Shalom our on-line bookstore. Read more articles by Rabbi Arthur Waskow on The Rag Blog.]