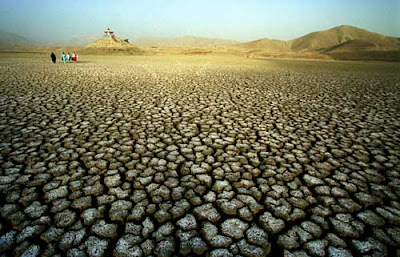 As long as the oil and coal keep pouring CO2 into our planet’s atmosphere, the food will wither, the ice will melt, the oceans will flood, and people will die — and kill.

This past Friday night, I was speaking at a synagogue on the Jewish obligation to reduce the danger of global scorching. One of the congregants asked why I, who had spent so much of my life working for social justice and against war, was now working “instead” on healing the earth.

The answer came Sunday morning, on the front page of the New York Times:

“Recent [Defense Department] war games and intelligence studies conclude that over the next 20 to 30 years, vulnerable regions, particularly sub-Saharan Africa, the Middle East and South and Southeast Asia, will face the prospect of food shortages, water crises and catastrophic flooding driven by climate change that could demand an American humanitarian relief or military response.”

The same Jewish organizations, the same churches, the same Muslim networks that claim to care about the poor of Africa, Asia, and (especially!) the Middle East still see the climate crisis as a side issue that is somewhere down in the middle of their long priority lists. And anyway, it’s all 20 years away or more. Why worry now?

Actually, it isn’t 20 years off. It’s in the present, NOW. Most of the sound and fury expended on “ending the genocide” in Darfur has ignored the underlying causes of the violence there. But the same NY Times article reports that [Senator John] Kerry said the continuing conflict in southern Sudan, which has killed and displaced tens of thousands of people, is a result of drought and expansion of deserts in the north. “That is going to be repeated many times over and on a much larger scale,” he said.

What’s the connection? Formerly flourishing crops withered and died under the baleful heat of planetary climate “change.” When there’s not enough food, people will kill to feed their families. And whole ethnic groups will kill other ethnic groups to make sure their own folks get to eat.

You can proclaim “Never again!” as loud as you like, and insist the UN and the U.S. send peacekeepers, but as long as the food is withering away, the killing will continue. As long as the oil and coal keep pouring CO2 into our planet’s atmosphere, the food will wither, the ice will melt, the oceans will flood, and people will die — and kill.

George Bernard Shaw once wrote (in his play Saint Joan), “Must Christ be crucified in every generation for the benefit of those who have no imagination?”

This fall, prophetic voices like Bill McKibben have called for public actions on October 24 to demand that governments take vigorous action to curb global scorching. A wide swathe of the American Jewish community has called for making that day, the Shabbat when Jews read the biblical story of Noah, the Flood, the Ark, and the Rainbow, into “Climate Healing Shabbat,” with political action during the week before or after and prayer, sermons, discussions, Torah-nature walks, on Shabbat itself.

The international observance of “Global Climate Healing Shabbat Noach” is not the end – but a beginning, or a deepening. It points toward the crucial United Nations conference on the climate crisis scheduled for Copenhagen in December, 2009.

For more information on what you can do, please go here.

On the Shalom Center website are a number of items that may be of use to you:

A chapter, “Rainbow Sign,” from my book GODWRESTLING — ROUND 2, a midrashic examination of the Noah story for its importance in healing our planet today;

“The Return of Captain Noah,” a story by Rabbi Phyllis Berman and myself from our book Tales Of Tikkun: New Jewish Stories To Heal The Wounded World, in which Noah and his wife Naamah awake in our own generation from a long sleep in a cave on Mt Ararat to hear God’s call that the earth and all life are again in danger — and what they do to save it.

A new Haftarah to the Flood/ Rainbow story that came through me several years ago at Elat Chayyim, in my English and Reb Zalman Schachter-Shalomi’s translation into Hebrew.

And this — a song, maybe mostly for children but I have found adults get a great kick out of it as well — “GOD SAID TO NOAH: An Old/ New Song to Avert a New Flood.” It begins this way:

I hope this will jump-start your thinking. Please write me what has begun to percolate for you, and I’ll pass the ideas around.