Rabbi Arthur Waskow : Murder is Murder and Abortion is Not 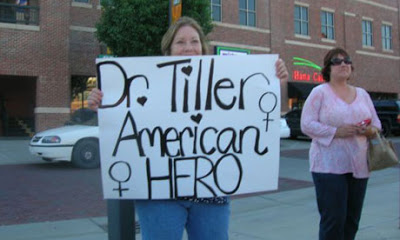 A sign commemorating George Tiller at a candlelight vigil in Wichita, Kansas, where Dr Tiller was murdered on Sunday. Photo by Joe Stumpe / AFP/Getty.

So another physician has been murdered for making it possible for women to actually use their constitutional right to choose an abortion.

All honor to Dr. Tiller, who joins the list of martyrs for ethical decency and human rights, killed for healing with compassion. In his case, a religious martyr in the fullest classical sense, killed in his own church as he arrived to worship, killed for acting in accord with his religious commitments and his moral and ethical choices.

And all dishonor to those vicious attackers like Bill O’Reilly who have egged on the kind of violence that finally murdered Dr. Tiller. And who have blasphemously invoked the name of God to justify these incitements to murder.

There are two real-life cases of abortion that have shaped my own judgment on the practice, in addition to the Torah’s only comment on abortion –- which makes utterly clear that it it is not murder. (The Torah says that if someone causes an abortion but does no other harm to the mother, the agent owes a money recompense to the father for the loss of his potential offspring. And that’s all.)

One of these real-life cases of abortion that have shaped my views is that my father’s mother had already birthed five young boys when she became pregnant again in 1914. She hoped to be able to concentrate her energy on raising those five instead of birthing more. Because abortions were illegal, she had a “back-alley” abortion –- and it killed her. So she was unable to raise any of them. Her early death cast a shadow over my father’s life till his own dying day.

The second is that one of my friends and teachers, a great and eminent rabbi, was the child of a mother who fled Vienna after Hitler annexed Austria. His mother was pregnant again when the family needed to leave, and they knew that the underground “railroad” to freedom was bound to be too arduous for a pregnant woman. The choices were: staying in Austria, to die together; leaving her behind, to die alone; or aborting the fetus, so that all of the family had a chance to live. She had an abortion. Today my rabbi friend says they thought then and ever since that she had given birth to the whole family.

I wish the President, when he spoke at Notre Dame, had said explicitly what these stories teach me: that women are moral beings, possessed of moral agency and responsibility in this unique situation where their own bodies are intertwined with another’s; and that the lives of women would be endangered once again if abortion were criminalized again.

He chose instead to say only that the choices are difficult and that unwanted pregnancies should be minimized.

On this point, I wish he had been specific — that the US government should subsidize comprehensive sex education and the provision of free condoms, The Pill, and other contraceptives in all American high schools, and should require health insurance companies to cover the cost of birth control and abortion.

And I wish that religious communities would begin providing comprehensive sex education as their children reach adolescence (and probably for adults as well). In the Jewish community, for example, this should be part of the preparation for bar/bat mitzvah.

This would in fact be rooted in the ancient rabbinic tradition which defined the moment when a boy became an adult bound by the sacred commitments of mitzvot as the day when he had two pubic hairs. Then the rabbis said that instead of checking individuals, they would settle on 13 years and one day. But the point about puberty and sexual maturity was made. (Indeed, it is probably precisely because of the imperative need for ethical sexual behavior beginning with the onset of sexual maturity that the rabbis thought Jews should at that point be bound by the mitzvot.)

Unfortunately, in modern Jewish life this teaching is prudishly ignored. What rabbi have you heard ever address the new Jewish adult and the adult community about sexual ethics, as part of the public ceremony of welcoming him/ her as a bar/bat mitzvah? Time to renew this ancient teaching!