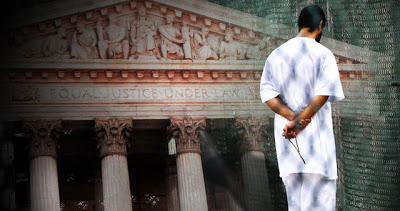 The idea is to make Democrats appear soft on terrorism and legitimize torture and abuses of civil liberties.

Aside from reproductive issues, the Republican hot button issues begin with the letter “G”– God, guns, and gays. Now we are seeing a carefully orchestrated campaign –complete with expensive television advertisements — to add Gitmo as the fourth “G.” The idea is to make Democrats appear soft on terrorism and legitimize torture and abuses of civil liberties.

The drive is being spearheaded by former Vice President Dick Cheney, a truly odious man. He has the full throated support of Karl Rove and former Speaker Newt Gingrich –both masters of demagoguery and political tactics — and the whole stable of political shock jocks. Most recently, the radio propagandists savaged one of their own when a Chicago radio personality experimented with waterboarding and concluded that it was indeed torture!

These people know that a substantial majority of Americans support torture, keeping the Guantanamo detention facility open, domestic spying, and curtailments of civil liberties. These policies are overwhelmingly backed by Republicans and also have the support of independents. The Democrats know this too. That is why they went along with so much Bush legislation in these areas and are now refusing to support President Barack Obama in closing Gitmo. Only six Democratic Senators stood with the president. It is now hard to remember that George W. Bush and John McCain wanted to close Gitmo.

Cheney and the Republicans are seeking to rewrite the history of torture, claiming it produced solid results that permitted them to avert massive attacks on the homeland. The fact is that most torture was used to obtain information to hype the false case that Iraq had weapons of mass destruction and must be invaded. This is to say, torture produced false confessions and bad information used to support the invasion.

The politics of fear worked in 2002-2003, and they are beginning to make it work again. Cheney and his Republican friends warn that closing Gitmo and tightening the rules of evidence in detainee proceedings will result in terrorists walking the streets. The Not in My BackYard strategy lends legitimacy to a pack of thoroughly dishonest arguments. A basic assumption is that everyone now held there is guilty of terrorism. We are also asked to believe that these people would easily escape super-max federal prisons. Though they would be kept away from the general prison population, we are told they would quickly convert minority prisoners into terrorists.

There seem to be few willing to answer the prophets of fear and doom. To do so could result in one being called a friend of terrorists. Given the dominant “he said-she said” approach to journalism, no one with a pen or microphone would dare presenting information to puncture these fables. Republicans have learned to expertly play on the inability of the mainstream media to deal fairly with issues that touch on security matters.

Republicans have seized upon Speaker Nancy Nelosi’s failure to deal well with the matter of the September 4, 2002, CIA briefing on “enhanced interrogation techniques.” She and former Senator Bob Graham said they did not recall waterboarding being mentioned. We now know that one Abu Zubaydah had been waterboarded 83 times before that briefing. Later, in February 2003, a staffer told the Speaker that waterboarding had long been going on. At that point her only choice was to admit that she had been conned by the CIA and that it was not too late to do much other than work to elect a Democratic president. This made it possible for critics to say she 1) should have been able to see through the CIA’s opaque language and 2) insist that she was soft on terrorism while 3) tacitly approving of torture while 4) also besmirching the CIA. These four Republican positions are inherently inconsistent, but almost no one in the mainstream media has pointed to this obvious fact.

Few in the MSM asked her Republican critics if the CIA did not, in the opinion of many, have a record of bending the truth when talking to Congress. These critics should also have been frequently reminded that Rep. Peter Hoekstra, the House Republican expert on intelligence, had also complained that the agency has lied to Congress.

At base, the issue is massive expansion of executive power. The Republican Party had a long and honorable history of opposing expansions of presidential power. This record was badly tarnished by the abuses of executive power under Richard Nixon and Ronald Reagan, and George W. Bush took the abuses of power and big government to new extremes. In 2005 and 2006, moderates within the Bush administration were able to dial back some of the torture.

Now Cheney is leading a successful effort to eradicate this part of the Republican heritage — opposition to executive supremacy and big government. With these elements removed from the Republican credo, it is very hard to understand how that party can continue to call itself conservative. The word will only apply if we reach back to the times when conservative meant backing executive supremacy, the Court of Star Chamber, bowing to ecclesiastical authority, and depriving people of fundamental rights.

The mind boggles a bit at trying to imagine 21st Century people wanting to become known as the party of torture. But this is precisely what is going on, and the GOP could benefit by retaining existing supporters and attracting independents. But maybe the mind should not boggle at this.

The Republicans are not living in this century. They are a party bent on becoming more of a “whites only” men’s club that is overly dedicated to an extreme version of American Exceptionalism, that was popular long ago. It holds that Americans, especially provincials and right-wing Christians, have been gifted by God with the ability to decide which human beings should be treated with dignity and respect. At base they yearn for the days of the House Un-American Activities Committee and Joseph McCarthy, and they are certain they are endowed with the ability to spot un-American attitudes and “reverse racism” at a thousand paces.

This entry was posted in Rag Bloggers and tagged Guantanamo, Republican Party, Terrorism. Bookmark the permalink.