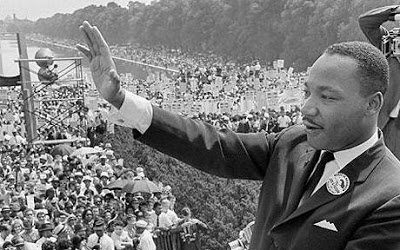 Our Monday gathering was surcharged with the sense that change had already begun in America, and that beginning at noon Tuesday, we could work toward making King’s vision a reality.

On Monday evening, one thousand people jammed All Souls Church in Washington, DC, for our renewal of the teachings of Martin Luther King in his Riverside Church speech of April 4, 1967 — exactly one year before his death. He spoke about undoing racism, militarism, and materialism in American society and moving to create the Beloved Community.

Our Monday gathering was surcharged with the sense that change had already begun in America, and that beginning at noon Tuesday, we could work toward making King’s vision a reality –- instead of struggling desperately as we have the last eight years to prevent America from descending further into war, torture, starker class divisions, and shredding the web of life on earth.

This effort began with a flash of thought that The Shalom Center brought to The Tent of Abraham, Hagar, and Sarah last spring. The Tent enriched and developed it, and then the Washington event was imagined and organized by the Olive Branch Interfaith Peace Partnership.

We intend to revitalize Dr. King’s vision as a guide to “We the People” — for as President Obama said on Tuesday in his Inaugural Address, it is WE, not him, who will make change happen. Below you will find some passages from both speeches. We suggest comparing them to see whether and how Dr. King’s vision can become a yardstick to measure change in these next years.

[We are posting on You-Tube some of the Monday talks as swiftly as we can get the videos together (and special thanks to Charles Lenchner for his work on that). The first two items are my talk in two parts here and Source and here. ]

Monday’s array of religious leadership and passion was extraordinary. It stretched from the heads of the National Council of Churches, the Islamic Society of North America, the Council on American-Islamic Relations, the Unitarian Universalist Association, Common Cause, and the Fellowship of Reconciliation to institutional leaders like Sammi Moshenberg of the National Council of Jewish Women to prophetic figures like Rev. Andrew Marin (an evangelical minister committed to the full inclusion of gay and lesbian sexuality in God’s love), Marie Dennis, Rabbi Michael Lerner, Sahima Faheem Sundas, Rev. Rita Nakashima Brock, Rev. Joan Brown Campbell, Rev. Jim Forbes, Dr. Vincent Harding, Monsignor Ray East, Rev. Osagyefo Sekou, Rabia Harris, and Celeste Zappala. There was music by the All Souls Choirs and by Sweet Honey in the Rock member Ysaye Barnwell. There was a litany of “Ashes, Stones, and Flowers” written by Rev. Patricia Pearce of Philadelphia.

Prayers of heart and soul, wisdom of the intellect, song-filled throats, and dancing bodies joined to celebrate God and the renewal of America. Two of my grandkids – eight and four years old — were there. A specially made videotape from 93-year-old activist Grace Boggs of Detroit was there.

We were not alone. In places as disparate as Judson Memorial Church in New York City and Interfaith Paths to Peace in Louisville, hundreds gathered, studied Dr. King’s Riverside Church speech of April 4, 1967, and pledged themselves to work for the revolution of values he had envisioned.

Below you will find my own connections and comparisons between several passages in Dr. King’s Riverside speech and passages in President Obama’s inaugural address.

They seem to share a strong commitment to ending the sharp divide between the wealthy and the poor, though Dr. King’s remarks are much more pointed.

They share a desire for more diplomacy in world affairs and less dependence on military force – though Dr. King is much stronger in conviction that war will not work to advance our freedom or the world’s. [It is an interesting exercise to insert the word “terrorism” wherever King has “communism.” How does this make us think and feel?]

The President raises an issue that was not on Dr. King’s radar screen a generation ago: the dangers our use of fossil fuels is posing to the web of life itself.
King’s Vision as a Yardstick To Measure Obama’s Policy

MLK: I am convinced that if we are to get on the right side of the world revolution, we as a nation must undergo a radical revolution of values. We must rapidly begin the shift from a “thing-oriented” society to a “person-oriented” society. When machines and computers, profit motives and property rights are considered more important than people, the giant triplets of racism, materialism, and militarism are incapable of being conquered.

…True compassion is more than flinging a coin to a beggar; it is not haphazard and superficial. It comes to see that an edifice which produces beggars needs restructuring.

A true revolution of values will soon look uneasily on the glaring contrast of poverty and wealth.

Obama: Nor is the question before us whether the market is a force for good or ill. Its power to generate wealth and expand freedom is unmatched, but this crisis has reminded us that without a watchful eye, the market can spin out of control — and that a nation cannot prosper long when it favors only the prosperous.

The state of the economy calls for action, bold and swift, and we will act — not only to create new jobs, but to lay a new foundation for growth. We will build the roads and bridges, the electric grids and digital lines that feed our commerce and bind us together. We will restore science to its rightful place, and wield technology’s wonders to raise health care’s quality and lower its cost. We will harness the sun and the winds and the soil to fuel our cars and run our factories. And we will transform our schools and colleges and universities to meet the demands of a new age. All this we can do. And all this we will do…

MLK: A true revolution of values will lay hands on the world order and say of war: “This way of settling differences is not just.” This business of burning human beings with napalm, of filling our nation’s homes with orphans and widows, of injecting poisonous drugs of hate into veins of people normally humane, of sending men home from dark and bloody battlefields physically handicapped and psychologically deranged, cannot be reconciled with wisdom, justice and love. A nation that continues year after year to spend more money on military defense than on programs of social uplift is approaching spiritual death.

There is nothing, except a tragic death wish, to prevent us from reordering our priorities, so that the pursuit of peace will take precedence over the pursuit of war. […]

This kind of positive revolution of values is our best defense against communism. War is not the answer. … We must not engage in a negative anti-communism, but rather in a positive thrust for democracy, realizing that our greatest defense against communism is to take offensive action in behalf of justice. We must with positive action seek to remove those conditions of poverty, insecurity and injustice which are the fertile soil in which the seed of communism grows and develops.

Obama: To the people of poor nations, we pledge to work alongside you to make your farms flourish and let clean waters flow; to nourish starved bodies and feed hungry minds. And to those nations like ours that enjoy relative plenty, we say we can no longer afford indifference to suffering outside our borders; nor can we consume the world’s resources without regard to effect. … With old friends and former foes, we will work tirelessly to lessen the nuclear threat, and roll back the specter of a warming planet…. For the world has changed, and we must change with it…

MLK: Our only hope today lies in our ability to recapture the revolutionary spirit and go out into a sometimes hostile world declaring eternal hostility to poverty, racism, and militarism. With this powerful commitment we shall boldly challenge the status quo and unjust mores and thereby speed the day when “every valley shall be exalted, and every mountain and hill shall be made low, and the crooked shall be made straight and the rough places plain.”

Obama: Recall that earlier generations faced down fascism and communism not just with missiles and tanks, but with sturdy alliances and enduring convictions. They understood that our power alone cannot protect us, nor does it entitle us to do as we please. Instead, they knew that our power grows through its prudent use; our security emanates from the justness of our cause, the force of our example, the tempering qualities of humility and restraint.

I hope you will use this information for study and for developing approaches to action. I would very much like to hear your responses.